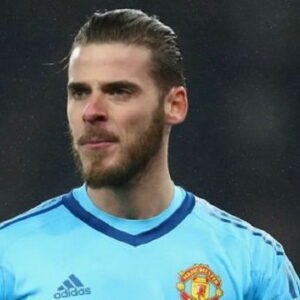 Spanish-born David de Gea plays professional football for “Manchester United” and the Spanish national team. He is largely recognized as the world’s top goalie. He has participated in 300 games since joining “Manchester United” in 2011 and has significantly contributed to his team’s rise to one of the Premier League’s most capable units. David, who was born and reared in Madrid, Spain, has played football since he was a youngster and joined “Atletico Madrid” when he was 13 years old. In 2009, he was eventually chosen for the senior team, and he hasn’t looked back since. He was a key contributor to his team’s success in the 2010 UEFA Super Cup and UEFA Europa League. Since the 2013–2014 season, he has won the “Sir Matt Busby Player of the Year” title three times in a row. With it, he became the first football player in the sport’s history to win the distinction. In 2011 and 2013, he helped his country’s “Under-21” team win the “European Championships,” and as of 2014, he has been a member of the national senior team.

On November 7, 1990, in Madrid, Spain, David de Gea was born. His mother Marivi worked as a housekeeper, while his father Jose was also a goalkeeper. Before they produced David, their only child, his parents had been married for a very long time. When David’s parents were in their 40s, he was born.
David loved athletics, but his mother encouraged him to pay attention to his studies as well. As a result, David did exceptionally well in both fields, but football gradually overtook other interests for him. David had the good fortune to use the best training facilities because his father was a former football player.

David was once an outfield player but was developing into a promising goalkeeper. His youth coach noted that he was competitive in the outfield and had natural talent. He participated on his school’s team as a midfielder. He excelled at both attacking and defending positions up until the age of 14 when he finally realized his affinity for goalkeeping.

He gave goalkeeping his very best effort. He made the decision to put more effort into honing his goalkeeping abilities, taking motivation from his father. He was a tall young man who enjoyed playing basketball in his spare time.

He began his football career when he joined “Atletico Madrid” at the age of 13. He played superbly over the years, and at the age of 17, he eventually received a professional contract.

Over the course of his first several seasons with “Atletico Madrid,” David de Gea demonstrated his goalkeeping prowess. He took home two “Man of the Match” honors in the first 2009–2010 season. His career did not, however, start off very smoothly. In the final few minutes of his first “Championship League” game against “Porto” in September 2009, he conceded two goals. His squad lost the game as a result.

He performed better in “La Liga.” Manchester United, a “Premier League” team, had recently lost legendary goalie Edwin van der Sar and was searching for a suitable replacement. One of the athletes they had been paying special attention to was David. There were rumors that David would eventually sign with “Manchester,” but he surprised everyone by deciding to stay with “Atletico” in 2010.

‘Atletico’ and David got off to a tremendous start in the 2010–2011 campaign. He gave an outstanding performance to ensure his team’s triumph at the “UEFA Super Cup.” As his performance improved, he started receiving compliments from all directions. When the manager of “Manchester United” personally went to the stadium to watch David play, rumors about him joining the team were rife. David put an end to any rumors by saying that he was committed to an agreement with “Atletico” through 2013 and that he would not be leaving before then.

He assisted Spain’s “Under-21” squad in winning the “UEFA European Championship” in 2011, and in June of the same year, “Manchester United” officially announced that they had paid a record price of 18.9 million pounds for David. David debuted for “Manchester United” in July 2011.

In his first game, a friendly match against “Chicago Fire,” on July 23, 2011, he participated. Manchester triumphed 2-1, although David’s initial performance in the competitive tournaments was mixed.

David’s squad lost 1-6 to “Manchester City” in the “UEFA Champions League” in October 2011 as a result of six goals he allowed to be scored against them. The defeat was the worst “Manchester United” had suffered since 1955. Extreme criticism of his performance led the team’s management to decide to replace him in the upcoming games. David acknowledged the failure of his first campaign with “Manchester United.”

David missed the first few games of “Manchester United” in the 2012–2013 season due to the 2012 Olympics, but after the early stumbles, his performance picked up steam. He stopped numerous challenging goals from his opponents in February 2013. By the end of the season, he had been chosen for the “PFA Premier League Team of the Year.” In the 28 games he played in, he finished with 11 clean sheets.

He eventually began his illustrious quest to become one of the most revered goalkeepers in the world throughout the following two seasons. In both seasons, he was named “Players’ Player of the Year.” He received the “Save of the Season” honor for the 2014–2015 campaign. He became the first player to get the accolade three times in a row when, in May 2016, he took home another “Players’ Player of the Year” title for the 2015–2016 campaign.

He was a member of the “PFA Team of the Year” in April 2017. He had been chosen as the team’s goalkeeper four times.

He served as the starting goalkeeper for Spain’s “Under-17” team in 2007, which went on to win the “European Championship” and place first in the “Under-17 World Cup.” He was also chosen to play goalie for his senior team in the 2014 “World Cup.” He assisted Spain in several triumphs in international games, despite the fact that his team was eliminated in the group round.

Additionally, he guided his country’s “Under-21” team to victories at the “European Championships” in 2011 and 2013. Currently, he is thought to be among the finest goalkeepers in the world.

David de Gea is dating Edurne Garcia Almagro, a well-known singer who is five years his senior.
David has hyperopia, which means he has a severe case of farsightedness. To keep his disease from impairing his performance, he wears contact lenses.

David is not just one of the best goalkeepers in the world, but he is also an obsessive metal music fan who frequently attends events in Manchester.

David de Gea is a professional soccer player from Spain with a net worth of $75 million. His $24 million basic pay made him the highest-paid goalkeeper in the world in 2020. In addition, David makes $3 to $5 million a year through endorsements.