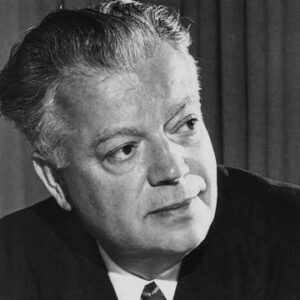 David Dubinsky was a prominent figure in the United States. He rose from humble beginnings as a baker to become one of the Labor Party’s most influential leaders. His journey began as a leader, following his membership in the ‘Baker’s Union. His leadership abilities were recognized, and he was elected to the board of directors of the ‘ILGWU’s ‘Local 10’ association. Since then, he has held numerous positions within the ‘ILGWU,’ operated in difficult situations, and emerged victorious in his endeavors. He has guided the ‘International Ladies’ Garment Workers’ Union’ through turbulent times and has demonstrated his management abilities by transforming the union from a dismal state to one of the most powerful associations in the United States. This leader recognized the plight of laborers and devised reformative and innovative programs to improve working conditions and benefits. These consequential actions by the political leader resulted in an increase in productivity. He was also politically active, and his friendship with American President Franklin D. Roosevelt aided him in reviving the Union’s desolate and debt-ridden state and overcoming the ‘Great Depression”s aftermath.

David Dubinsky was born in Brest-Litovsk, Russian Empire, on 22nd February 1892 to Bezalel Dobnievski and Shaina Wyshengrad (present day Brest, Belarus). The boy was the youngest of five siblings.

His family eventually settled in Lodz, Poland, where his father opened a bakery. He began assisting his father with bakery work and also distributed bread to various shops at a young age. Simultaneously, he attended a Hebrew school and studied languages including Russian, Polish, and Yiddish.

As a teenager, he developed an aptitude for baking and eventually joined the ‘Bakers’ Union, which was affiliated with ‘The Bund,’ an activist union of Jewish laborers.

In 1907, he was briefly detained by the Czarists for his association with the political organization ‘Bund’ in the aftermath of the ‘Russian Revolution of 1905.

He rejoined the union following his release and was instrumental in organizing a bakers’ strike in Lodz. This resulted in his second arrest, and he was sent to Brest-Litovsk. Dubinsky returned to Lodz illegally and resumed his union membership.

In 1908, he was arrested again and even deported to Siberia. David cleverly evaded this exile, returned to Lodz, and resumed his baking work under a pseudonym.

He relocated to the City of New York in 1911, where he began working as a garment cutter and also joined the ‘International Ladies’ Garment Workers’ Union (ILGWU’Local )’s 10′ association.

He was involved in socialist work until his marriage in 1914, when he decided to concentrate on his work and become involved in the union’s local activities.

Dubinsky was elected to the board of members of the union ‘Local 10’ in 1918 and was appointed vice-president the following year.

He was appointed President of ‘Local 10’ in 1920 and General Manager of the union a year later. This position paid him well and eliminated the need for him to continue working as a garment cutter. In 1922, this great leader was elected to the ‘International’s General Executive Board.

Dubinsky campaigned in the ‘ILGWU’ elections for a former ‘Industrial Workers of the World (IWW)’ association member named Morris Sigman. David was a staunch supporter of the latter, who was elected President of the ‘ILGWU’ in 1923.

In 1929, the leader was appointed General Secretary-Treasurer of the same, a position he held for the next thirty years.

This leader was appointed President of the ‘International Ladies’ Garment Workers’ Union’ (ILGWU) in 1932, following the demise of the previous president, and he served in that capacity for more than thirty years.

As a result, he held two significant positions within the ‘ILGWU’ at the same time.

In 1934, he was elected to the executive council of the ‘American Federation of Labor,’ but resigned due to disagreements over providing support for mass-production organization.

He co-founded the ‘American Labour Party’ in 1936 with another labor leader, Sidney Hillman. In 1937, he established the ‘ILGWU’s’ death benefit fund.

As president, he established several departments within the ‘ILGWU,’ including the Management and Engineering Department in 1941, as well as the Legal Department, the Political Department, and the ‘Investment Department’ in the years that followed.

Dubinsky rejoined the ‘American Federation of Labor’ in 1945 as vice-president and was also a member of its executive council.

The ‘ILGWU’s’ staff retirement fund was established in 1946, following a series of negotiations.

Dubinsky was an active member of the ‘Liberal Party’ during the 1950s and continued to lend his support to the party until he retired from the ‘ILGWU’.

He resigned as President of the ‘International Ladies’ Garment Workers’ Union’ (ILGWU) in 1966 and founded the ‘ILGWU Retiree Service Department,’ which he also served as Director. This leader penned his autobiography, ‘David Dubinsky: A Life with Labor,’ in 1977.

Dubinsky transformed the International Ladies’ Garment Workers’ Union (ILGWU) during his presidency, increasing the union’s membership from approximately 45,000 to approximately 450,000.

He pioneered numerous new programs throughout the union, including pension plans, housing, and health centers.

He played a pivotal role in the 1955 merger of the ‘American Federation of Labor’ (AFL) and the ‘Committee on Industrial Organizations’ (CIO).

In 1914, he married Emma Goldberg and thereafter avoided involvement with the ‘Socialist Party’ and cooperative movements. The leader would rather concentrate on his craftsmanship and local labor issues.

Max D. Danish published a biography of David Dubinsky in 1957, titled ‘The World of David Dubinsky.’ Another book based on the life of this prominent leader is Benjamin Stolberg’s ‘Tailor’s Progress: the Story of a Famous Union and the Men Who Made It.’

He is reported to have been ill for a long period of time and died in Manhattan on 17th September 1982. His obituary was published the following day in the newspaper ‘New York Times.’

David is one of the wealthiest politicians and is ranked among the most popular. David Dubinsky’s net worth is estimated to be around $15 million, based on our analysis of Wikipedia, Forbes, and Business Insider.