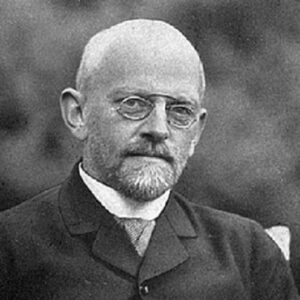 David Hilbert was a well-known German mathematician who contributed to the development of modern mathematical study in the twentieth century. He was the first to recognize the differences between mathematics and metamathematics. David Hilbert, regarded as one of the greatest mathematicians of the twentieth century, made an indelible impact with his enormous knowledge in several branches of mathematics and was the first to establish the invariant theory. His strong mathematical foundation served him well in a variety of fields, from number systems through geometry, extended mathematics, and mathematical physics. His work on integral equations set the groundwork for functional analysis research. He began his teaching career at the University of Königsberg after receiving his Ph.D., where he collaborated with fellow mathematicians Hermann Minkowski and Adolf Hurwitz. Later, he became a Professor of Mathematics at the University of Göttingen, the century’s global academic epicenter. Initially, he focused on number theory and abstract algebra, but he quickly moved on to integral equations, radically revolutionizing the subject. Hilbert space, Hilbert curves, Hilbert classification, and Hilbert inequality are just a few of the major mathematical terminology and theories named after him. He addressed 23 significant topics that had piqued the interest of mathematicians over the century at the Paris International Congress of Mathematicians in 1900. He was a brilliant leader and advocate for mathematics, and he was confident that future mathematicians will solve the 23 issues. Despite the fact that he retired before Nazism rose to power, he survived to see important Jewish faculty members expelled from Göttingen University in 1933.

On January 23, 1862, David Hilbert was born to Otto and Maria Therese Hilbert. He was born in the Prussian provinces of Königsberg or Wehlau (today Znamensk, Kaliningrad Oblast, Russia).

His father, Otto, was a respected municipal judge, and his mother, Maria, was a philosophy and astronomy enthusiast. He excelled in mathematics and showed an interest in language from an early age. He enrolled in Friedrichskolleg Gymnasium in 1872. In 1879, he transferred to the Wilhelm Gymnasium, where he eventually graduated.

He wanted to stay close to home after graduation. He began studying mathematics at the University of Königsberg in the autumn of 1880. He befriended Hermann Minkowski, a younger skilled Polish-German mathematician, at the university two years later.

In 1884, David Hilbert and Minkowski were joined by Adolf Hurwitz, a German mathematician who had recently come as an Associate Professor from Göttingen. The trio began a fruitful and fruitful collaboration that had a significant impact on their mathematical careers.

In 1885, Hilbert obtained his doctorate. Ferdinand von Lindemann supervised his dissertation, which was titled ‘On the invariant features of certain binary forms, in particular the spherical harmonic functions.’ He spent the winter after obtaining his Ph.D. at the University of Leipzig and later in Paris.

From 1886 to 1895, he worked as a Senior Lecturer of Mathematics at the University of Königsberg. He then became Professor of Mathematics at the University of Göttingen in 1895.
The University of Göttingen was a global centre of notable mathematicians in the twentieth century. He met prominent mathematicians such as Emmy Noether and Alonzo Church while he was there. Hermann Weyl and Ernst Zermelo were two of his most notable students.
He oversaw the PhD studies of 69 Göttingen students, many of whom went on to become famous mathematicians themselves, including Otto Blumenthal, Felix Bernstein, Richard Courant, Erich Hecke, Hugo Steinhaus, and Wilhelm Ackermann.

At the International Congress of Mathematicians in Paris in 1900, he presented a list of 23 unsolved mathematical problems. The succinct list paved the way for twentieth-century mathematical works.
In 1902, he was named co-editor of ‘Mathematische Annalen,’ the world’s most prestigious mathematical journal. He remained in the job until 1939. In 1930, at the age of 68, he retired from the University of Göttingen.
Many well-known Jewish academic members at the University of Göttingen, including Hermann Weyl, Emmy Noether, and Edmund Landau, were expelled by the Nazis in the run-up to World War II.
In 1934 and 1939, he co-authored the famous book ‘Grundlagen der Mathematik,’ which was published in two volumes. The book was written as a sequel to Hilbert and Ackermann’s ‘Principles of Mathematical Logic’ (1928).

He, like Minkowski, was fascinated by mathematical physics. Three Nobel Laureates in Physics, Max von Laue, James Franck, and Werner Heisenberg, spent a significant portion of their careers at the University of Göttingen throughout his lifetime.

He wrote a book called “The Foundations of Geometry” in 1899, in which he illustrated a set of axioms that eliminated the mistakes in Euclidean geometry. He wanted to axiomatize mathematics as well.
He gave a speech at the Paris International Congress of Mathematicians in 1900 titled “Mathematical Problems.” He enumerated 23 mathematical issues that needed to be solved by mathematicians in the twentieth century. These difficulties are now known as Hilbert’s problems, and many of them are still unsolved today.
David Hilbert excelled in axiomatic theory, algebraic number theory, invariant theory, class field theory, and functional analysis, among other topics of mathematics. He created the idea of ‘Hilbert space,’ which is now one of the most significant in functional analysis and current mathematical physics.
He pioneered new branches of mathematics such as modern logic and met mathematics. Another notable addition of his work was ‘Satz 90,’ a theorem based on relative cyclic fields.

At the first award ceremony of the Wolfgang Bolyai Award of the Hungarian Academy of Sciences in 1905, Hilbert received a special commendation.

David Hilbert was a Reformed Protestant who was baptized and raised in the church. Later in life, though, he became a skeptic. He claimed that mathematical truth existed independently of God’s existence.

He married Käthe Jerosch in 1892. The couple produced a son named Franz Hilbert (1893–1969) while living in Königsberg. Franz had an undiscovered psychological disorder his entire life, which caused his mathematician father much disappointment.

The Nazis had already re-staffed practically the whole university by the time he died on February 14, 1943, replacing all the Jews. His funeral was attended by a small number of individuals, and his death was only discovered months later.

David Hilbert’s net worth is estimated to be $ USD 4 million, with a primary source of income as a philosopher, university teacher, and mathematician. We don’t have enough information about David Hilbert’s cars or lifestyle. These details will be updated as soon as possible.

Hermann Minkowski, a well-known fellow mathematician, was his “best and truest friend.”