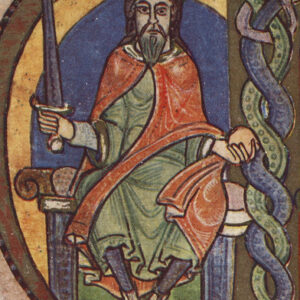 David I of Scotland
Historical Personalities

More Facts of David I of Scotland

David I ruled Scotland from 1124–1153. Born to Malcolm III of Scotland and Margaret of Wessex, he had a terrible childhood despite being a royal. When David was a small lad, his father and brother were slain in an invasion of Northumberland, and shortly after, his mother died. His uncle Domnall Bán took over Scotland and exiled David and his siblings. David then moved in with his English uncle, King Henry I. Years later, with the help of Henry I, David became King of Scotland. During his reign, Scotland underwent major social, political, and religious transformations, making him one of the most influential monarchs in Scottish history. During his reign, Scotland saw a major transformation, dubbed the ‘Davidian Revolution’ by modern researchers. He was famous for constructing monasteries and implementing the Gregorian Reform.

Early Childhood of David I of Scotland

David was born in 1083, the youngest son of King Malcolm III of Scotland and Queen Margaret. He was his father’s eighth son. Duncan I was his grandfather.

In 1093, during a Northumberland attack, his father and brother Edward were killed. Sadly, the young boy’s mother died soon after.
His uncle Domnall became king of Scotland and exiled David and his brothers. King Henry I of England, became his in-law.

David married Matilda of Huntingdon, daughter and heiress of Waltheof, Earl of Northumbria, in 1113. He gained the English earldom of Huntingdon and influence over various English territories through this marriage.
David’s brother Alexander I became king of Scotland in 1107, and with Henry I’s help, David claimed his inheritance.

He gained Roxburghshire, Selkirkshire, Berwickshire, Peeblesshire and Lanarkshire in southern Scotland. He was also known as ‘Princeps Cumbrensis’ (Prince of the Cumbrians).
His inheritance increased his authority and height. David’s life after 1114 is unknown, however it is assumed he spent much of it in England and Normandy.

Scottish King Alexander I died in 1124. David, aided by Henry I, defeated Alexander’s son Máel Coluim in two battles. David became King of Scotland after the victory.
King Henry I died on December 1, 1135. No legitimate sons left, he made Empress Matilda the heir. Upon his death, his nephew Stephen ascended.

David saw Matilda as Henry’s true heir and declared war against King Stephen. Carlisle, Wark, Alnwick, Norham, and Newcastle castles were all occupied by early 1136.
Although David invaded England to support his niece Matilda, he was actually attempting to expand his own realm. He lost the Battle of the Standard in 1138. Despite this defeat, he continued to campaign and eventually gained control of much of northern England.

David I was a ruler who brought important social, cultural, and religious reforms to Scotland. His reign was so culturally significant that the developments in the Kingdom of Scotland were dubbed the “Davidian Revolution”.
He founded many monasteries, including Selkirk Abbey for the Tironensian Order, Melrose Abbey for the Cistercian Order, Newbattle Abbey in Midlothian, Kinloss Abbey in Moray, and Holmcultram Abbey in Cumberland.

Grandiose of David I of Scotland

David I was one of Scotland’s most important rulers. During his rule, the kingdom underwent a “Davidian Revolution” of sorts. During his reign, Scotland saw new governmental procedures and ecclesiastical changes.

Personal Legacy of David I of Scotland

David I was unwell in his later years. His son Henry, Earl of Northumberland, died in 1152, further shattering him. David, in terrible health and near death, named his grandson Malcolm IV as his successor. David died in 1153.

The estimated net worth of David I of Scotland is unknown.