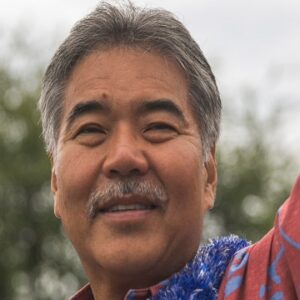 Governor of Hawaii David Yutaka Ige is an American politician of Japanese heritage who was elected in 2014. From 1994 to 2014, he was a member of the Hawaii State Senate, representing District 16 for the Democratic Party. He ran on a platform of bringing a change in leadership to advance the people of Hawaii forward as a whole, rather than dividing the populace by handing out special privileges. Ige believed that the State Government might perform better if it operated like a business, with the goal of regularly delivering deliverables on time and on budget. He also stated that he will respect Native Hawaiian culture and customs. Ige was a brilliant student and athlete in his early years, and he has served in leadership capacities as student body president on several occasions. Prior to his political career, he was a successful electrical engineer who spent 34 years in the information technology and telecommunications industry with a variety of organizations. He married Dawn Amano-Ige, whom he met while studying at the University of Hawaii for a bachelor’s degree. Lauren, Amy, and Matthew are their three children.

Tokio and Tsurue Ige gave birth to David Ige on January 15, 1957, in Pearl City, Hawaii. He is the fifth of six sons in his family. During World War II, his father was a member of the US Army’s 100th Battalion, 442nd Regimental Combat Team, and was awarded the Purple Heart and the Bronze Star. After the war, he began working as a steelworker. Ige’s mother has worked as a dental hygienist and a nurse.

Ige went to Pearl City Elementary School, Highlands Intermediate School, and Pearl City High School during his childhood. In his junior year, he was voted vice president of the student body, and the following year, he was elected senior class president.

He was an avid participant in community sports during his school years, and he played in the Pearl City Little League for eight years. For guiding his varsity tennis team to a championship, he was named ‘Scholar-Athlete of the Year.’
Despite being admitted into M.I.T., Ige completed his bachelor’s degree at the University of Hawaii at Manoa. During this period, he was exceedingly active, serving not only as president of the student body, but also as treasurer and vice-president of his fraternity, Phi Delta Sigma.

At Pacific Analysis Corporation, David Ige began his professional career as an electrical engineer. From 1979 to 1981, he worked there as a Research Analyst and an Electronics Engineer.

Ige began working for Pihana Pacific in 1999 as a Project Engineer/Senior Principal Engineer and stayed for two years. In Hawaii and the Pacific, the business built the first world-class data center and carrier-neutral Internet exchange.

After that, Ige became the Vice President of Engineering at Net Enterprise. Prior to running for Governor of Hawaii, he worked at Robert A. Ige and Associates as a program/project manager from 2003 until 2014.

He spent nearly two decades in the Hawaii State Senate before launching his governorship candidacy. From 1995 to 2014, he was the representative for District 16.
In 2012, he defeated Republican rival Mike Greco for reelection to the Hawaii State Senate. Greco was Ige’s first rival in almost a decade in a general election.

Ige was elected Governor of Hawaii in 2014 after winning the open gubernatorial seat. In August of that year, he defeated incumbent Governor Neil Abercrombie in the Democratic primary. In the general election in November, he defeated Republican candidate Duke Aiona and Independent candidate Mufi Hannemann.

On December 1, 2014, Ige was sworn in as Hawaii’s eighth governor. “Honoring the past while establishing a new tomorrow” was the subject of his inauguration. He paid tribute to his father, who served in the US army, during his inauguration.

During his congressional career, David Ige has chaired nine different committees, including the Education, Health, and Ways and Means committees. He mostly focused on policy related to technology and telecommunications. He was a co-author of the Hawaii Telecommunications and Information Industries Act, which founded the Hawaii Information Network Corporation and built the state information network.
His goal has been to diversify the economy of Hawaii. He was in charge of building seed capital and venture capital programs, as well as software development and technology transfer activities.

He was named “Scholar-Athlete of the Year” after leading his varsity tennis team to a championship. He graduated from high school in 1975, finishing sixth out of more than 500 students. In 1986, Hawaii Business magazine recognized him one of the top 10 MBA students at the university.

During his tenure at the University of Hawaii, David Ige met his future wife Dawn Amano. At the time, Dawn was pursuing a bachelor’s degree in journalism. Lauren, Amy, and Matthew, the couple’s three children, are currently pursuing degrees in mainland universities.
Tokio Ige, his father, died in 2005 at the age of 86. His mother now resides in Pearl City as a retiree.

David Ige’s net worth is expected to be $10 million USD by 2020. He earns all of his money as a politician and a responsible person in politics by working hard. David’s annual income is expected to be about $149,000. He is the 31st highest-paid governor in the United States. David’s net worth has risen as a result of this, as well as the revenues from other parliamentary positions.

Following the terrorist attacks in Paris on November 13, 2015, David Ige firmly endorsed President Obama’s plan to accept 10,000 new Syrian refugees into the United States. According to him, Hawaiian culture embraces “all people with tolerance and mutual regard.”