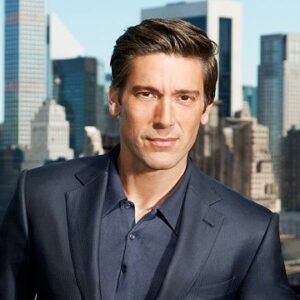 David Muir is an American journalist and broadcaster who is best known for hosting the ABC news show ‘World News Tonight with David Muir’ and serving as a co-anchor for the ABC News magazine ’20/20.’ His broadcast has become America’s most watched newscast, thanks to dramatic visual footage, celebrity gossip, and his passionate gestures. His Emmy-nominated series ‘Made In America’ is also well-known. He was the main substitute anchor for his predecessor Diane Sawyer before taking over ‘ABC World News Tonight.’ He has reported for ABC News on a number of primetime specials, including ‘Breaking Point: Heroin in America’ and ‘Flashpoint: Refugees in America.’ He has been to Gaza, Egypt, Iran, Somalia, Japan, Peru, Ukraine, Haiti, and the Gulf of Mexico to report news. He has garnered numerous ‘Emmy Awards,’ ‘Edward R. Murrow Awards,’ and Associated Press distinctions.

David Jason Muir was born in Syracuse, New York, on November 8, 1973, and grew up in an Onondaga Hill Roman Catholic family. Pat Mills and Ronald Muir, who later divorced, had him as their second child. He also has two younger step-siblings.
He aspired to be a television journalist as a child, and while at Onondaga Central Junior-Senior High School, he used to read the school announcements like a newscast every morning. He was an intern at Channel 5 and had a part-time job bagging groceries at Wegmans Fairmount at the time.
He enrolled in Park School of Communications at Ithaca College after finishing high school in May 1991, and graduated magna cum laude with a B.A. in Journalism in May 1995. He studied political journalism at Georgetown University and spent a semester studying abroad at the University of Salamanca in Spain while still in college.

David Muir, who joined WTVH-TV in Syracuse in 1995 as an anchor and reporter, covered the assassination of Israeli Prime Minister Yitzhak Rabin in Jerusalem, Tel Aviv, Israel, and the Gaza Strip. The Radio-Television News Directors Association and the Associated Press immediately recognized him as one of Syracuse’s “Best Local News Anchors.”
He joined WCVB television in Boston in 2000, and during his three-year tenure there, he ran a series following the trail of the 9/11 hijackers. The Associated Press honored his work once more, awarding him the regional ‘Edward R. Murrow Award’ and the ‘National Headliner Award’ for the investigations.
In August 2003, he began his lengthy affiliation with ABC News as the host of the overnight news show ‘World News Now.’ He later became the anchor of ABC News’ early morning show ‘World News This Morning,’ which is currently renamed ‘America This Morning.’
When Hurricane Katrina reached New Orleans in September 2005, Muir was stuck within the Superdome and reported on the deteriorating conditions inside the Convention Center and Charity Hospital, which were both fighting chest-deep waters.
Since 2006, he has been co-anchoring the newsmagazine show ‘Primetime’ on occasion. In June of the following year, he began anchoring the show ‘World News Saturday.’
In October 2006, he flew to the Israeli-Lebanon border to report on Israel’s battle with Hezbollah, and in March of the following year, he reported from inside the Gaza Strip on Hamas’ takeover. In October 2007, he traveled to Peru to cover the country’s deadliest earthquake in over two decades, and in September 2008, he reported from Ukraine.
In April 2009, he and Diane Sawyer reported on weapons in America on a ’20/20′ hour, then in May, he did another ’20/20′ to expose a huge increase in the number of homeless children in America. He covered the horrific earthquake in Haiti in January 2010 and returned multiple times to investigate women’s assaults and report on the mental health issue there.
He covered the BP oil spill in the Gulf of Mexico many times in April 2010, and the fatal tsunami and nuclear power plant accident in Fukushima, Japan, in March 2011. Following that, he covered Egypt’s political upheaval, the famine in Mogadishu, Somalia, and President Obama’s visit to the Newtown, Connecticut, school massacre and the Aurora, Colorado, movie theater mass murders.
He became the only anchor of his own weekend newscast show, ‘World News with David Muir,’ in February 2012, and the ratings for weekend evening broadcasts have steadily increased since then. Later that year, he was one of ABC’s top correspondents for the 2012 U.S. Presidential election, where his interview with Republican contender Mitt Romney made global news. His ‘Made In America’ series on the American economy has been a hallmark of his presentations, including other TV shows that he co-hosted, such as ‘The View.’ In March 2013, he was chosen to co-anchor ABC’s ’20/20′ with Elizabeth Vargas, earning him another another promotion.
He had been the principal substitute for ‘World News with Diane Sawyer’ for a while, but in September 2014, he ultimately succeeded Diane Sawyer as the anchor and managing editor of ‘ABC World News.’ In April 2015, the program was renamed ‘World News Tonight with David Muir,’ and it became the most-watched evening newscast in the United States.
He aired exclusive interviews with Apple CEO Tim Cook during his company’s legal struggle with the FBI over unlocking the iPhone of the San Bernardino shooter, as well as former President Barack Obama during his historic visit to Cuba. He was also the first person to interview President Donald Trump following his inauguration, which he later described as “awkward.”

For the first time since September 7, 2009, David Muir’s ‘World News Tonight with David Muir’ has surpassed NBC Nightly News as America’s most watched primetime newscast. He was already one of America’s most recognizable journalists prior to taking over the show in 2014, garnering the most airtime in 2012 and 2013.

For his work as a national and international journalist, David Muir has received numerous ‘Emmys’ and ‘Edward R. Murrow Awards.’ In 2013, he was selected one of the ’12 to Watch in TV News’ by ‘TV Week,’ and in 2014, he was named one of People Magazine’s ‘Sexiest Men Alive.’
He was awarded honorary doctorates from Ithaca College and Northeastern University in 2015, as well as the “Jessica Savitch Award of Distinction for Excellence in Journalism.” In 2017, Temple Adath Yeshurun in Syracuse awarded him “Citizen of the Year.”

David Muir mentors young students at Ithaca College, and he was the school’s commencement speaker in May 2011. He also gave commencement talks at the University of Wisconsin-Madison in Madison and Northeastern University in Massachusetts.

David Muir has a net worth of $20 million dollars.

David Muir had informed his sixth-grade teacher that he wanted to be a newscaster and take Matt Lauer’s job, and he had written to Channel 5 anchor Ron Curtis for career advice. He began volunteering at Channel 5 studios on James Street, carrying tripods, receipts, or fetching beverages, encouraged by his typewritten response that he could thrive despite stiff competition in the profession.