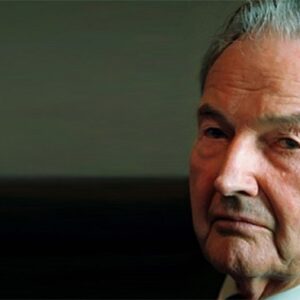 At the time of his death in March 2017, David Rockefeller was an American financier and philanthropist, as well as the oldest living member of the well-known Rockefeller family. For numerous years, he was the chairman and chief executive of the Chase Manhattan Corporation. After finishing his studies, he worked for the government for a few years before joining the military during World War II. He worked for military intelligence during the war years, establishing political and economic espionage groups in France and North Africa. Following the war, he began his financial profession. He began his career as an assistant manager in a bank’s foreign department, quickly rising through the ranks to assistant cashier, second vice president, and finally vice president. He was active with the Council on Foreign Relations and the Centre for Inter-American Relations, which sparked his interest in Latin American and international issues. He was well-known for his expertise in international finance and was well-known among world leaders and ministers. He died in 2017 at the age of 101, and at the time of his death, he was the world’s oldest billionaire.

He received his elementary and secondary education at Columbia University’s Teachers College’s Lincoln School. In 1936, he received his B.S. degree in English, History, and Literature from Harvard University.

David Rockefeller served as a secretary to New York City Mayor Fiorello H. LaGuardia and briefly as an assistant to the regional director of the United States Office of Defense and Health and Welfare Services.

Following the attack of Pearl Harbor, he enlisted in the United States Army. He worked as an assistant military attaché in Paris before serving in France and North Africa.

In 1945, he was promoted to captain and was relieved of his duties. He was successful during his tenure and was recognized for his hard work on several occasions.

He began his career as a banker in the United States in 1946, when he joined the Chase National Bank.
He quickly advanced through the ranks of the bank, eventually reaching the post of senior vice president in 1952. He extended Chase’s operations in Latin America and handled the Bank of Manhattan’s merger with Chase National in 1955.

The Council of the Americas was founded in 1965 by Rockefeller and other corporate leaders to promote and encourage economic integration between North and South America.

David Rockefeller became the bank’s CEO and Chairman in 1969, and he stayed in those positions until 1980 and 1981, respectively.

David Rockefeller retired in 1981, and he was a global leader in the fields of banking, international affairs, and public service at the time.

David Rockefeller, like his grandfather John Davison Rockefeller, Sr., was a prominent philanthropist who worked in a variety of sectors including medical, education, and research.

In 1940, he volunteered at the Rockefeller Institute for Medical Research, and in the 1960s, he collaborated with Detlev Bronk to transform the institute into Rockefeller University, the first institution in the United States dedicated entirely to biomedical research.

David was a strong supporter of Manhattan’s cultural growth, and he also sat on the board of directors of the Museum of Modern Art. As head of the Downtown-Lower Manhattan Association, he also contributed to the development of lower Manhattan.

He gave a stunning $100 million to his alma school, Harvard University, in 2008. It was the most significant gift an alumnus had ever given to Harvard.

The American Institute of Architects presented him with the Award of Merit in 1965.
He was honored by the United States Council for International Business with the International Leadership Award in 1983.

He received the Hadrian Award from the World Monuments Fund in 1994 for his dedication to the preservation of art and architecture.

In 1940, David Rockefeller married Margaret McGrath, and the couple had six children: David Jr., Abby, Neva, Peggy, Richard, and Eileen. In 1996, his wife passed away.
Rockefeller was a robust and long-lived man. On March 20, 2017, at the age of 101, he died of congestive heart failure.

David Rockefeller’s net worth was estimated to be around $3.3 billion at the time of his death.

He successfully underwent his sixth heart transplant at the age of 99.
“No one should feel bad about generating money,” he famously stated, and he has lived up to that promise.