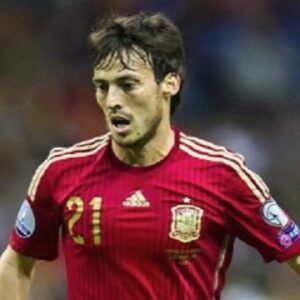 David Josué Jiménez Silva is a Spanish professional football player who now represents the Spain national team as well as Manchester City F.C. Silva is mostly a left-footed footballer who plays as a center midfielder or attacking midfielder. He can, however, also play as a second striker or as a winger. He began his football career with the ‘UD San Fernando’ youth club, and at the age of 14, he joined the ‘Valencia CF’ youth wing. In the 2004–2005 season, he made his professional debut with the Spanish football club ‘Sociedad Deportiva Eibar,’ after being loaned by ‘Valencia.’ He joined ‘Manchester City’ after a six-year stint with ‘Valencia,’ which included a ‘Copa del Rey’ victory in 2008. The ‘FA Cup,’ two ‘Premier League’ crowns, and three ‘League Cups’ are among his achievements. Many consider Silva to be one of the best midfielders in the world, and he has earned nicknames like “El Mago” and “Merlin” for his exceptional ball-control and passing abilities. With 35 goals, he is the fourth-highest goal scorer in Spain’s history, and he has also earned 100 caps. He was a member of squads that won three consecutive international tournaments: the UEFA Euro 2008, the 2010 FIFA World Cup, and the 2012 UEFA Euro.

Fernando Jiménez and Eva Silva had him on January 8, 1986, in Arguinegun, Gran Canaria, Canary Islands, Spain. His father, a Spanish-born municipal police officer, was in charge of the ‘Valencia CF’ stadium’s security. His mother is of Japanese ancestry, according to the Canarian press.

He began his football career with the UD San Fernando youth squad. He began his career as a goalkeeper before switching to winger. He joined ‘Valencia CF’ as a youth player at the age of 14 and remained with the Spanish football club’s youth set-up until he was 17 years old.

During his first appearance for Spain, he scored three goals in the 2003 ‘FIFA Under-17 World Championship’ in Finland. After being loaned by ‘Valencia,’ he made his professional debut with ‘Sociedad Deportiva Eibar’ in the 2004–2005 season. The following season, he was loaned to the Spanish professional football team ‘Celta de Vigo.’ At the 2005 ‘FIFA World Youth Championship,’ he scored four goals.

He returned to ‘Valencia’ in the summer of 2006. He scored his first league goal on November 5, 2006. In 2006, he was nominated to the Spanish national ‘Under-21’ football team, and on November 15, that same year, he made his senior international debut.

Silva was named to the ‘UEFA Euro 2008’ team of 23 players.
While many ‘Premier League’ clubs expressed interest in Silva, he chose to extend his contract with ‘Valencia’ for another five years in August 2008. In 2008, he won one ‘Copa del Rey,’ his first in Spain, when ‘Valencia’ defeated ‘Getafe’ 3–1, winning the cup for the seventh time in the club’s history.

During the 2009–2010 ‘La Liga’ season, he set a new career high with eight goals.
On July 14, 2010, ‘Manchester City’ signed a four-year contract with Silva. Roberto Mancini, the club’s manager, initially used him as a winger. Silva was promoted to trequartista later in his first season.
David made his ‘Premier League’ debut against ‘Tottenham Hotspur’ at White Hart Lane on August 14, 2010. On September 16, that year, he scored his first goal for ‘Manchester City’ in a match against ‘Red Bull Salzburg.’ On October 17 of that year, he scored his first league goal against ‘Blackpool.’

From October to December 2010, his outstanding performance earned him three consecutive ‘Manchester City Player of the Month’ accolades. In his first season, he had 15 assists and established himself as one of the league’s best players.

In the following season, he repeated his outstanding achievement. He was selected ‘Man of the Match’ in two matches in the 2011–2012 ‘Premier League,’ against ‘Swansea City’ and ‘Bolton Wanderers,’ respectively. On October 1, 2011, he was named Premier League Player of the Month for his outstanding performance on the field.

Spain won the ‘UEFA Euro 2012’ title with a 4–0 victory over Italy at the ‘Olympic Stadium’ in Kiev, Ukraine, on July 1, 2012. Silva scored the game’s opening goal. With two goals and three assists, he was a model of efficiency throughout the competition. As a result of his efforts, he was chosen to the UEFA Euro 2012 Team of the Tournament.

He was named ‘Etihad Player of the Month’ in February 2015. On March 4, 2015, he scored against ‘Leicester City,’ leading ‘Manchester City’ to a 1–0 victory. With this, he became the first player in league history to score ten league goals in a season.

On February 28, 2016, he won his second ‘League Cup’ with ‘Manchester City,’ after the team defeated ‘Liverpool’ 3–1 in a penalty shoot-out in the 2016 ‘Football League Cup’ finals held at the ‘Wembley Stadium,’ London.
In 2016–2017, he received his first ‘Etihad Player of the Season’ award after appearing in 44 games and scoring eight goals while also contributing many assists.

Silva started the 2017–2018 season with 8 ‘Premier League’ assists in 14 appearances. With this, he set a new record for the most goals scored by a player in Europe’s top five leagues. On November 30, 2017, ‘Manchester City’ agreed a one-year contract extension with Silva, committing to keep him until 2020.

On January 3, 2018, he released a statement indicating that he had not been a part of ‘Manchester City’ since December 2017, and that he needed time away from the game due to the extremely preterm birth of his son, Mateo, who was fighting for his life.

David Silva has a net worth of $55 million.