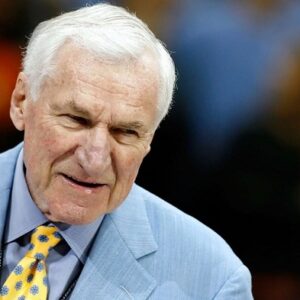 Dean Edwards Smith was a former collegiate basketball coach in the United States. His coaching career at the University of North Carolina at Chapel Hill spanned 36 years. With 879 victories, he retired as the most successful men’s collegiate basketball coach in NCAA Division I men’s basketball history. Smith led his team to two national championships and was voted National Coach of the Year four times and ACC Coach of the Year eight times during his coaching tenure. He was regarded as a great coach since 96.6 percent of his players graduated, and several of them, notably Michael Jordan and James Worthy, went on to become NBA stars. Other players, such as Larry Brown and Roy Williams, went on to become successful university and professional coaches. Smith was also noted for his strong commitment to racial integration; in the 1960s, he was one of the first white coaches in the South to recruit African-American players. President Barack Obama awarded him the Presidential Medal of Freedom for his efforts and creativity. He was called a “coaching legend” and inducted into the Basketball Hall of Fame.

Dean Smith was born in Emporia, Kansas, on February 28, 1931. Alfred Smith, his father, was the basketball coach for the Emporia High Spartans, and his mother was a public school teacher.

Smith went to Topeka High School and was a standout basketball player throughout his time there. As a senior, he was named all-state in basketball. Other sports, such as baseball and football, piqued his curiosity.
He continued his education at the University of Kansas, majoring in mathematics and participating in athletics as a varsity basketball player, varsity baseball player, and freshman football player.

After graduating from Kansas, Smith worked as an assistant coach at the university from 1953 to 1954, and then as the head coach of the baseball and golf teams at the United States Air Force Academy for a few years.
Smith was hired as an assistant coach by North Carolina coach McGuire in 1958. He held that post for three years, and when McGuire was forced to retire, Smith took over as the team’s head coach.

Smith’s only losing season was in 1961-62, his first with the team. His squad began to win routinely over time, and by the 1966 season, they had never finished worse than a tie for third place.

Smith’s first major success came in the late 1960s, when North Carolina won three consecutive regular seasons and the ACC tournament. But it took him seven Final Four appearances to win his first national championship.
Smith reached the pinnacle of his career in 1982, when he won his first national championship. Players like Michael Jordan, James Worthy, and others were on his team. The team won the game at New Orleans versus Houston.

In 1993, Smith won his second national championship with a team that included George Lynch, Eric Montross, Donald Williams, Derrick Phelps, and others. They advanced to the finals by defeating Kansas in the semifinals, and then defeated Michigan to win the championship.

Smith unexpectedly announced his retirement in 1997, shocking everyone.
Smith continued to have an impact on significant choices in North Carolina long after he resigned. In 2003, he was contacted about whether or not Roy Williams should be appointed as the team’s coach.

Smith was the most successful men’s collegiate basketball coach in history, having coached North Carolina for 36 years and amassing a total of 879 victories.

In his 36 years as the coach of the North Carolina basketball team, Smith is credited with 879 victories. He has won two national championships and is the fourth most in men’s NCAA Division I basketball history.

In 1976, he also guided the United States team to a gold medal at the Summer Olympics in Montreal. He is one of just three coaches in history to have led a team to an Olympic gold medal, a National Invitation Tournament championship, and an NCAA championship.

In 1954, Smith married Ann Cleavinger. Sharon, Sandy, and Scott were their three children. The marriage, however, terminated in 1973, and the pair divorced.
Smith married Linnea Weblemoe for the second time in 1976, and the pair had two daughters together, Kirsten and Kelly.

Smith’s life was planned to be chronicled in a biography by John Feinstein, but the project was shelved in 2010 due to Smith’s deteriorating mental health. He had Alzheimer’s disease and was experiencing memory loss.
Dean Smith died on February 7, 2015, at the age of 85, at his Chapel Hill residence.

Dean Smith has a $5 million net worth as a collegiate basketball coach in the United States.

In 2013, President Barack Obama bestowed the Presidential Medal of Freedom on Smith.
In 2007, he was inducted into the FIBA Hall of Fame.
He organized North Carolina basketball sessions in jails around the state and is a vocal opponent of the death sentence.

‘Basketball: Multiple Offense and Defense,’ ‘A Coach’s Life,’ and ‘The Carolina Way: Leadership Lessons from a Life of Coaching,’ are among Smith’s books.