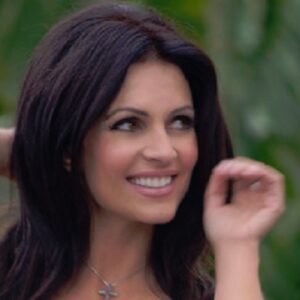 Denise Milani is a tremendously popular pinup model who is among the most searched women on the internet, thanks to her curvy and busty body. In terms of Google hits, she routinely outperformed other internationally famous models like Veronica Varekova, Marisa Miller, Bar Refaeli, and Elle Macpherson at the height of her career. Her excessively curvaceous shape catapulted her to unprecedented success as a pinup model, despite her lovely face, flawless skin, and luxuriant hair. She is certainly one of the most endowed women in the world of fashion, known for her enormous breasts. Despite the fact that it is widely assumed that she has undergone breast augmentation surgery, the lovely lady adamantly denies this and claims that her breasts are naturally this size. She was born and raised in the Czech Republic before moving to the United States to pursue a career as a fashion model, where she quickly rose to prominence thanks to her enviably large and perky breasts. She has millions of men ogling her stunning form, and she is frequently asked to pose naked. However, much to the dismay of her followers, this is something she will not do!

The Career of Denise

Denise Milani dreamed of becoming a famous physiotherapist while still living in the Czech Republic since she had always been interested in health and fitness. She subsequently relocated to California in the United States to follow her dream.

Her busty shape drew attention in the United States, and she began receiving modeling offers. Convinced that she had a shot to make it as a model, the sultry young girl signed up with the sports and glamor website SPORTSbyBROOKS as a model.

She burned the website with her sexy physique and quickly drew millions of followers worldwide, posing in scant swimwear. She also competed in swimsuit competitions and was crowned Miss Bikini World 2007 winner.

From there, she quickly rose to become one of the most well-known pinup models in the world. Along with Gisele Bundchen, Kim Kardashian, Jessica Biel, Megan Fox, Jessica Alba, Carmen Electra, Heidi Klum, Adriana Lima, and Angelina Jolie, she was chosen one of the ten most desirable women in the world in 2013.

Denise Milani is the type of person who avoids conflicts at all costs. However, she became unwittingly involved in a scandal when a band of hackers and criminals used her identity to lure a physics professor into a well-planned drug-smuggling scam.

Denise was able to prove her innocence after the professor was jailed. Despite the fact that no legal action was taken against her, she was rattled by the occurrence because she believed the claim would damage her reputation and lead her supporters to believe she was involved in drug trafficking.

Thankfully, her admirers were understanding, and the scandal had no negative impact on her image.

Denise Milani was born on April 24, 1976, as the eldest of three sisters in a middle-class household in a small town in the Czech Republic. When she was in her early twenties, she traveled to the United States to seek a profession as a physiotherapist, but fate had other ideas for her.

She quickly moved into modeling and was quickly pushed to international prominence. Among the most popular pinup models, she was even more popular than supermodels Lorna Morgan, Bianca Beauchamp, and Miriam Gonzalez at the height of her career.

But she didn’t let her modeling career get in the way of her original goal, and she earned her fitness certification as well. She is a Certified Wellness Coach, NCSF Certified Personal Trainer, and Certified Spinning Instructor, according to her official Facebook page.

She is happily married with a son in her personal life. She hasn’t shared many details about her spouse or child, however.

Denise Milani, a Czech-born beauty model with a net worth of $6 million, is one of the most downloaded girls on the internet.