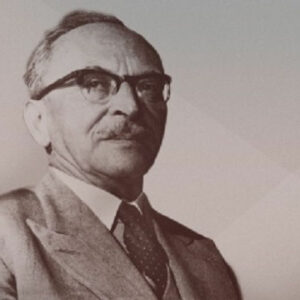 Dennis Gabor was a British electrical engineer and physicist who invented holography. He was born in Hungary. “For his discovery and development of the holographic method,” he was awarded the Nobel Prize in Physics in 1971. He began his career as a research engineer at Siemens & Halske AG in Berlin, but due to his Jewish origin, he was forced to flee Nazi Germany after only a few years. He arrived in England and became a British citizen after joining the Thomson-Houston Company in Rugby. He came up with the idea for holography in 1947 and created the fundamental technology using ordinary filtered-light sources. He joined the Imperial College of Science and Technology’s faculty in 1949 and was promoted to professor of Applied Electron Physics after only a few years. Physical optics, communication theory, high-speed oscilloscopes, and television research were some of his other important accomplishments. He obtained over 100 patents for his work in addition to winning the Nobel Prize. Holography, which became economically viable with the invention of the laser in 1960, is his most well-known contribution. The ‘Father of Holography’ is how he is known.

Dennis Gabor was born in Budapest, Hungary, on June 5, 1900. He was the oldest son of Bernát Günszberg and Adél Jakobovits. The family’s surname was changed from Günszberg to Gábor in 1902.
His family was initially Jewish but converted to Lutheranism in 1918. Meanwhile, he served with the Hungarian artillery in northern Italy during World War I.

He decided to study engineering when the war ended in 1918. Physics, on the other hand, had always been his favorite subject. He began his studies in Electrical Engineering in Budapest and completed them at the Technical

Hochschule Berlin-Charlottenburg. In 1924, he earned a diploma.
In 1927, he was awarded a doctorate in engineering for his thesis on the invention of one of the first high-speed cathode-ray oscillographs.

He became interested in electron optics early in his career and used cathode-beam oscillographs to investigate the physics of high-voltage electric transmission lines. Other electron-beam devices, such as electron microscopes and television tubes, were gradually examined.

He worked on plasma lamps and wrote his doctoral thesis on ‘Recording of Transients in Electric Circuits with the Cathode Ray Oscillograph’ in 1927.

Because of his Jewish ancestry, he was forced to flee Germany in 1933. He arrived in England after a brief visit in Hungary and was offered a job at the Thomson-Houston firm in Rugby, Warwickshire. In 1946, he was granted British citizenship.

Using a typical filtered-light source, he devised holography in 1947. Holography could not be employed commercially until the arrival of the laser in 1960, because conventional light sources usually provided either too little or too dispersed light.

His research into the inputs and outputs of electrons led to the invention of re-holography. Between 1946 and 1951, he wrote a series of papers on the subject.

After a while, he looked into the mechanisms of human communication and produced the granular synthesis theory, which ultimately became the cornerstone of time-frequency analysis.
He joined the Imperial College London faculty in 1948. He was promoted to professor of Applied Electron Physics ten years later and remained there until his retirement in 1967.

In 1963, he released ‘Inventing the Future,’ which discussed the three major threats to modern society that he saw: war, overpopulation, and the Age of Leisure. In 1970, he wrote ‘Innovations: Scientific, Technological, and Social,’ which demonstrated his fascination with technological innovation as a tool for both emancipation and destruction.
He was awarded the Nobel Prize in Physics in 1971 “for his discovery and development of the holographic method.” He described the history of holography development from 1948 in his Nobel address.

He spent a lot of time in Italy after he retired. He remained a Senior Research Fellow at Imperial College London and also worked as a Staff Scientist at CBS Laboratories in Stamford, Connecticut.

In 1972, he published ‘The Mature Society: A View of the Future,’ which reflected his interest in social analysis. He also oversaw a Club of Rome working committee that looked at energy sources and technological progress. The conclusions were reported in the report ‘Beyond the Age of Waste,’ which was released in 1978.

Dennis Gabor was an electrical engineer by trade, but he specialized in applied physics. In 1927, he developed his first successful invention, the high-pressure quartz mercury lamp, which has since been used in millions of street lighting throughout the world.

He explored the idea of holography in 1947 and established the fundamental approach using ordinary filtered-light sources.

Research on high-speed oscilloscopes, communication theory, physical optics, and television was among his other accomplishments. During his lifetime, he obtained over 100 patents.

With the advent of lasers, holography became a practical application, and Gabor gained a worldwide reputation and success. During his lifetime, he received numerous prizes and honors.

He was made a Fellow of the Royal Society in 1956. (FRS). He was elected Honorary Member of the Hungarian Academy of Sciences in 1964 and received a D.Sc. from the University of London in 1965.

In 1967, he received the Young Medal and Prize for outstanding contributions to optical research, as well as the Columbus Award from the International Institute for Communications in Genoa.
The Franklin Institute, Philadelphia, awarded him the first Albert A. Michelson Medal in 1968, followed by the Royal Society’s Rumford Medal in 1969.

In 1970, he earned an Honorary Doctorate from the University of Southampton, the Institute of Electrical and Electronics Engineers Medal of Honour, and the Commander of the Order of the British Empire (CBE).

For his discovery and development of holography, he was awarded the Nobel Prize in Physics in 1971. He was awarded an Honorary Doctorate by the Delft University of Technology in the same year. The Société Française de Physique awarded him the Holweck Prize the following year.

Every year, the Hungarian Academy of Sciences’ NOVOFER Foundation bestows the International Dennis Gabor Award on exceptional young scientists working in the domains of physics and applied technology.
The Gabor Medal is given by the Royal Society of London in recognition of “distinguished interdisciplinary work across the biological sciences and other fields.”

When Dennis Gabor was at Rugby, Warwickshire, he met his future wife, Marjorie Louise Butler. In 1936, the couple tied the knot.
On February 9, 1979, he died in South Kensington, London.

Dennis is one of the wealthiest physicists and one of the most well-known physicists. Dennis Gabor’s net worth is estimated to be $1.5 million, according to Wikipedia, Forbes, and Business Insider.