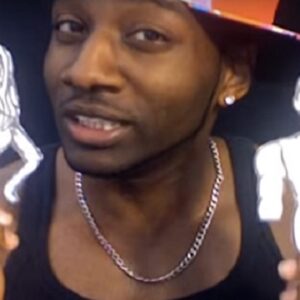 American singer-songwriter DeStorm Power won the “American Music Award” in 2011 for “New Media Honoree (Male)” and the “YouTube Music Awards” in 2013 for “Innovation of the Year.” In 2013 he was a finalist for the Streamy Award for Best Web Musician, and in 2014 he took home the prize for Best Vine Comedian. He has produced videos for household names like Pepsi that have been featured on MTV, VH1, and BET. For his videos, he has worked with musicians like Snoop Lion, Talib Kweli, and Vassy as well as actors like Taye Diggs and Larry King. He offers clothing and other items from “Hot Pockets,” “THQ,” and “Home Depot.” His videos have received millions of views from more than 1.4 million subscribers. He performed as “Mr.T” in “Mr.T vs. Mr. Rogers” in the first season of the YouTube series “Epic Rap Battles of History,” as “Kayne West,” a rapper, in “Donald Trump vs. Ebenezer Scrooge,” in the third season, and as “Shaka Zulu” in “Shaka Zulu vs. Julius Caesar,” a historical figure, in the fourth season.

Early in his youth, DeStorm Power gained a high degree of proficiency in musical theater production, songwriting, and singing. He wanted to display his abilities to others, and he decided that Vine and YouTube were the greatest platforms for doing so. He initially shared his videos with as many people as he could after getting over his shyness to talk about his achievements with total strangers. One of DeStorm’s primary strategies was to collaborate with others to produce videos that were showcased on each other’s channels, which each had up to 10,000 viewers. He then worked with individuals who had 20,000 views. He continued working with others who had a huge following in this way to collaborate and grow the audience for his own channel. With more people watching and more movies being published on his own account, his reputation rose. On his “DeStorm” channel, he has more than 250 videos that have received more than 250 million views. More than 1.8 million people subscribe to the channel. He established the “Multi Channel Network Forefront.TV,” which features music and urban culture. His net worth is reportedly $2.5 million. On Vine, he has more than 6 million followers. In May 2012, he released his mixtape, “Be Careful.”

Why DeStorm Is So Unique?

Other YouTubers lack the reputation that DeStorm Power has as a motivational speaker and a physical fitness coach. DeStormTV, his second YouTube account, is where he primarily posts articles, motivational speeches, and behind-the-scenes videos. More than 1,450,000 subscribers can get fitness advice from him thanks to this channel and his background as a track and field athlete and personal trainer. He is very popular on YouTube because of his many skills as a singer, songwriter, physical trainer, musician, comedian, and many other things all rolled into one.

Past Fame of DeStorm Power

It is rumored that DeStorm married his longtime partner, Tayvion, with whom he has a son. He hasn’t yet shared the name of his wife, though. He posted a video labeled “this is my wife” in which Liane V appears, leading to speculation that she is his wife. The caption, however, was only used to draw attention to the video’s humorous aspects; his wife’s identity remains a mystery. It is unknown if he has already wed his partner. Additionally, it’s unclear if they were married or divorced. Despite having a significant online presence, this family has managed to keep all of its members’ private information and business affairs hidden.

DeStorm Power was raised by his mother in Baltimore, Maryland, along with his seven siblings. DeStorm struggled as a child because his father and mother had split up, and the family’s financial situation was dire. Instead of attending school, he learned music for most of his formative years. He first worked as a ghostwriter for recording labels like Universal, Atlantic Records, and others. He began writing songs and performing with these organizations for a while before deciding to become a successful producer, singer, and songwriter. To connect with millions of viewers, he used YouTube as the platform. He is also a well-known triple jumper and a track and field athlete who has once been invited to the Olympic Trials. He is also an expert at teaching different people how to exercise.

DeStorm Power’s net worth is $2.5 million. DeStorm Power is an American musician, comedian, and YouTube personality. DeStorm, also known as DeStorm Power, was born in Brooklyn, New York, and grew up in Baltimore, Maryland. He started writing and producing songs for his own DeStorm YouTube channel after working as an intern and ghostwriter at Universal/Atlantic Records. He is currently the 8th most subscribed musician on YouTube, and the channel quickly rose to prominence. Over 150 million people have viewed his videos. He’s made commercials for brands including GE, Yahoo, Nintendo, and Pepsi, and his videos are renowned for their humor and musicianship. Additionally, he has collaborated with well-known YouTube musicians like Kina Grannis and MysteryGuitarMan. He also has a second channel where he shares health advice and shows “making of” and other behind-the-scenes material for his several award-winning music videos. He is a musician as well as a personal trainer and former Olympic triple jumper.

He performs in a battle as the first African-American guest ever!