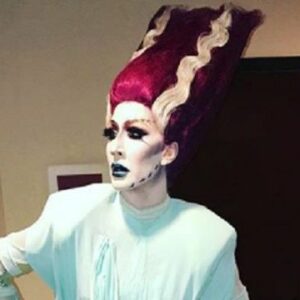 American drag performer and musician Detox Icunt, real name Matthew Sanderson, was born. He gained the most notoriety after participating in the fifth season of “RuPaul’s Drag Race,” a reality show that seeks to discover “America’s next drag superstar.” Additionally, he participated in the second season of “RuPaul’s Drag Race All Stars,” where he finished second. Icunt also performs in the female impersonation performance “Dreamgirls Revue” by Chad Michaels. He has recorded several singles over his career as a member of the rock group Tranzkuntinental, including “Boy is a Bottom,” “Silicon,” and “Blurred Bynes.” The American drag artist has also made numerous video appearances to date. He has collaborated with legendary artists like Lady Gaga, Jackie Beat, Kesha, Rihanna, and Jeffree Star. Icunt is active on Twitter, Instagram, and Facebook. She has appeared in the live rendition of the movie “Showgirls” called “Showgirls in Drag.”

Detox Icunt made an appearance in Rihanna’s song “Disturbia” in 2008. He appeared in the Kesha songs “Take It Off” and “Sleazy Remix 2.0: Get Sleazier” two years later. Then, in 2011, he appeared in “Showgirls in Drag,” a live adaptation of the movie “Showgirls.”

The American performer appeared in a “Neil’s Puppet Dreams” web episode the next year. The following year, Icunt appeared in the fifth season of “RuPaul’s Drag Race” and was eliminated in the 11th episode. He was also featured in Willam Belli’s song “Chow Down.”

He with a few other artists released the songs “Boy Is a Bottom,” “Can I Get an Amen,” “Silicone,” and “Blurred Bynes” in 2013. Icunt was also a featured artist on Lady Gaga’s song “Applause” that year (lyric video).

He then participated in the reality show “Skin Wars” featuring body painting and presented the web series “Oh, Pit Crew” in 2015. The American drag artist competed in the second season of “RuPaul’s Drag Race All Stars” and finished second. The following year, he released the non-album single “Supersonic.” Icunt then started appearing on “Gay for Play Game Show Starring RuPaul.”

On June 3, 1985, in Orlando, Florida, USA, Detox Icunt was born as Matthew Sanderson to Patty and Tom Sanderson. He has a sister named Heather and a twin brother named Michael. Icunt attended Manatee High School before earning his high school diploma from South View in 2003.

He was involved in an automobile accident in 2009, and his forehead required reconstructive surgery. The American drag artist is active on social networking sites like Twitter, Instagram, and Facebook because he loves to stay in touch with his followers. He occasionally loves to update his profiles.

One of the wealthiest and most well-known reality stars is Detox Icunt. Detox Icunt’s net worth is roughly $1.5 million, according to our analysis of data from sources like Wikipedia, Forbes, and Business Insider.