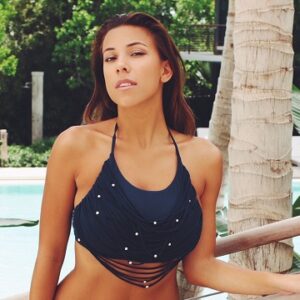 Devin Brugman is a fashion model, entrepreneur, and blogger. Devin began her career as a bikini model and went on to co-found ‘A Bikini A Day,’ ‘Monday Swimwear,’ and her most recent business, ‘Monday Active,’ with her closest friend Natasha Oakley. Devin’s experiment quickly turned into a steady stream of revenue.

She had entrepreneurial blood in her DNA because both of her parents co-own a business. Using her natural beauty to her advantage, she quickly established a following of 1.3 million followers on ‘Instagram’ and brought them to her blog, which currently has a fan viewership of over 4 million. She and her business partner quickly built one of the largest online bikini marketing platforms, and she has ambitions to expand her brand in the future with seasonal collections and more activewear.

She moved to Los Angeles after graduating from high school in pursuit of a better future. Before she and her friend, Natasha, decided to embark on an exotic vacation and simply load their suitcases with bikinis, she took on little modeling consignments and even provided support as a photographer.

They often posted amusing photographs of themselves in bikinis to ‘Instagram,’ and had numerous requests for more.

They became known as the ‘bikini girls’ in 2012 and decided to start a blog in which one of them would wear a bikini every day and express what they liked about it to the users.

Bikini firms began flooding them with items overnight, to the point that they were receiving over a hundred bikinis every day. Their interest grew into a full-fledged business, and they collaborated to create their own bikini brand, dubbed ‘Monday Swimwear.’

Their business exploded, leading them to come up with new ideas to capitalize on their growing popularity, and as a result, they created the ‘Monday Active’ line of gym and activewear clothing.

She is seductive and has lovely features. This American lassie from Hawaii has everything it takes to make it in the fashion industry. What appeals to you the most? She’s a brainy beauty! She and her buddy Natasha Oakley started their own business at the age of 21.

She juggled her studies for an MBA while also working extensively at her business during her college years. In fact, she aspires to be a role model for millions of young women by serving as an example of a powerful woman.

She frequents the gym in order to preserve her amazing body, and she enjoys being fashionable and setting new trends. She is a die-hard bikini and beach fanatic who would spend a whole day there if she could.

She enjoys cooking as well, and her favorite dish is spaghetti. James Franco, who is absolutely stunning, is her celebrity crush. She enjoys writing and blogging, so it’s more of a pastime for her than a business.

She was born in Oakland, California, on December 26, 1990, to American parents. She relocated to Hawaii when she was four years old and attended high school there.

With the help of her parents, she relocated to Los Angeles after graduating from high school to pursue additional education and a more promising profession.

Because her mother was a former model, they encouraged her to pursue business education at Mount St. Mary’s College, which she did with the help of her father, an MBA graduate.

Around the same time, her blog turned into a business, and she juggled employment and schooling, eventually launching new business projects with her business partner after earning a degree.

She revealed in an interview that she endured a bad breakup during her college years and that she has always known that her girlfriends will always have her back.

She is currently unmarried, however, she has stated that she prefers men who are macho and ask fewer questions. Many lads would undoubtedly be happy to learn that!

Brugman’s estimated net worth is over $300,000 thanks to her modeling career as well as her roles as a businesswoman and blogger.