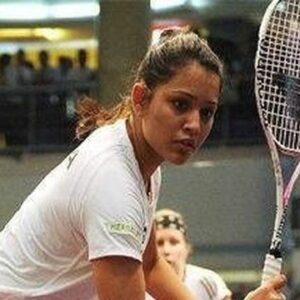 The first Indian squash player to reach the top 10 in the PSA Women’s rankings is Dipika Pallikal Karthik. She accomplished this in 2012. She had won the Crocodile Challenge Cup, the Dread Sports Series 2 event, and the Orange County Open the year before, all WISPA championships. Additionally, she advanced to the World Open quarterfinals, which made her a household name. She achieved her career-best ranking of 10 in December 2012 thanks to these outcomes. She received the “Arjuna Award” from the government that year. Another significant year for her career was 2014 when she and Joshna Chinappa won the women’s doubles gold medal at the Commonwealth Games. This was followed by the women’s singles bronze medal at the Asian Games. In 2014, she was given the Padma Shri, India’s fourth-highest civilian honor. She competed for the Indian Women’s teams that won the silver medal at the Asian Team Championship and the South Asian Games in 2016, respectively.

On September 21, 1991, Dipika Rebecca Pallikal was born into a Malayali household in Chennai, India. Sanjiv and Susan Pallikal, her parents, are Syrian Christians who were born and raised in the Indian state of Kerala. Her father is an independent contractor for Reach Management Consultancy. Her mother captained the Indian women’s cricket team and participated in international competitions. It’s interesting to note that Dipika chose squash over cricket, a sport she never really enjoyed because it predominated over most other sports in India. Her sisters are Divya and Dia. She attended Lady Andal and Good Shepherd Schools before earning her English degree from Chennai’s Ethiraj College in the academic year 2012–2013.

When Dipika Pallikal Karthik was in the sixth grade, she participated in her first international competition in London. She subsequently won a number of matches on the European Junior Squash Circuit. She joined the India Cements Squash Academy in 2002, and at age 11, she went on to win the national championship. She started playing professionally in 2006, although her early performances were patchy. She did, however, spend a brief period of time training in Egypt at the beginning of 2011, which significantly improved her capacity to produce successful performances. She had begun 2011 in position 29, and she gained attention in December by capturing three significant WISPA tour titles and rising to a rating of 17, making her the highest-ranked Indian woman squash player ever, surpassing previous national champion Misha Grewal’s 27th position in 1995. She placed eighth at the World Open, moving her up to fourteenth place in February 2012.

She became the first Indian athlete to enter the top 10 in December 2012. She also helped the Indian squash team place fifth at the 2012 Women’s World Team Squash Championships by being the first Indian to reach the summit clash of a Silver event and the semi-finals of a Gold event. She attributes her achievement to her coaches, Major (rtd) S. Maniam and Cyrus Poncha.

National championships to be boycotted

2008’s Chennai Marathon was the first time Indian wicket-keeper batsman Dinesh Karthik and Dipika Pallikal have ever interacted. In 2012, Karthik and Nikita Vanjara, with whom he was married at the time, divorced. As they were working out at Mr. Shankar Basu’s Maverick gym in Chennai in 2013, the trainer formally introduced Dipika and Dinesh to one another. After he paid her a surprise visit in England, where she was training, things this time soon heated up. The two exchanged vows in November 2013 during two private ceremonies—one Christian and the other Hindu—both hosted at Chennai’s ITC Grand Chola. Due to the fact that Dipika is a Christian and Dinesh’s family is Hindu, the pair again had two separate ceremonies when they got married two years later in August 2015.

Dipika is among the wealthiest and most well-known squash players. Our analysis of data from sources like Wikipedia, Forbes, and Business Insider indicates that Dipika Pallikal’s net worth is roughly $1.5 million.