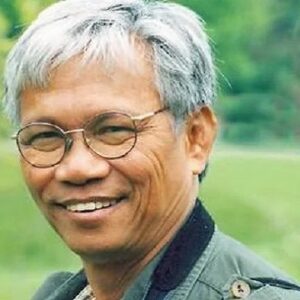 Dith Pran was a Cambodian photojournalist and a survivor of the Cambodian Genocide who became a champion for justice in Cambodia. As a member of a middle-class family, he had the opportunity to attend school, unlike the majority of Cambodians. After mastering French and English, he began working as a military interpreter for the United States. In the early 1970s, in the midst of a war crisis, he met Sydney Schanberg, a journalist with whom he formed a lifetime friendship. Together, they witnessed the atrocities of the Cambodian government’s struggle with the Khmer Rouge communist regime. When the Khmer Rouge came to power, however, these atrocities were dwarfed by subsequent atrocities of an even greater magnitude. The majority of international reporters were let to leave the country, but the new regime’s military prevented him from leaving. He was abducted as a prisoner, tortured, and forced to work as a farm laborer for four years while starved. Later, he gained his release, but upon returning home, he discovered that the majority of his family had perished in the Khmer “killing fields.” Concerned about his safety, he fled to a Thai refugee camp and contacted Schanberg, who assisted him in migrating to the United States. The remainder of his life was spent as a photojournalist promoting justice for his fellow Cambodians. His life was depicted in the Academy Award-winning film The Killing Fields (1984).

Dith Pran was born in Siem Reap, Cambodia, on September 27, 1942. His father, Dith Proeung, oversaw the construction of roads as a public works official. Dith Pran had three brothers and two sisters.

Although the majority of his country was impoverished, he grew up in a middle-class household that could afford his schooling. He grew up amid the ruins of the huge complex of temples known as Angkor Wat in Cambodia.

He attended local schools and learned French there. He also learned English on his own and graduated from high school in 1960.

Five years into his employment, Dith Pran served as an interpreter for the United States Army. But after the Cambodian government cut connections with the United States, he was no longer employed as a translator.
After that, he worked briefly as a translator for a British film crew and then as a hotel receptionist close to Angkor Wat.

Eventually, he relocated his family to Phnom Penh and began working as a journalist. In 1972, he met Sydney Schanberg, a journalist for The New York Times who had become interested in the Cambodian conflict. Eventually, the two became close friends, and by 1973, he was exclusively collaborating with Schanberg.

The Khmer Rouge grew as a seasoned and fanatical fighting force as the battle continued. Thousands of Cambodians, believing that a Khmer Rouge victory was imminent, hurried to find any means of escape.

In 1975, he remained in Cambodia with Schanberg to cover the fall of Phnom Penh to the Khmer Rouge. Later, Schanberg and other foreign journalists were let to leave the country, whereas Dith Pran was jailed.
Because he feared harassment from Khmer Rouge officials, he concealed the fact that he was educated and knew Americans. Instead, he disguised himself as a taxi driver by dressing as a farmer.

As a result, he and many others were put to work in labor camps, where he was starved and tortured for four years. In labor camps, the days consisted of rigorous labor, while the evenings were filled with political indoctrination.

This dreadful scenario endured until December 1978, when the Vietnamese invaded Cambodia and ousted the Khmer Rouge. Upon his return to Siem Reap, he discovered that 50 members of his family had been murdered.

The Vietnamese made him the village leader, but he escaped to Thailand out of concern that they would discover his international contacts and execute him. There, he entered a refugee camp and contacted Schanberg, who subsequently facilitated his relocation to the United States.
He worked as a photojournalist for the New York Times beginning in 1980 and earned an American citizen in 1986.

His entire later life was devoted to initiatives for his fellow Cambodians who had suffered under the Khmer Rouge. He formed and became president of the “Dith Pran Holocaust Awareness Project,” a group that campaigns for the acknowledgment of Cambodian genocide victims.

In 1998, he earned the “Ellis Island Medal of Honor” and later the “International Center Award of Excellence.”

Dith Pran was previously married to Ser Moeun Dith, with whom he had four children, but they divorced later. Later, he married Kim DePaul, but they divorced as well.
On March 30, 2008, at the age of 65, he passed away in New Brunswick, New Jersey, from pancreatic cancer.

Dith is one of the wealthiest and most popular photographers in the world. According to our research, Wikipedia, Forbes, and Business Insider, Dith Pran has an estimated net worth of $1.5 million.

Based on his life and experiences in Cambodia, the 1984 Oscar-winning film The Killing Fields was created.