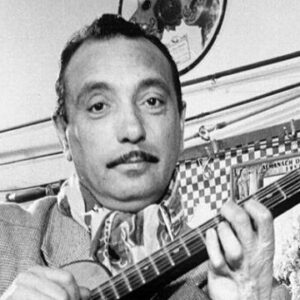 Romani French jazz guitarist and composer Jean Reinhardt, well known by his stage name Django Reinhardt, was born in Belgium. He was among the best musicians of the 20th century and one of the most important jazz figures to come out of Europe. Reinhardt, a musician’s son, began touring the US with Duke Ellington’s group at a young age. He finally became a legendary figure in music history thanks to the development of his own distinctive and innovative musical method. He was primarily self-taught, yet he was born with musical talent. Many of his pieces, including “Minor Swing,” “Belleville,” “Swing 42,” and “Nuages,” are remembered. Frank Vignola, a jazz guitarist, claims that practically all of the world’s top guitarists have been influenced by Django Reinhardt. Every year, Django festivals are organized around the US and Europe as a result of the enormous popularity he amassed throughout the course of his career. Recently, the French movie “Django,” which is based on his life, was also released. It had its world premiere in 2017 at the Berlin International Film Festival.

On January 23, 1910, Jean “Django” Reinhardt was born in Liberchies, Pont-a-Celles, Belgium. His mother was Laurence Reinhardt, and his father was Jean Eugene Weiss. The name “Django” has a complicated history. While some think that just represents a different spelling of “Jean,” others assert that it actually means “I awake” in Romani.

He was raised close to Paris and began playing the guitar, banjo, and violin at a young age. He never attended a formal school. Early in his adolescence, he began performing in clubs all throughout Paris.

In 1928, Django Reinhardt made his first recording. He became very well-known thanks to his music, and the young man even received international attention. According to rumors, British bandleader Jack Hylton only traveled to France to see him perform. Hylton was so impressed that he immediately made Reinhardt an invitation to join his band, which the latter readily accepted.

Reinhardt had to deal with a horrific accident before he could begin performing with the band. When the caravan he and his wife were traveling in unintentionally caught fire, he almost perished. He and his wife both had severe burns, but they lived. Due to the severe burns on two of his fingers, he believed he would never be able to play the guitar again.

He learned to play the instruments by utilizing only his thumb and the other two fingers over the course of the following few years via pure willpower. He also developed a special playing style as a result of this, enabling him to use just his remaining fingers.

He began collaborating with violinist Stéphane Grappelli in the middle of the 1930s, and the two of them eventually established the Quintet of the Hot Club. The ensemble, which rose to prominence as the first significant European band, became well-known for its interpretations of American tunes like “Dinah” and “Lady Be Good.” Along with many other American jazz performers, he also recorded with Benny Carter, Adelaide Hall, and Coleman Hawkins.

When World War II began, Reinhardt was on tour in England. He so went back to France. The Nazis had already taken over France at this point in Europe’s political history, which was volatile politically. Reinhardt felt the need to leave France because the Nazis opposed jazz music.

He was once captured, but a German commander who loved jazz assisted in his escape. However, the Swiss border patrol officers once more halted him. The Nazis had little need for jazz, so he was deported back to Paris, where he sought to create new genres of music.

He traveled about the US for a while after the war was over. He once attracted sizable audiences to his appearances. He eventually had to go back to France since, despite being promised jobs in California, he never received any of them.

His later years were challenging. As he got more erratic and moody, his music degraded. Despite everything, he kept writing songs whenever he could. He made a couple of records in 1953 with the renowned jazz guitarist Dizzie Gillespie. He suffered a severe stroke, which caused his abrupt death on May 16, 1953.

When he was seventeen years old, Django Reinhardt got married for the first time to Florine Mayer. They only had a son. But soon after the mishap, they split up.

Later, he wed Sophie Ziegler, and they were together from 1943 until his death in 1953. One son was also born from this union. Both of his kids, Lousson and Babik, continued on with his musical legacy by pursuing careers as jazz guitarists.

On May 16, 1953, Reinhardt suffered an immediate stroke. Just 43 years old, he was.
He continues to be regarded as one of the most well-known jazz musicians to have ever lived, even today. Many musicians, including BB King and Carlos Santana, have been impacted by his work. He is recognized for having had a significant impact on American jazz music.

An honor that bears Reinhardt’s name is called the Prix Django Reinhardt. The year’s top French jazz musician receives it.

A documentary called “Djangomania” was released in 2005. Jamie Kastner did the writing and directing for it. The movie demonstrated the impact of Reinhardt’s music throughout the world.

In 2017, the French movie “Django” was released. It was based on the life of Django Reinhardt. Mixed reviews were given to its premiere at the Berlin International Film Festival.

The estimated net worth of Django Reinhardt is unknown.

Despite having just two usable fingers on his left hand, he rose to become one of the most renowned and significant jazz musicians in the world.