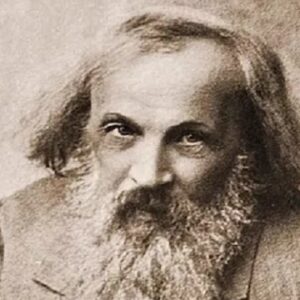 Dmitri Mendeleev was a Russian scientist who made a significant contribution to science by discovering the periodic law and grouping the elements into the periodic table. His early years were marred by adversity and sorrow. He had lost his father and was suffering from tuberculosis by the time he was 21. He became a science professor after burying himself in his scientific studies. He understood as a teacher that his students need a full and complete textbook. To address this, he set out to write a textbook that would help Russian students learn more effectively. Over the course of his life, he published over 400 articles and books, drawing on his excellent academic background, international scientific research, and new views. Mendeleev was passionate about developing and improving Russia’s agricultural and industrial resources, despite being best recognized for the periodic table. He worked as a government counselor and wrote various coal-industry development initiatives. He toured the Russian empire and even flew to the United States to study petroleum. He retired from teaching near the end of his life and devoted himself to metrology. He produced his own metrology magazine in a few of years. His contributions to different fields are eclipsed by his monumental scientific achievement, the periodic table of elements.

On February 8, 1834, Dmitri Mendeleev was born in Verkhnie, Aremzyani, a tiny Russian province. His precise number of brothers and sisters is unknown, however it is estimated that he had at least 16 of them. When his father, Ivan Mendeleyev, began to have health problems, his boyhood was defined by sadness. At 1847, he died, leaving

Dmitri’s mother to support the family by working in a glass factory. In 1848, tragedy struck again when his mother’s glass factory burned down. The family had no choice but to relocate to St. Petersburg. Mendeleev was afflicted with tuberculosis in 1855, yet he finished his schooling in order to become a teacher. He received his education at St. Petersburg’s Main Pedagogical Institute.

Mendeleev began teaching science in Crimea in 1855. He quickly made the decision to return to St. Petersburg and continue his school. He earned his Master’s degree in Chemistry a year later. He was appointed to the University of St. Petersburg as a professor. He saw that a well-organized and high-quality chemistry textbook was desperately needed, so he proceeded to research and write his own. He published ‘Organic Chemistry,’ a 500-page textbook, in 1861. The book went on to win the Domidov Prize, propelling Mendeleev to scientific prominence.
He was appointed Chair of General Chemistry at the University of Saint Petersburg in 1867. He utilized his position to pressure Russia to develop and concentrate on their chemistry knowledge.

Mendeleev published his second major book, ‘The Principles of Chemistry,’ in 1869. The book was so well-received that it was translated into three languages: French, German, and English.
His primary paper, ‘The Relation between the Properties and Atomic Weights of Elements,’ was published in 1869. He created the periodic chart to organize the 65 known elements.

Mendeleev had perfected his periodic table of elements by the year 1889. In London, he presented his representation, and this model is still in use today. He stepped down from his academic position in 1890. He began working as a government consultant the following year. He was passionate about boosting Russia’s industrial and agricultural potential.
Petroleum was a subject that piqued his curiosity. His study aided in the establishment of Russia’s first oil refinery.

In 1893, he was appointed director of Russia’s Central Board of Weights and Measures. He evaluated multiple reprints of his “Principles of Chemistry” and contributed several articles in the “Brockhaus Encyclopedia.”

In 1869, Mendeleev published the periodic table. His revolutionary element organization accurately believed that some of the elements’ atomic weights had been measured wrongly, and that eight additional elements existed. His scientific reputation grew even stronger as new elements were discovered and his hypotheses were confirmed to be right.

In 1905, he was awarded the Copley Medal. This highest distinction was bestowed upon him by the British Royal Society for his outstanding scientific discovery, the periodic table.

On April 27, 1862, Mendeleev married Feozna Nikitchna Lascheva. The pair married for over 20 years before divorcing in 1882. From this marriage, he produced two children: a son named Vladimir and a daughter named Olga.
Mendeleev married Anna Ivanova Popova in 1882, and they had four children.
On February 2, 1907, he passed away. Many people brought replicas of the Periodic Table at his funeral in St. Petersburg as a tribute to his contributions to science.
In 1955, the number 101 was discovered. To honor his achievements to science, it was given the name Mendelevium.

Mendeleev contracted TB in 1855. Doctors said he only had two years to live, but he lived for another 52 years.
In only 61 days, he completed his textbook, ‘Organic Chemistry.’ The book, which is 500 pages long, won the Domidov Prize.

Mendeleev’s scientific findings are detailed in nearly all of his biographies. However, the truth is that he spent more time and thought about questions about the national economy than chemistry.
The 40 percent standard strength of vodka was set by Mendeleev, according to a popular Russian legend. The truth is that when he was nine years old, the government already had these criteria in place.