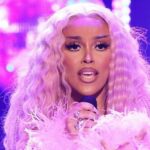 Doja Cat, sometimes known as Amala, is a singer, composer, and record producer from the United States. She is well-known for her captivating music, which incorporates elements of electronic R&B and hip hop. She’d always wanted to be a musician, and at the age of 18, she issued her first EP, ‘Purrr!’ She went on to record a number of singles, including ‘No Police,’ ‘Mooo!,’ and ‘Roll with Us,’ inspired by the good feedback she received. Doja Cat’s stage name was inspired by the word “dojo,” which means “weed,” as well as her love of cats. The singer-songwriter comes from a family of artists and is quite skilled. Her father is a well-known actor and film producer, while her mother is a painter. Doja is now one of the most well-known rising artists in the United States. She is well on her way to establishing a name for herself in the extremely competitive music business, thanks to her excellent voice and musical abilities. The singer, who draws inspiration from Pharrell, Drake, PartyNextDoor, and Erykah Badu, is a role model for many young people in the industry.

Doja Cat’s first song, ‘So High,’ was released in 2013. She rose to notoriety the following year after signing with RCA Records and releasing her debut EP, ‘Purrr!’ She followed up with the single ‘No Police.’ She began releasing her music on YouTube and Soundcloud after that. Doja began working with other artists such as Hellboy, Elliphant, Pregnant Boy, and Skoolie Escobar.
She was featured on L8LOOMER’s tune “Right Side” on July 13, 2017. The singer released her single “Roll with Us” on February 1, 2018. The following month, she released the music video for ‘Go to Town,’ the second tune off her upcoming album. Doja’s full-length first album, ‘Amala,’ was released on March 30, 2018.
She published the song ‘Mooo!’ on her YouTube account on August 10, 2018. The song rapidly became a hit. Its music video drew the attention of a number of celebrities, including Chris Brown and Chance the Rapper. To far, the video has received millions of views. Doja Cat released a single version of the viral video “Mooo!” on August 31, 2018. On social media, the singer has a sizable fan base. She has over 800,000 Instagram followers and nearly half a million YouTube subscribers.

Amalaratna Zandile Dlamini, better known as Doja Cat, was born on October 21, 1995, in Los Angeles, California, to Dumisani Dlamini and Deborah Elizabeth Sawyer. Her mother is a painter, while her father is a well-known South African actor, film producer, and composer. Doja Cat, a devout follower of Judaism, is influenced by Indian and Japanese culture as well. She is a huge surfer. Dojacat.com is the name of her personal website. There is no information about her romantic life.

Doja Cat has a net worth of $8 million.