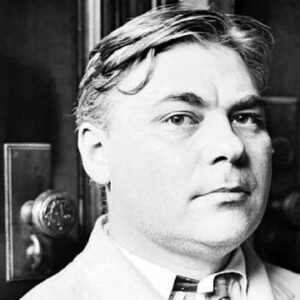 Don Marquis was a famous columnist for newspapers, journalist, and novelist in the United States. “Cruise of the Jasper B,” “Pandora Lifts the Lid,” and other books are by him. As a funny person, he used well-known characters like Archy the cockroach and Mehitabel the Alley Cat to say what he thought about different things in a funny way. He made up the character of Old Soak for his “Sun Dial” column in the newspaper “The Evening Sun” to make fun of the amendment to the U.S. Constitution that banned the sale and use of alcoholic products. This column became popular because it had the right mix of quips, commentary, and funny verse. In this column, he made fun of several people from that time. Old Soak became so well-known that a Broadway play was made about him. Also, this made-up character was the basis for a silent movie, a “talkie,” and a radio drama. He was a finalist for the O. Henry Memorial Prize three times because of how well his short stories were written. He wrote 35 books and also helped write the scripts for the movies “The Spots Pages,” “Shinbone Alley,” “The Good Old Soak,” and “Skippy.” One of his books inspired the plot of the movie “The Cruise of the Jasper B.”

Don Marquis was born and raised in the U.S. city of Walnut.
In the year 1892, his brother David died at the age of twenty.

He went to Walnut High School and graduated from there in 1894. After that, in 1896, he went to Knox Academy, but he left after only three months.

He began working as a journalist by setting type and writing columns for small-town weeklies. He worked as a reporter in Washington, D.C., and Philadelphia for a short time.

He was on the editorial board of the Atlanta Journal from 1902 to 1907 and wrote a number of editorials.
In 1907, he went to work for Joel Chandler Harris as the New Uncle Remu’s Magazine’s associate editor. His work in this magazine got his attention all over the country.

He moved to New York in 1909 and worked for several newspapers there. In 1912, he worked for the New York newspaper “The Evening Sun.” He was in charge of a daily column called “The Sun Dial” for the next eleven years.

After he left “The Evening Sun,” he went to work for “New York Tribune,” which later became “New York Herald Tribune.” His daily column “The Tower” in this paper brought him attention. The name of the column was changed to “The Lantern” after a few months.

At first, he liked working at the “Herald Tribune,” but as time went on, he started to feel tired. He left the paper because he couldn’t handle the stress of work.
He wrote a weekly column for Collier’s magazine for several years after he left “Herald Tribune.” This magazine often ran his short stories and pieces with his opinions.

He used to write regular columns and short stories for the Saturday Evening Post, Harper’s, Scribner’s, Golden Book, and Cosmopolitan, among others.
After being a successful columnist for newspapers and magazines, he went on to write plays. The first play he wrote was called “The Old Soak,” and it did well on the stage.

He also tried writing screenplays for movies. He wrote the scripts for several movies, including “Skippy,” which was a hit in 1932. The Old Soak and The Cruise of the Jasper B, two of his best-selling books, were turned into movies.
When he got back to New York, he spent most of his time at a private club called Players. After he went into self-imposed exile for a while, he put out several volumes of his writing.

During this time, he published “Archy Does His Part,” the third and last book in the Archy and Mehitabel series, in 1935. Before he died, he was writing a book called “Sons of the Puritans,” which was based on his life. He told his friend “Kit” Morley to finish this job.

In 1916, he made up the character Archy, a cockroach who he said had been a free-verse poet in a past life. People say that Archy used to jump on the keys of his typewriter to write poems.

Along with Archy, he also made up a cat named Mehitabel who became Archy’s best friend. Pete the Pup, Clarence the ghost, Warty Biggins, and a toad with a big head were the other characters he showed.

In 1909, he got married to Reina Melcher, who was a freelance writer and author. Robert was their son, and Barbara was their daughter. Reina died on December 2, 1923.

In 1926, he married actress, Marjorie Potts Vonnegut. On October 2, 1936, she died while she was sleeping.
He died after having three strokes that left him with some body damage.

On August 23, 1943, the USS Don Marquis, a Liberty ship, was named after him to honor his memory.

Don is one of the wealthiest poets and is on the list of the most famous poets. Based on what we found on Wikipedia, Forbes, and Business Insider, Don Marquis has a net worth of about $6 million.

Even though this famous humorist and playwright tried writing scripts for Hollywood movies, he didn’t want to keep doing it in his later years. Before he left Hollywood, he wrote a poem about how badly the movie business treats writers.