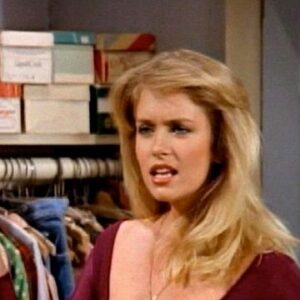 Former beauty queen and retired American actress Donna Lynn Dixon. She worked as a model to launch her career. She attended college and also performed modeling. She competed in the Miss USA Beauty Pageant in 1976 on behalf of the State of Virginia, and the Miss World pageant on behalf of the District of Columbia in 1977. She was cast in her debut part on the television program “Bosom Buddies” in 1980. (1980). She appeared in a number of additional films later on, such as “Doctor Detroit” (1983), “Twilight Zone: The Movie” (1983), “Spies Like Us” (1985), and many others. While Dixon was filming the 1983 movie “Doctor Detroit,” she met her future husband. She then married him and frequently starred alongside him in subsequent motion pictures.

The prominent Wilhelmina Modeling Agency in New York is where Donna Dixon began her modeling career. She was named Miss Virginia USA in 1976 and Miss Washington D.C. World in 1977.

She made her acting debut in the situation comedy “Bosom Buddies” in the 1980s, sharing the screen with Tom Hanks. The television program had just two seasons and debuted on November 27, 1980. In the 1983 American comedy movie “Doctor Detroit,” Dixon co-starred alongside Dan Aykroyd, who would later become her husband.

Dixon made an appearance in the 1983 American anthology science-fiction fantasy horror film “The Twilight Zone” after acting in two comedies. Steven Spielberg directed the film, which was adapted from the same-titled book. The movie was a financial success as it made $ 29.5 million against a $ 10 million budget.

She co-starred with her spouse in the 1989 film “Speed Zone” The film was a comedy centered on an unauthorized cross-country race. Dixon portrayed Tiffany, a dim-witted actress in the mold of Marilyn Monroe. She played one of the main character’s fantasy women in the comedy “Wayne’s World” in 1992.

She appeared in the comedy-thriller movie “Exit to Eden” in 1994, alongside her husband Dan Aykroyd. Last but not least, in 1995, she appeared in the popular TV show “The Nanny.” Her husband appeared as a guest star on the program as well. It was a very popular program that received numerous Emmy nominations.
She made the decision to stop acting in 1997.

Donna Dixon was born in Alexandria, Virginia, on July 20, 1957. Earl Dixon, her father, was the proprietor of a bar named “Hillbilly Heaven.”

She graduated from Groveton High School in 1975 and enrolled at George Washington University. She quit school to become a model, therefore she never really earned the degree. In college, she had taken anthropology classes.

She wed her ‘Doctor Detroit co-star Dan Aykroyd in 1983, and the couple went on to have three daughters: Danielle Aykroyd, Belle Aykroyd, and Stella Aykroyd.

American actress Donna Dixon has a $5 million net worth. In July 1957, Donna Dixon was born in Alexandria, Virginia. Dixon was a model who won the titles of Miss Virginia USA and Miss Washington DC World in 1976 and 1977, respectively. She played Sonny Lumet in the television series Bosom Buddies from 1980 to 1982.