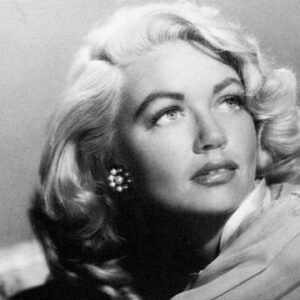 The American actress Dorothy Malone, real name Dorothy Eloise Maloney, is best remembered for her work in the movie “Written on the Wind.” She began her career in 1943 and initially only had little parts, mostly in B movies. Her first studio, RKO, signed her, and she went on to feature in the films “Higher and Higher,” “Seven Days Ashore,” “Show Business,” “Step Lively,” and “Youth Runs Wild.” Following her signing with Warner Bros., she changed her last name from Maloney to Malone. She then went on to appear in the movies “To the Victor,” “The Big Sleep,” “Janie Gets Married,” and “Night and Day.” After ten years in the industry, Malone developed a more glitzy persona, notably following her Academy Award-winning performance in the drama “Written on the Wind.” By the early 1960s, the actress’s film career had reached new heights, and she had even managed to become well-known for her work on television, as Constance MacKenzie in the Peyton Place series. American beauty was also well-known for making cameos in a number of TV shows. The Bold Ones: The New Doctors, Ironside, Ellery Queen, Four Star Playhouse, Fireside Theater, The Loretta Young Show, The Untouchables, Cimarron City, Dr. Kildare, and The Dick Powell Show are just a few of the television programs in which she appeared as a guest star. Throughout her acting career, Malone appeared in many television movies, including the well-known “Katie: Portrait of a Centrefold,” “Murder in Peyton Place,” “Peyton Place: The Next Generation,” and “The Pigeon.”

One of the five children of Esther Emma “Eloise” Smith and her husband Robert Ignatius Maloney Sr., an auditor who worked for the telephone firm AT&T Corporation, Dorothy Malone was born as Dorothy Eloise Maloney in Chicago, Illinois, in 1924.

Patsy Jane, Joan Esther, Robert Bruce, and George William Maloney were her siblings. One of her brothers was later killed by lightning while on a golf course, while both of her sisters passed away from issues associated with polio.

She and her family relocated to Dallas, Texas, in July 1925, where she attended Highland Park High School, Ursuline Convent, and Hockaday School for Girls. Later, she pursued her goal of becoming a nurse by attending Southern Methodist University.

RKO signed Dorothy Malone under her real name, Dorothy Maloney, when she was 18 years old. She made her acting debut in the 1943 film “Gildersleeve on Broadway,” when she played a model.
The Falcon and the Co-eds, Higher and Higher, Step Lively, Show Business, Youth Runs Wild, and One Mysterious Night was the next films in which she appeared.

She obtained a contract with Warner Bros. in 1944, and she later appeared in the films “Frontier Days,” “Too Young to Know,” and “Hollywood Canteen.” When she was chosen for the 1946 movie “The Big Sleep,” the actress first gained notoriety. In the subsequent films “Janie Gets Married,” “Night and Day,” and “To the Victor,” she was given larger roles.

In the 1948 film “Two Guys from Texas,” she had her first leading role. Before departing the studio in 1949, she subsequently made appearances in the movies “One Sunday Afternoon,” “Flaxy Martin,” “South of St. Louis,” and “Colorado Territory.”

Malone was chosen to play Karen Galt in the 1950 film “The Nevadan.” Later, she appeared in “Convicted” and “The Killer Who Stalked New York.” Soon after, she starred as Lola Gillway and Dr. Ann F. Rollins, respectively, in the films “Mrs. O’Malley and Mr. Malone” and “Saddle Legion.”

The American beauty then started performing in television roles at the same time, making appearances in such programs as “Omnibus,” “Four Star Playhouse,” “The Doctor,” “The Revlon Mirror Theatre,” “Fireside Theatre,” “Lux Video Theatre,” “The Christophers,” “General Electric Theatre,” and “Appointment with Adventure.”

Malone appeared in the 1955 motion pictures “The Fast and the Furious,” “Tall Man Riding,” “Sincerely Yours,” “Artists and Models,” and “Westerns: At Gunpoint” on the big screen.

Later, in 1956, she was given the role of Marylee Hadley in the drama movie “Written on the Wind.” She received other significant roles in films including “Man of a Thousand Faces,” “Tip on a Dead Jockey,” “Too Much, Too Soon,” “The Last Voyage,” and “The Last Sunset” after its success.

During this time, the actress also appeared on television in the shows “Route 66,” “Checkmate,” “Death Valley Days,” “The Dick Powell Theatre,” “The Untouchables,” “The Greatest Show on Earth,” and “Arrest and Trial.” She made an appearance in an “Insight” episode in 1967. She acted in the television film “The Pigeon” two years later.

Malone made cameos on several TV dramas between 1972 and 1976, including “The Bold Ones: The New Doctors,” “Ironside,” “Ellery Queen,” “Rich Man, Poor Man,” and “The Streets of San Francisco.”
In 1977, she portrayed Mrs. Skinner in the action-thriller movie “Golden Rendezvous.” She had appearances in the television films “Murder in Peyton Place,” “The November Plan,” and “Little Ladies of the Night” that same year.

The American beauty appeared in supporting roles in the films “The Day Time Ended,” “Good Luck, Miss Wyckoff,” and “Winter Kills” as well as in the television series “The Hardy Boys/Nancy Drew Mysteries,” “Vega$,” and “The Greatest Heroes of the Bible” during the years 1978 and 1979.

In 1980, she received the role of Molly Denniver in the television drama “Condominium.” Malone also made an appearance in “The Littlest Hobo” episode that year. She continued to work despite her advancing years, appearing in numerous films and television shows, such as “Peyton Place: The Next Generation,” “The Being,” and “Basic Instinct” in the late 1980s and early 1990s.

In the 1955 film “Battle Cry,” Dorothy Malone plays a big role as a married woman who has a love affair with a young soldier when the world is at war. The film was a huge success.
She portrayed Constance MacKenzie Carson in the drama series “Peyton Place” from 1964 to 1968. She made a name for herself as a popular TV actor with this role. She received various honors and prizes for this performance.

She was given the “Golden Apple Award” in 1965 for “Peyton Place” as the actress who was most cooperative. Her performance in the same earned her a nomination for a Golden Globe Award and the “Photoplay Award” for the most popular female star.

In 1959, Dorothy Malone wed actor Jacques Bergerac. Before divorcing in 1964, the couple had two children, Mimi and Diane. After a protracted legal custody dispute between the two, Dorothy was ultimately awarded primary custody of the kids.

After that, in 1969, the actress wed stockbroker Robert Tomarkin. Sadly, she was only married to Tomarkin for a short period of time.
Her third marriage, which she entered into in 1971 with businessman Charles Huston Bell, dissolved after two years.

One of the wealthiest and most well-known movie actresses is Dorothy. According to our research, Dorothy Malone has a net worth of $5 million, as reported by Forbes, Wikipedia, and Business Insider.

Malone won a beauty pageant before making it big in Hollywood.
She charged that her first husband, Jacques Bergerac, had only married well-known women to advance his profession.

She participated actively in the Hollywood Republican Committee as well.
She was William Vanderstraaten’s and John Thompson’s mother-in-law.