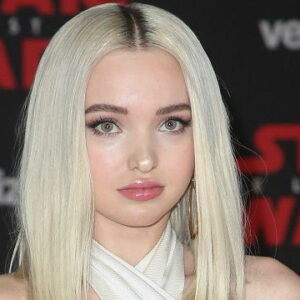 Dove Cameron, whose real name is Chloe Celeste Hosterman, is a well-known actress who rose to prominence thanks to her ‘Disney Channel’ television series. Dove began landing jobs in movies and television productions after three years as a prominent face of this prestigious channel. Chloe has been interested in performing since she was a child and has studied dramatics since she was eight years old. Cameron was keen to pursue her acting career at the age of 14, and persuaded her parents to relocate to Los Angeles. She subsequently landed the role of the twins in the television series ‘Liv and Maddie,’ which earned her a lot of attention. Cameron, like many other celebrities, has been bullied. This scar, however, did not deter the girl from achieving her goals. For her work on ‘Liv and Maddie,’ Dove was also nominated for a ‘Teen Choice Award’ for ‘Female Breakout Star.’ Cameron, who is also a member of a band, has a slew of new records and films in the works for the near future.

Dove debuted in the entertainment world in 2012, although she has just lately gained fame. Her debut appearance on television was in the ‘Disney Channel’ sitcom ‘Bits and Pieces,’ in which she played Alanna. She has since appeared in a number of other programs, including ‘The Mentalist,’ ‘Malibu Country,’ and ‘Austin and Ally.’ ‘Liv and Maddie,’ a Disney Channel sitcom, helped Dove receive a lot of attention. Dove took on the roles of Liv and Maddie in this film.

Cameron released a promotional single in August 2013 that was a rendition of ‘On Top Of The World,’ a song by the band ‘Imagine Dragons.’ Her cover was ranked seventeenth on the Billboard Kid Digital Songs chart, where it remained for three weeks. The label ‘Walt Disney Records’ later issued another record, named ‘Better In Stereo,’ in October. Dove’s hit song was this cover, which reached number one on the Billboard Kid Digital Songs chart. On Aug 15, 2020 at 2:04pm PDT, (@dovecameron) shared a post. This teen actress and singer has also appeared in a number of films. Disney’s ‘Descendants,’ which premiered in July 2015, was her debut television film. The young actress was also cast in the second installment of the popular series. ‘Cloud 9’ was Chloe’s first film, in which she co-starred with Luke Benward, another ‘Disney’ star.

Dove and her ‘Liv and Maddie’ co-star Ryan McCartan founded the band ‘The Girl and the Dreamcatcher.’ The team released their first single, ‘Written in the Stars,’ in October 2015. On the 29th of January, 2016, their second single, ‘Glowing in the Dark,’ was released. This band now has a total of nine songs under its belt.

Dove Cameron is just like any other girl, and a lot of people can identify with her. Dove is infatuated with her teddy bear and the famed coffee shop ‘Starbucks.’ She adores her teddy so much that she virtually always brings it with her and has given it the name ‘Stanley.’
Dove is a down-to-earth person who does her hardest to make others happy. The actress stated in one of her interviews that she regularly sings for people from her car window while driving. This gesture appears to make people joyful, as evidenced by the fact that some of them dance.

Dove has a devoted following who, unexpectedly, do not accept her death, even if it occurs on television. That is correct! Dove appeared on one of the episodes of ‘Faking’ that aired on ‘MTV.’ The episode focused on a serial killer who had murdered three blonde-haired young women.

Some fans quickly discovered that one of the girls displayed was Dove, and flocked to the microblogging site ‘Twitter’ to vent their rage at the character’s death. “I was just watching #FakingIt last night. Paul, one of her followers, tweeted, “Am I loosing it, or did I see @Dove Cameron in a blink and you’ll miss it cameo?”

Philip Hosterman and Bonnie Wallace had a daughter named Dove. Cameron and her sister Claire relocated to Los Angeles in order for Cameron to pursue her acting career. Philip died in 2011, and the actress decided to alter her name to Dove in honor of him, as her father used to call her.

Dove made headlines when word of her engagement to Ryan McCartan, her co-star, spread like wildfire. Dove and Ryan met on the set of their Disney Channel sitcom ‘Liv and Maddie.’ The couple had been together for three years when Ryan announced their engagement in April. He announced the news by posting a photo of the two of them on his ‘Instagram’ account with the message “Dedicating my 1,000th post to my fiancé.” I can’t believe I got to address you as such. “Thank you for agreeing.” Dove confirmed the news by posting a selfie of the two of them on her ‘Instagram’ account, captioning it, “Calling you my ‘boyfriend’ never really felt right anyhow, Fiancé looks better on you.”

Six months after their engagement was announced, tabloids speculated that the pair was on the verge of breaking up. When Ryan ‘unfollowed’ Dove on ‘Instagram’ and ‘Twitter,’ rumors about their breakup spread quickly.
The conclusion is that the couple ended their relationship due to their busy schedules. Ryan confirmed it, saying, “She is really busy.” I’m quite busy. And the last thing we want to do is make it into something else on our to-do list, you understand?”

Dove’s parents co-owned and developed for an Indian jewelry firm. As a result, until she was 14, the young actress spent the majority of her summer in India.

Dove Cameron has a net worth of $3 million.