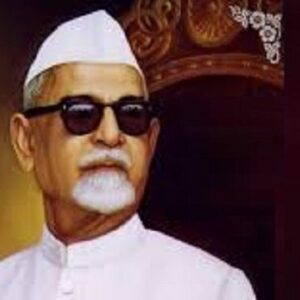 Dr. Zakir Husain was India’s third President and the first Muslim to hold the position. He was a well-known educator and philosopher who made a significant contribution to the establishment of contemporary India through education. Zakir Husain had an interest with politics since he was a child, which he tried to fulfill through schooling. As an educator, he steadily ascended the social ladder, eventually becoming one of modern India’s most important educational theorists and practitioners. Husain was a firm believer that national rejuvenation could not be achieved alone through active politics. He was well aware of the importance of education and hence devoted himself entirely to it. He was the Vice Chancellor of Jamia Milia Islamia for 22 years, making it one of the most prestigious educational institutions in the country. He devoted his entire life to promoting education and the ideals of secularism. He was given the Bharat Ratna, India’s highest national honor, for his services to the country.

On February 8, 1897, in Kaimganj, Farrukhabad, Zakir Husain was born to Fida Husain Khan and Naznin Begum. His family had relocated to Kaimganj after originally settling in Hyderabad. He was the third of the couple’s seven kids to be born.

Husain’s early years were marred by tragedy, since his father died while he was only ten years old. Husain’s mother died three years later, leaving Husain and his six siblings orphaned.
He received his early schooling at Etawah’s Islamia High School before enrolling at the Anglo Muhammadan Oriental College, which is now known as Aligarh Muslim University.

He developed a curiosity and bent for politics while in college, which would define the rest of his life. He was a prominent student leader in college. In 1918, he received his B.A. Honors and enrolled in M.A., but Mahatama Gandhi’s Khilafat and Non-Cooperation Movement motivated him to abandon the government-run college.

In October 1920, he accompanied a small group of students and lecturers to Aligarh, where they established the National Muslim University. They moved the university to Karol Bagh five years later, before finally renaming it Jamia Milia University and relocating it to Jamia Nagar in New Delhi.

Between 1920 and 1922, he worked as an instructor at Jamia Milia University for two years. However, his profound interest in education compelled him to return to Germany to complete his PhD in Economics at the Frederick William University of Berlin, which he received in 1926.

He published a collection of the best works of the greatest Urdu poet Mirza Assadullah Khan ‘Ghalib’ in Germany.
When he returned to India, he chose a different approach, aiming to contribute to the independence movement by utilizing education as the primary tool, while other political bigwigs were actively involved in politics and Mahatama Gandhi’s Swaraj and Civil Disobedience Movement.

In 1927, he became the president of Jamia Milia Islamia University, which had fallen out of favor and was on the verge of closing due to financial limitations. He wanted to bring the university back to life.

He worked relentlessly for the following twenty-two years to improve the university’s academic and managerial standards. Under his guidance, the educational institute not only stayed viable, but also helped to India’s campaign for independence from British rule.

Under his guidance, the educational institute stayed true to its mission of disseminating education to the public. He was a firm believer that national rejuvenation could not be achieved solely through active politics. Reformatory education would also play a significant role.

As a teacher and educator, he promoted Mahatma Gandhi’s and Hakim Ajmal Khan’s teachings and experimented with value-based education. He quickly rose to prominence as one of the country’s most renowned educational thinkers.

Following that, he became an active participant in the founding of various educational reform initiatives in India. He earned the respect of arch political opponents such as Mohammad Ali Jinnah as a result of his consistent and unwavering efforts.

He was chosen Chairman of the Education Committee on October 23, 1937. His effort entailed developing a basic education program, which was considered during the conference. In December 1937, he turned in his report.
He became Vice Chancellor of the Aligarh Muslim University in 1948, just after India got independence, which was in a crisis since some of its academics were actively involved in the partition of the country and vowed their support for the construction of a separate state of Pakistan.

In 1956, he was nominated to the Upper House of Parliament following his stint as Vice Chancellor. He was named Governor of the State of Bihar shortly after becoming a Rajya Sabha member, a position he held for five years, from 1957 to 1962.

He was named Vice President of India in 1962. He held the position for the entire five-year tenure before being elected President of India on May 13, 1967. He made history by becoming the first Muslim to hold such a distinguished position.

Throughout his presidency, he wowed everyone with his tenderness, courteousness, and sense of humanity. He treated everyone with kindness and tenderness, regardless of their social, political, or economic background. He was the leader of four state trips to Hungary, Yugoslavia, the Soviet Union, and Nepal.

He was not only the founder of Jamia Milia Islamia University, but also its Vice Chancellor. He has made such a significant contribution to the institution that their histories have become inextricably linked.

He received the Padma Vibhushan award in 1954.
He was awarded the Bharat Ratna, India’s highest national honor, in 1963.

He married Shah Jahan Begum at the age of 18 in 1915, following the tradition of early marriage. Sayeeda Khan and Safia Rahman, the couple’s two daughters, were born to them.

Salman Khurshid, his grandson, carried on his political heritage by running for Congress. In the previous government, he even assumed the role of India’s Foreign Minister.

On May 3, 1969, he died in office, becoming him the first Indian President to do so. He and his wife were buried on the grounds of Jamia Milia Islamia in New Delhi. In recognition of his achievements and works, a beautiful mausoleum was built in Jamia Milia Islamia. The most significant contribution he made in his life also serves as the most visible example of a legacy of his work that continues to this day in the form of Jamia Milia Islamia, which has become one of India’s most prestigious educational institutions.

The estimated net worth of Dr Zakir Husain is unknown.