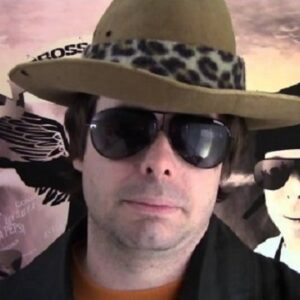 Dross Rotzank is a YouTuber, writer, blogger, and journalist from Venezuela. Despite the fact that he is best known for his YouTube channel, which he founded in 2006, David Revilla began his career as a writer and blogger. During his early career, he enjoyed producing game reviews and sarcastic essays in addition to being a Hispachan administrator and contributor. His personal blog, “El Diario de Dross” or “The Diary of Dross,” gained him a lot of attention and helped him pursue a career as a professional writer. He began uploading videos to his YouTube account in 2008. His videos gained popularity, prompting him to begin regularly uploading videos on YouTube. Dross’ videos currently focus on horror, mystery, and interesting facts. He has written five books to far, the first two of which were primarily memoirs that included his personal tale of how he built a large online following, and the last two of which were novels that were best sellers and garnered him critical and economic success.

Early in his career, ngel David Revilla utilized the name Dross Rotzank to write on video gaming forums like Meristation and Vandal. The name, on the other hand, has a history. Revilla wanted to use the nickname “Droz” on the forums, which he got from then-WWF fighter Warren Droz. He misspelled “Droz” and wrote “Dross” instead in his first forum posts. Because his first posts were so successful, he decided to keep the “misspelled” moniker and grew popular with it over time. His own blog debuted in 1998, but it was simply a basic version with infrequent updates until 2005, when he decided to revamp “El Diario de Dross” with a more fanciful style and more frequent updates.

His YouTube account, ‘DrossRotzank,’ was launched on March 9, 2006, shortly after he began seriously posting on his own site. However, until October 2008, when he chose to publish a few videos to accompany some of his essays, it had no entries. “Dross juega I Wanna Be The Guy” was the first video he posted to his YouTube channel (Dross plays I Wanna Be The Guy). This video quickly acquired popularity, prompting Dross to pursue vlogging seriously and begin releasing videos on a daily basis. Dross continued to post videos on a regular basis from 2008 to 2013, usually with his thoughts on current events. “Dross cuenta 3 historias de terror” was one of the horror stories he told in his videos (Dross tells 3 horror stories). Late in 2013, Dross shifted the focus of his channel to horror, scary mysteries and truths, Top videos (typically Top 7s), conspiracies, and other topics.

Three times a week, new videos are added to his channel, with the majority of them being horror stories and “Top 7” videos, which are particularly popular on Sundays. “Dross tells three terrifying stories” is one of the portions of the channel that is still active, however videos are now released at longer intervals. Dross also has a second channel called ‘Los Vlogs de Dross,’ where he broadcasts videos about a variety of themes. His YouTube channel, ‘DrossRotzank,’ surpassed 8 million subscribers in 2016, making it the most subscribed horror-genre channel on the platform. The channel currently has over 10 million subscribers. There have been over 300 million views of this video. The video “Las 7 cosas más revoltingas encontradas en comidas de McDonalds,” which depicts a countdown of the most revolting items given incorrectly at McDonald’s, is now Dross’ most popular video.

Apart from uploading YouTube videos and writing blogs, Dross has also pursued a successful career as a writer. He published “Luna de Plutón,” or “Pluto’s Moon,” in 2015, and it became a best seller in Spain and Latin America within a few weeks of its release. In 2016, he published his second book. Dross Rotzank’s most recent novel, which is a sequel to his first, was released in March 2017.

Dross Rotzank was born in Caracas, Venezuela, on July 16, 1982, as ngel David Revilla. There isn’t much known about his personal life or family, but he has made it obvious in interviews that the person he portrays in the vlogs and the real person behind it are vastly different. He is currently based in Argentina’s capital, Buenos Aires.

Estimated Net Worth of Dross Rotzank

Dross Rotzank’s net worth is unknown.