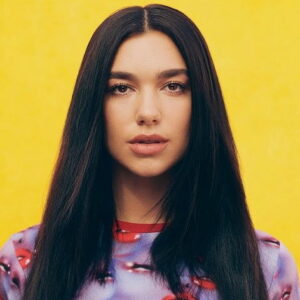 Dua Lipa is an English singer, songwriter, and former model who, with the publication of her self-titled debut album, has established herself as one of the most popular singers of her generation. The album, which has so far produced eight songs, included the UK number-one hit ‘New Rules,’ as well as two more UK top-10 singles, ‘Be the One,’ and ‘IDGAF.’ ‘New Rules,’ her best-selling single, having charted at No. 2 in Australia, No. 6 in the United States, and No. 7 in Canada. Lipa, who describes her music as dark pop, began posting cover versions of songs by her favorite musicians on YouTube when she was 14 years old, including P!nk and Nelly Furtado. For her debut album, she eventually landed a deal with Warner Music Group. In the most recent edition of the event, she took up two ‘Brit Awards,’ for ‘British Female Solo Artist’ and ‘British Breakthrough Act.’ She’s one of the favorites to record the theme song for the next James Bond film.

Dua Lipa was born in London, England, on August 22, 1995, to Dukagjin Lipa, an Albanian rock singer who later became a marketing executive, and his wife, Anesa Lipa. Rina is her younger sister, while Gjin is her younger brother. Her parents, ethnic Albanians from Pristina, Kosovo’s capital, had fled violence and oppression in the 1990s by migrating to Europe.
Despite not being pressured to become a performer, she was affected by her singer father. Following a traumatic high school experience, she enrolled part-time at the famed Sylvia Young Theatre School, where the teacher placed her with older kids to help her gain confidence.
Her family returned to Kosovo when Kosovo gained independence in February 2008, but she struggled to fit there. When she was 14, she began recreating songs by her favorite singers on YouTube, and at the age of 15, she persuaded her parents to allow her to return to London to pursue a career in music.

Dua Lipa moved to London and lived with some friends in Camden, where she worked as a nightclub hostess among other things. She went to drama school alongside her pals, but finally dropped out to focus on music for a year, never to return.
She began her modeling career at the age of 16 after being approached by a management, but due to her size, she was never given suitable assignments, with the exception of a television commercial for ‘The X Factor.’ She did modeling in order to meet people who were interested in music.
She advertised her YouTube channel actively to new contacts, and in 2015, she landed a deal with Warner Music Group for her debut album. In August 2015, she released her promotional debut single, ‘New Love,’ which was produced by Emile Haynie and Andrew Wyatt and had lyrics written by her.
Her second single, ‘Be the One,’ which was released in October 2015 and was the only song from her album that she didn’t write, was a hit in Europe and Australia. The single, which served as the first real single for her impending self-titled debut album, charted in the top ten in over 11 European countries, including No. 1 in Belgium.
She was announced as a member of the BBC’s ‘Sound of…2016’ selection in November 2015. In January 2016, she embarked on her maiden tour of the United Kingdom and Europe, which lasted until November of that year.
‘Last Dance,’ her album’s second single, was released on February 9, 2016, although it did not chart in any country. The third song, ‘Hotter than Hell,’ was released on May 6 and reached number 15 in the UK, as well as the top 20 in a number of other countries.
Her following single, ‘Blow Your Mind (Mwah),’ was released on August 26, 2016, and was inspired by her previous attempts to modify herself physically in order to acquire modeling assignments, which had a negative impact on her mental health. It topped the ‘Billboard Dance Club Songs’ chart and peaked at No.23 on the ‘Billboard Mainstream Top 40’ list, making it her first US ‘Billboard Hot 100’ entry at No.72. It also topped the ‘Billboard Dance Club Songs’ chart and peaked at No.23 on the ‘Billboard Mainstream Top 40’ chart.
In November 2016, she appeared on Sean Paul’s track “No Lie,” which charted at number 10 in the United Kingdom. In January of the following year, she released the track “Scared to Be Lonely” with Martin Garrix, which reached No. 14 in the UK.
On June 2, 2017, she eventually published her debut album, which charted at No. 3 in the UK, after nearly two years of labor. The following month, she released ‘New Rules,’ which became her first UK number one hit. It reached No. 2 in Australia, No. 6 in the United States, and No. 6 in Canada on the charts. On June 23, 2017, her performance at the Glastonbury Festival drew one of the largest crowds in the festival’s history. She appeared on the BBC’s music television show ‘Later… with Jools Holland’ in October 2017.
She was the only artist to garner nominations in five categories at the ‘Brit Awards’ in January 2018, making her the first female musician to do it. She took home the honors for ‘British Female Solo Artist’ and ‘British Breakthrough Act,’ as well as performing at the awards ceremony on February 21 at the O2 Arena in London.
She wrote the song ‘High’ for the soundtrack of the film ‘Fifty Shades Freed,’ which was released in February 2018. She collaborated with electronic music producer Whethan. In April of that year, she contributed vocals and lyrics to Calvin Harris’ hit “One Kiss,” which went on to become her second UK chart-topping single.
Her second studio album is currently in the works.

Dua Lipa had a two-year romance with celebrity chef and model Isaac Carew, which ended in February 2017. She later became connected with artist Paul Klein, although it was reported that she was back with Carew after only five months.
‘The Fader’ magazine commissioned a documentary on the singer’s life in December 2016. The ‘See in Blue’ short video may be accessed on the magazine’s YouTube account.
She was one of the performers that contributed vocals to Simon Cowell’s charity single, ‘Bridge Over Troubled Water,’ for the families of the victims of the Grenfell Tower fire in London, in June 2017. She and her father had previously created the Sunny Hill Foundation to help the people of Kosovo.

Dua Lipa has a net worth of $25 million.

Dua Lipa used to dislike her unusual name, which means “love” in Albanian, but she now appreciates the fact that she can use it as a stage name as well.