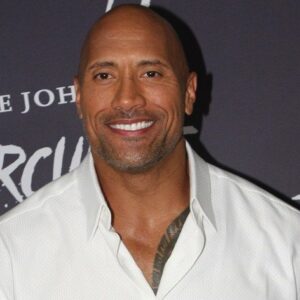 Dwayne Johnson is a professional wrestler turned actor best recognized for his role in ‘The Mummy Returns,’ a fantasy adventure film. Johnson is known by his ring name, ‘The Rock,’ and was a highly successful professional wrestler before venturing into cinema. He was born into a wrestling family, so it’s no wonder that he’s built a name for himself in the sport. He was athletic and sports-inclined from an early age, and as a school student, he participated in a variety of sporting activities. He was a part of his high school’s football team, as well as the track and field and wrestling teams. He was a promising football player who obtained a full scholarship to play defensive lineman at the University of Miami. When an injury put an end to his football dreams, he was hopeful of making it big as a professional footballer. Despite his disappointment, he did not let the incident deter him and instead decided to pursue a career as a wrestler. His father, who is also a professional wrestler, began training him. He eventually made his WWF debut and went on to become a renowned wrestler. He began his acting career with the film ‘The Mummy Returns’ after receiving approaches from Hollywood studios due to his notoriety and rugged good looks.

Dwayne Douglas Johnson was born on May 2, 1972, in Hayward, California, USA. Rocky Johnson, his father, was a professional wrestler, and Ata Maivia, his mother, was the daughter of a wrestler. His father is of Black Nova Scotian ancestry, while his mother is of Samoan ancestry, which accounts for his unique appearance.
He attended the Richmond Road Primary School in New Zealand for a short time before returning to the United States and enrolling at Freedom High School.
He was an athletic adolescent who took part in a variety of sports. He was a part of the football, track and field, and wrestling teams at his high school.
Football was his favorite sport, and he obtained a full scholarship to play defensive tackle at the University of Miami. His hopes of becoming a football player were crushed, though, due to an injury. He received his Bachelor of General Studies in criminology and physiology in 1995.
His father gave him his first training as a wrestler after he decided to pursue a career in the sport.

In 1996, Dwayne Johnson made his WWF debut as Rocky Maivia, and the following year, he defeated Hunter Hearst Helmsley for the WWF Intercontinental Championship on Monday Night Raw.
He finally changed his ring name to ‘The Rock,’ and went on to become a successful professional wrestler with a number of championships to his name. His wrestling prowess, along with his rugged good features, made him a hit with female fans, and he began receiving offers to perform on both the small and big screens.
He hosted ‘Saturday Night Live’ in 2000 after appearing in a music video. In 2001, he made his big screen debut as The Scorpion King in the opening sequence of ‘The Mummy Returns.’
The success of the film led to the release of a sequel, ‘The Scorpion King,’ in 2002, in which Johnson played Mathayus. For this film, he was reportedly paid US $5.5 million, and it went on to be a minor hit.
In 2007, he starred as Joe Kingman, a divorced father, in the family comedy film ‘The Game Plan.’ Despite receiving terrible reviews from critics, the film opened at No. 1 at the box office, grossing $22,950,971 in its first weekend.
In 2009, he starred in the science fiction film ‘Race to Witch Mountain,’ which was based on Alexander Key’s novel ‘Escape to Witch Mountain.’ This film, too, debuted at No. 1 and went on to become a major box office success.
In 2011, Dwayne Johnson starred as Luke Hobbs, a Diplomatic Security Service agent, in the fifth installment of The Fast and the Furious film series, ‘Fast Five.’ The film was a commercial success for Johnson, grossing over $86 million in its opening weekend.
In 2013, he played Luke Hobbs again in ‘Fast & Furious 6,’ the sixth movie in the Fast and Furious franchise. His co-stars were Vin Diesel, Paul Walker, Gina Carano, and John Ortiz. The film grossed nearly $780 million worldwide, placing it at No. 50 on the list of highest-grossing films of all time.
In 2015, he starred in ‘Furious 7,’ the seventh entry in the Fast & Furious franchise. Like the previous films in the franchise, this one became a blockbuster and gained critical acclaim for its action sequences. In 2016, Dwayne Johnson starred in the action comedy ‘Central Intelligence,’ and in the Disney animated film Moana, he voiced the character of Polynesian demigod Maui. In 2017, he reprised his role in ‘The Fate of the Furious,’ the eighth movie of the Fast and Furious franchise. He also starred in the films ‘Baywatch’ and ‘Jumanji: Welcome to the Jungle’ in the same year. He appeared in two action flicks in 2018, ‘Rampage’ and ‘Skyscraper.’ In 2019, Dwayne Johnson starred in Jumanji: Welcome to the Jungle: The Next Level. Dwayne Johnson produced and starred in the HBO series Ballers from 2015 to 2019. In six years, the series was HBO’s most-watched comedy.

Dwayne Johnson is most known for his role as Luke Hobbs in the Fast and Furious film series. All of the films in the franchise starring him have been box office smashes, and he has gotten high recognition for his acting abilities.

For the film ‘The Mummy Returns,’ he won the Teen Choice Awards in the category “Film – Choice Sleazebag” in 2001. He was named Action Star of the Year at the 2012 CinemaCon Awards. For ‘Journey 2: The Mysterious Island,’ he got the Kids’ Choice Award for Favorite Male Butt Kicker in 2013.

On May 3, 1997, Dwayne Johnson married his longtime girlfriend Dany Garcia. Simone Alexandra is their daughter. They chose to divorce peacefully in 2007 after ten years of marriage.
Johnson began dating Lauren Hashian shortly after his divorce from Dany Garcia. He met her for the first time in 2006 while filming ‘The Game Plan.’ Jasmine Johnson, their first child, was born in December 2015, and Tiana Gia Johnson, their second child, was born in April 2018.
On August 18, 2019, Dwayne Johnson married Lauren Hashian in Hawaii.