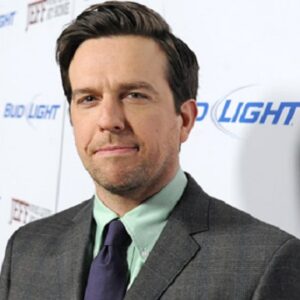 Ed Helms is an actor from the United States who is most known for his comedic roles. The television programs ‘The Daily Show,’ ‘The Office,’ and the feature picture trilogy ‘The Hangover,’ are among his most well-known works. He began his career as a stand-up comedian and writer after earning a degree in film theory and technology. Simultaneously, he began recording voice-over snippets, which eventually led to acting roles. Though he began his career in television shows, he soon moved on to minor roles in feature pictures. In addition to acting, he has co-written and produced films throughout his career. He’s also known for contributing his voice to a number of animated feature pictures. He has won honors such as the Screen Actors Guild Award and the Teen Choice Award for his performances. He founded his own production firm, ‘Pacific Electric Picture Company,’ in 2013. Ed Helms is also a member of the band ‘The Lonesome Trio.’ He has appeared in various music videos, including those by Mumford & Sons and Maroon 5. From Knox College in Illinois, he received an honorary doctorate in fine arts.

Edward Parker “Ed” Helms was born in Atlanta, Georgia, on January 24, 1974, to John A. Helms, a navy veteran, insurance executive, and lawyer, and Pamela Ann Helms, a school administrator.

Susan Carol Helms, his older sister, and John Paxton Helms, his younger brother, are his siblings.
He had significant surgery at the age of 14 to correct a serious case of heart murmur.

He studied theater arts and played the guitar while in high school at the Westminster Schools. He enrolled in Oberlin College in Ohio after graduating in 1992. Despite his initial interest in geology, he went on to earn a B.A. in film theory and technology in 1996.

As part of a student exchange program, he had the opportunity to spend a semester at New York University’s Tisch School of the Arts. ‘The Obertones,’ an a capella group, taught him improv and singing during this time.

Ed Helms moved to New York City after graduating and began his career there. He began his career as a writer and performer in New York sketch comedy ensembles, while also learning improv with the ‘Upright Citizens Brigade’ company.

Later, he worked as a film editor trainee at ‘Crew Cuts,’ a post-production facility in New York City. Simultaneously, he recorded voice-over records, which led to work as a voice-over artist and eventually acting.

He was doing stand-up comedy in New York when he had the chance to audition for ‘The Daily Hunt,’ a satirical news program. He was cast in the role and worked as a correspondent for the show from 2002 until 2006.

‘Mark Your Calendar,’ ‘Digital Watch,’ and ‘Ad Nauseam’ were among the portions of the show where he served as host and ‘field reporter’ at this time. Even though he departed the show in 2006, he returned on occasion thereafter.
In 2004, he made his feature film debut with ‘Blackballed: The Bobby Dukes Story,’ an improvised comedy. The movie went on to win a number of prizes.

He joined the cast of the television series ‘The Office’ in 2006. His portrayal of Andy Bernard, a nostalgic Cornell alumnus with a fondness for A capella music, drew a lot of praise. The Emmy Award-winning show ran for nine seasons, until it was cancelled in 2013.

He has voiced characters in animated films such as ‘Monsters vs. Aliens’ (2009) and ‘The Lorax’ (2009) as a voice over artist (2012).
Ed Helms has appeared in a number of television shows, including “Arrested Development,” “Cheap Seats,” “Tanner on Tanner,” and “Wilfred.”

Apart from performing, he is a member of ‘The Lonesome Trio,’ a bluegrass band he formed with college buddies Ian Riggs and Jacob Tilove. The band performs a number of times throughout the year.

In 2013, Ed Helms established his own production firm, ‘Pacific Electric Picture Company.’ In the same year, he co-wrote, acted in, and produced the Yahoo! web series ‘Tiny Commando.’

‘What’s the point’ (2017), ‘The Clapper’ (2017), and ‘Chappaquiddick’ are among his planned film projects (2017). He’ll also be seen in ‘Captain Underpants: The First Epic Movie,’ a forthcoming animated film. Ed Helms is also a member of the upcoming television series “The One Percent.”

Ed Helms is well-known for his comedic performances, such as as a journalist on ‘The Daily Show’ and as Andy Bernard in the television series ‘The Office.’ He has received a lot of praise and acclaim for his role in the ‘Hangover’ film trilogy.

For his roles in feature films and television, Ed Helms has been nominated for a number of accolades. For the television series ‘The Office,’ he earned the 2008 Screen Actors Guild Award for Outstanding Ensemble in a Comedy Series.

For the film “The Hangover Part II,” he received the Teen Choice Award in the “Choice Movie: Hissy Fit” category in 2011.

He received an honorary Doctor of Fine Arts degree from Knox College, where he gave the commencement address in 2013.

His net worth is reported to be USD 20 million.

This actor is a skilled harmonica musician as well. For numerous ensembles, he also plays banjo and bluegrass guitar.

This actor is a skilled harmonica musician as well. For numerous ensembles, he also plays banjo and bluegrass guitar.