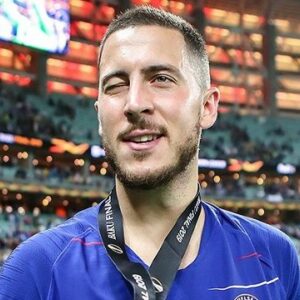 Eden Hazard is a Belgian professional footballer who has played for the Belgian national team as well as prominent teams like Chelsea FC and Real Madrid. He is a midfielder who is noted for his attacking abilities. He’s won the admiration of his opponents, who call him a “superior passer” and a “defender’s nightmare.” He began playing football at a young age, having been born to footballer parents. It all started when he sneaked into the ‘Royal Stade Brainois’ playground from his backyard without informing anyone. When the coach of the football team came to their house to compliment the young boy’s talent, his parents found he had sneaked onto the football team’s playground. He quickly began practicing on a daily basis in order to become a professional player. Despite the fact that his first competitive game, which he played against a ladies’ team at the age of eleven, resulted in a humiliating 5-0 loss, he made his way into LOSC Lille’s first team at the age of 16. He eventually got a chance to play for ‘Chelsea FC’ and put up performances that were comparable to those of Lionel Messi and Cristiano Ronaldo, the two Ballon d’Or winners. Hazard is known for his dribbling prowess, speed, and creativity.

Eden Hazard was born in La Louvière on January 7, 1991, and raised in Braine-le-Comte. His father, Thierry, was a defensive midfielder in the Belgian Second Division for ‘La Louvière,’ while his mother, Carine, was a striker in the Belgian Women’s First Division.
When Carine was three months pregnant with Eden, she decided to stop playing. She went on to have three more boys, Thorgan, Kylian, and Ethan, all of whom went on to play football.

Eden Hazard began playing football for his hometown team, ‘Royal Stade Brainois,’ when he was just four years old. Hazard, who was immediately noticed by the coaches as a “talented” player, spent eight years with the club.
A scout from ‘Lille OSC,’ a first division team in France, noticed him after he moved to Tubize at the age of 13. Eden’s parents eagerly accepted the offer to transfer a 16-year-old Eden to Lille after meeting with club officials, anticipating that the training facilities would be better there.

Eden joined ‘Lille’ in 2005 and spent the next two years training at the club’s local sports academy. On May 28, 2007, he signed his first professional contract, a three-year deal with ‘Lille.’
On September 1, 2007, he made his amateur debut as a replacement player in a league match against ‘Racing Club de France.’ On November 24, 2007, he made his professional debut in a league match against ‘AS Nancy,’ coming on as a 78th-minute substitute.
During the 2008–09 season, manager Rudi Garcia moved him to the senior team. Following that, he was offered a three-year contract extension by ‘Lille.’ He was the first international player to be named ‘UNFP Young Player of the Year,’ and he helped his team qualify for the newly founded ‘UEFA Europa League.’
Several popular clubs expressed interest in him during the 2009–10 season, with Zinedine Zidane, a football star and his idol, personally recommending him for ‘Real Madrid.’ He did, however, stay with ‘Lille,’ signing a contract to stay with the company until 2014. He went on to win the UNFP Young Player of the Year award for the second year in a row, making him the first player to do so.
During the next season, he continued to impress on the pitch, and he was nominated for the ‘UNFP Ligue 1 Player of the Year’ award for the second time. He became the youngest player in history to win the tournament.
He played his 100th consecutive Ligue 1 match in the 2011–12 season, becoming the player with the longest run in the French top flight. For the second year in a row, he was named UNFP Player of the Year, making him only the second player in UNFP history to win the honor in consecutive seasons.

Officials from ‘Chelsea’ and ‘Lille’ reached an agreement in June 2012 to draft Hazard into their side. On July 18, 2012, he made his debut for the squad in a pre-season friendly match against the ‘Seattle Sounders.’
He was suspended for three games during the 2012–13 season after accidently kicking the ball-boy who was purposefully lying on the ball to waste time. He was one of 23 players nominated for the prestigious ‘FIFA Ballon d’Or’ award the following season. While he was beaten by Luis Suárez for the PFA Player of the Year title that year, he did win the PFA Young Player of the Year award.
On February 12, 2015, he signed a new five-and-a-half-year contract with ‘Chelsea.’ He was named the best player in the league that season, winning the PFA Player of the Year title. He was also named Chelsea’s ‘Player of the Year’ for the second year in a row, making him only the fifth player in club history to do so.
He rediscovered form in the second half of the 2015-16 season after going scoreless for 30 games at the start of the season. During his five-year spell with ‘Chelsea,’ he continued to impress, leading his club to 12 straight league triumphs and was named to the ‘PFA Team of the Year’ for the fourth time.

Eden Hazard made his senior national football team debut against Luxembourg on November 18, 2008, after previously playing for the Belgian U-17 and U-19 teams. On October 7, 2011, he scored his first international goal against Kazakhstan.

During the 2014 ‘World Cup’ qualification campaign, he scored two goals in nine games, leading his side to the 2014 ‘FIFA World Cup,’ where they advanced to the quarterfinals before being eliminated. He was appointed the Belgian team’s captain for the 2016 UEFA Euro championships.

Eden Hazard’s pace, technical expertise, and offensive performance have earned him praise from coaches and the media. He has been likened to superstar footballers such as Lionel Messi and Cristiano Ronaldo, and is regarded as one of the best players in the world.
Hazard led Belgium to the 2018 FIFA World Cup in Russia as captain. Hazard was named the second best player of the 2018 ‘World Cup,’ winning the silver ball from the ‘FIFA Technical Study Group’ at the tournament’s conclusion (TSG).

Eden Hazard married Natacha Van Honacker, his longterm partner, in a private ceremony in 2012. They went to the same high school and met when he was 14 years old.
They began living together in Lille when Natacha completed her education. Yannis, Natacha’s first son, was born on December 19, 2010. In February 2013, the couple welcomed their second son, Leo, and another son, Samy, in September 2015.

Eden Hazard has a net worth of $100 million.

In Belgium, the United Kingdom, the Netherlands, and France, Eden Hazard appeared on the cover of the video game ‘FIFA 15’ alongside Lionel Messi. He was one of four players chosen as the new face of the FIFA 17 video game.