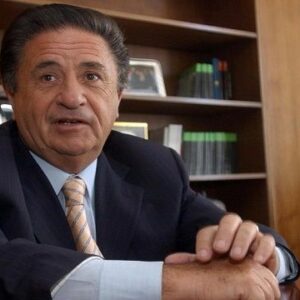 Eduardo Duhalde is an Argentine politician and attorney who served as the country’s president between 2002 and 2003. After completing his elementary education in Lomas de Zamora, he attended the University of Buenos Aires to study law. Initially, he was involved in academia and worked as a law professor at the National University of Lomas de Zamora. However, his political ambitions were evident as he simultaneously joined the Justicialist Party and became leader of the local section of the party shortly thereafter. His first political position was that of the mayor of Lomas de Zamora after winning the 1973 mayoral election, but he was removed three years later, along with many others, when the dictatorship began. After the fall of the dictatorship, he returned to politics and reentered the senate before regaining his position as mayor of Lomas de Zamora. He served as vice president of Argentina and subsequently as governor of Buenos Aires. He served as the interim president of Argentina for approximately 16 months beginning in 2002.

On October 5, 1941, Eduardo Duhalde was born in Lomas de Zamora, Greater Buenos Aires, to Don Tomas Gorostegui Duhalde and Mara Esther Maldonado.
Regarding his early life and formal education, very little information is accessible. 1970 marked his graduation from the University of Buenos Aires with a degree in law.

After completing his degree, he started working as a law professor at the National University of Lomas de Zamora. Approximately during the same period, he joined the Justicialist Party and became the leader of the local organization in Lomas de Zamora.

Eduardo Duhalde was elected mayor of Lomas de Zamora following the 1973 elections; however, his tenure as mayor was short-lived, since he was removed from office in 1976 following a military coup. Following the coup, he began a real estate firm.

As soon as the end of the dictatorship in Argentina was announced in 1983, Duhalde returned to politics. In the subsequent elections the same year, he was elected to parliament. Subsequently, he was elected as the mayor of Lomas de Zamora and in 1987 he became national deputy.

He forged a political partnership with Carlos Menem, and when Menem campaigned for president in 1989, Eduardo was appointed his running mate. Their union was successful, and Menem eventually became president, while he became vice president. He remained in his position for over two years.

During his tenure as vice president of Argentina, the then-president and Carlos Menem’s political friend gave him the opportunity to compete for governor of Buenos Aires. On 10 December 1991, he became governor, and he remained in office until 10 December 1999.

The Legislative Assembly of Argentina selected Dulhade as President of Argentina on January 2, 2002. The nation was in economic upheaval when he inherited the presidency, and during his brief 16-month term, he attempted to stabilize the situation. He abolished the fixed exchange rate for the peso against the U.S. dollar, which aided in the replacement of imports and helped revive the economy of the country during his presidency.

On May 25, 2003, Nestor Kirchner succeeded Dulhade. In 2009, Dulhade decided to run for president again and received the support of the Peronists’ conservative members.
He ran on the Union Popular ticket in the 2011 presidential election but lost to Cristina Kirchner.

During his 16-month tenure as President of Argentina, he enacted significant policy changes that contributed to the country’s long-term economic stability.

He has five children with his wife, Hilda Beatriz Gonzalez.