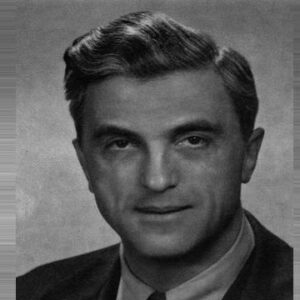 Edward Mills Purcell was an American physicist who was well known. In 1952, he shared the “Nobel Prize” for Physics with Felix Bloch, a Swiss physicist who mostly worked in the US. They were given the “Nobel Prize” for “coming up with new ways and methods for precise measurements of nuclear magnetic fields.” Purcell is known in the science world for finding nuclear magnetic resonance on his own. Nuclear magnetic resonance (NMR) is a technique that helps scientists figure out with great accuracy the chemical structure and properties of materials. NMR is also the basis for modern magnetic resonance imaging (MRI), which is used as a non-invasive diagnostic tool to make detailed pictures of organs and structures inside the body. Not only did Purcell make important contributions to physics, but he also made important contributions to astronomy. Biologists also remember him for his famous talk called “Life at Low Reynolds Number,” in which he explained the Scallop theorem. He was the first person to question particle physics’ CP symmetry. During his life, Purcell won many awards for his work in science, education, and public service. He advised U.S. Presidents Dwight D. Eisenhower, John F. Kennedy, and Lyndon B. Johnson on scientific matters.

E.M. Purcell was born in the U.S. city of Taylorville on August 30, 1912. Edward A. Purcell and Mary Elisabeth Mills, who raised him, were both born in Illinois.

He went to public schools in Taylorville and Mattoon, Illinois, for his education. In 1929, he enrolled at Purdue University.

He got his BSEE in electrical engineering from “Purdue University.” He then went to “Harvard University” for his M.A. and Ph.D. in physics.

During World War II, he lived in Massachusetts. After that, he went back to Harvard to do research.
Together with Robert Pound and Henry Torrey, he found out about nuclear magnetic resonance (NMR) in December 1946.

In 1952, when he found out about nuclear magnetic resonance, he won the “Nobel Prize” in physics.
Purcell also made important changes to the field of astronomy. He was the first scientist to find radio waves coming from neutral hydrogen in the galaxy. This let him see the spiral arms of the Milky Way for the first time. This observation led to the start of the field of radio astronomy.

His studies of spin-echo relaxation, nuclear magnetic relaxation, and negative spin temperature were all very important to the field of solid state physics (important in the development of the laser).

He was the first person, along with Norman F. Ramsey, to question the CP symmetry, which says that all particle forces are parity symmetric.
Purcell advised Presidents Dwight D. Eisenhower, John F. Kennedy, and Lyndon B. Johnson on scientific matters.

Purcell found that liquids and solids can have nuclear magnetic resonance. NMR is used a lot to learn about the molecular structure of pure materials and the make-up of mixtures.

In physics and chemistry, it is used a lot to figure out the chemical structure and properties of materials. Magnetic resonance imaging (MRI), which is one of the most important medical advances of the 20th century, is based on NMR.

He was the first person to find radio waves coming from neutral hydrogen in the galaxy. This was the well-known 21 cm line caused by hyperfine splitting. In modern astronomy, measurements of the 21 cm line are still an important tool.

Purcell wrote the innovative introductory book “Electricity and Magnetism,” which is still used today. The book, which was made possible by an NSF grant during the time of Sputnik and used relativity to explain the subject at this level, had a big impact. A whole generation of physicists learned from and were inspired by the book.

Purcell shared the 1952 Nobel Prize in physics with Felix Bloch, a Swiss physicist who was working at Stanford University at the time. This was for their work on NMR.
Purcell was a member of the Alpha Xi chapter of the Phi Kappa Sigma Fraternity while he was at Purdue University. Later, he was also put into the Fraternity’s Hall of Fame as the first Phi Kap to win a Nobel Prize.

In 1967, the “American Association of Physics Teachers” gave him the Oersted Medal.
In 1979, he was given the National Medal of Science and the Jansky Lectureship in front of the “National Radio Astronomy Observatory.”

He married Beth C. Busser in 1937. Dennis and Frank were their two sons.

Edward is one of the wealthiest and most well-known physicists. Wikipedia, Forbes, and Business Insider all say that Edward Mills Purcell has a net worth of about $1.5 million.