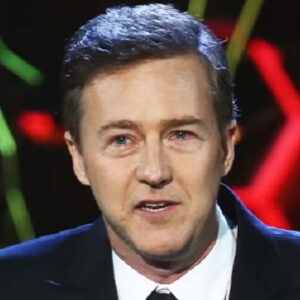 American actor and director Edward Norton is well-known for his parts in films including “Primal Fear,” “The Illusionist,” and “The Incredible Hulk.” Additionally, he was the director of the American romantic comedy “Keeping the Faith.” In the criminal thriller “Primal Fear,” where he played an altar boy accused of killing an archbishop, he made his acting debut. He received the Golden Globe Award in the same category as well as his first nomination for an Oscar in the category of “Best Supporting Actor” for the role. He received his second Oscar nomination for “Best Actor” two years later for his leading performance in the crime thriller movie “American History X.” He has appeared in numerous movies throughout the years, including “Red Dragon,” “The Illusionist,” “The Incredible Hulk,” and “Moonrise Kingdom.” His lead role in the black comedy “The Birdman” earned him his third Oscar nod. Norton is highly known for his environmental and social advocacy efforts in addition to his work in film. He was chosen to serve as the UN’s Goodwill Ambassador for Biodiversity in 2010. In a handful of his films, Norton has also worked as the producer.

On August 18, 1969, Edward Harrison Norton was born in Boston, Massachusetts, in the United States. His father, Edward Mower Norton Jr., was a marine lieutenant who served in Vietnam and then went on to practice law, promote environmental causes, and works as a federal prosecutor. His mother was a teacher of English named Lydia Robinson. Jim and Molly, two younger siblings of Norton, are also living.

Norton became interested in acting at a young age and performed extensively in high school plays. Later, he attended Yale University, where he received a history degree.

He next relocated to Japan, where he spent a few years working for his grandfather’s business, “Enterprise Foundation.” In 1994, he moved back to New York and made the decision to pursue an acting career.

Edward Norton made his film debut with a significant role in the 1996 murder thriller movie “Primal Fear” after performing in a number of Broadway musicals. The Gregory Hoblit-directed movie was a critical and financial triumph, making almost three times its budget. Norton’s performance earned him a nomination for the Best Supporting Actor Academy Award as well as a Golden Globe Award in the same category.

The next time audiences saw Norton was in Woody Allen’s musical comedy “Everyone Says I Love You.” Despite receiving favorable reviews from reviewers, the movie did poorly at the box office. Later, he appeared in “The People vs. Larry Flint” and “Rounders.” While the latter was a commercial triumph, the former was a flop.
In the 1998 crime drama film “American History X,” he portrayed the main character. For this role, he was nominated for an Oscar in the category of “Best Actor” for the second time.

He co-starred with Brad Pitt in David Fincher’s “Fight Club” in 1999. The movie was a financial hit. Despite initial criticism from critics, it eventually gained cult status. The romantic comedy “Keeping the Faith,” in which he also had a supporting role, marked his directorial debut the following year. The movie was a financial hit.
He had numerous cinematic appearances during the following few years, both in leading and supporting roles. These movies include “Red Dragon,” “Kingdom of Heaven,” “The Illusionist,” and “The Painted Veil,” among others (2006).

In the blockbuster movie “The Incredible Hulk,” Norton gained recognition for his portrayal of the Marvel superhero “The Hulk” and his alter ego Bruce Banner. The movie was a commercial success and earned largely positive reviews.
He starred in a number of popular movies in the 2010s, including “Leaves of Grass” (2010), “The Bourne Legacy” (2012), “The Grand Budapest Hotel” (2014), and “Birdman” (2014). He received his third Oscar nomination for “Best Supporting Actor” for his performance in “Birdman.” His most recent works include “Isle of Dogs” (2016) and “Collateral Beauty” (2016). (2018).

In the 1996 crime thriller “Primal Fear,” Edward Norton made his debut on the big screen. Gregory Hoblit was the director of the movie. Norton received his first Oscar nomination for the role he played as an altar boy who is accused of killing the archbishop. The movie was a box office hit and received numerous honors.

In David Fincher’s 1999 movie “Fight Club,” in which he played one of the lead roles, he was one of the primary characters. Brad Pitt, Meat Loaf, and Helena Bonham Carter were also featured in the movie. The movie was a commercial success and has developed a cult following over time. The 1996 Chuck Palahniuk novel of the same name served as the basis for David Fincher’s film, which he also directed.

The 2008 superhero movie “The Incredible Hulk” made Norton a household name worldwide. The movie, which was directed by Louis Leterrier, was based on the well-known Marvel comic character “The Hulk.” The protagonist of the tale was a scientist named Bruce Banner who participated in an experiment that turned him into the superhero “The Hulk.” The movie was a box office hit and received largely favorable reviews.

A Canadian film producer named Shauna Robertson is married to actor Edward Norton. 2013 saw the birth of their one son.
He serves as an honorary board member on the Columbia Center for Theatrical Arts’ Board of Directors and is a trustee for Enterprise Community Partners.

Norton is renowned for his environmental advocacy and backing of renewable energy initiatives. Additionally, he backs social initiatives including raising the standard of living for low-income individuals.

American actor and producer Edward Norton has a $300 million dollar fortune. He has also amassed a modest fortune outside the acting business—possibly more than he would have made from acting fees—as a result of exceptionally astute (and early) technological investments. This post will go into more information about these investments later.