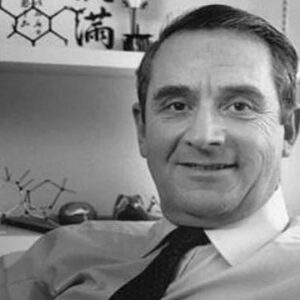 Elias James Corey is a well-known organic chemist from the United States. In 1990, he won the Nobel Prize in Chemistry for his work in developing the theory and methods of organic synthesis, especially retrosynthetic analysis. In his book, “The Logic of Chemical Synthesis,” he explains the idea of “retrosynthetic analysis,” which is a method of chemical synthesis that involves changing a target molecule into a structure that is easier to make. Through his constant research and development in science, which covers almost all areas of organic chemistry, he helped organic synthesis move forward in a big way. He also made a big difference in the fields of biochemistry and modern medicine. Because of this, a number of drugs like ginkgolide B and prostaglandins were made. Some of his most important scientific contributions are finding new ways to make things, using computer analysis to design chemical synthesis, and making a lot of complex bioactive compounds through chemical synthesis. Chemists were able to make better synthetic versions of organic chemicals with the help of Corey’s groundbreaking work. It also helped theorists understand how these chemicals work better. At Harvard University, he is currently the “Sheldon Emory Professor Emeritus.” In addition to the Nobel Prize, he won the “Linus Pauling Award” in 1973, the “Franklin Medal” in 1978, the “National Medal of Science” in 1988, and the “Priestley Medal” in 1999. (2004). Corey was put into the “Alpha Chi Sigma” Hall of Fame in 1998.

He was born in Methuen, Massachusetts, on July 12, 1928. His parents, Elias Corey and Fatina Hasham Corey were Christian Lebanese immigrants. After his father died when he was only 18 months old, his mother changed his name to Elias.

He grew up with his mother, his uncle, his aunt, his brother, and his two sisters in a big house. He went to a Catholic elementary school and then to Massachusetts’s Lawrence High School for high school. As a young boy, he liked sports a lot. He played football, and baseball, and went hiking.

Corey went to the Massachusetts Institute of Technology (MIT) in Cambridge, Massachusetts, when he was 16 years old. In 1948, he got a Bachelor of Science in Organic Chemistry.

Professor John C. Sheehan, a well-known American organic chemist, asked him to stay at MIT for his postgraduate doctoral studies, and he agreed. Under the direction of Professor Sheehan, he got his Ph.D. in Chemistry from the institute in 1951.

Since 1950, the Corey Group Lab, which has become a standard place for research and development in the field of modern synthetic organic chemistry, has come up with about 300 different ways to do things.

In 1951, the University of Illinois at Urbana-Champaign hired him to teach Organic Chemistry. His career moved forward at the university, and in 1956 he became a full Professor of Chemistry, a job he held until 1959. In 1952, he joined the university group Alpha Chi Sigma as a member of the Zeta Chapter.

During his time at the University of Illinois, he began studying how substances are made and how they are put together.
He came up with a number of new ways to make things. Pyridinium chlorochromate (PCC), which is also called the Corey-Suggs reagent, was one of them. It is used a lot to turn alcohol into the aldehydes and ketones that go with it.

He made important alcohol-protecting groups like methoxy ethoxy methyl (MEM), triisopropylsilyl ether (TIPS), and t-butyldimethylsilyl ether (TBS). This made it possible to make many natural products that don’t have the functional group compatibility to withstand normal chemical changes.

He also began a detailed study of cationic polyolefin cyclizations, which are used by enzymes to make cholesterol from simpler plant terpenes.
Corey-Fuchs alkyne synthesis, Corey-Winter olefination, Corey-Itsuno reduction, and Corey–Kim oxidation are all named after him.

In 1959, “Harvard University” made Corey a Professor of Chemistry. Since then, he has worked hard for the university for more than 50 years. He is a professor emeritus of organic chemistry at the moment, and the Corey Group research program he runs is still going strong.

He and the researchers on his team at the Corey group have done a lot of total syntheses. Some, like the ones they did on prostaglandins in 1969, are considered to be classics. Ecteinascidin 743, Salinosporamide A, Miroestrol, Ginkgolides A and B, Lactacystin, and Longifolene are some of the other important compounds that this group can make.

In 1965, he was the first person to use 1,3-Dithianes to change a carbonyl group in addition and displacement reagents temporarily.
He was chosen to be a “Foreign Member of the Royal Society” in 1998. (ForMemRS).

He has written more than 1100 papers that have been published in scientific journals with peer-review. In 2002, the “American Chemical Society” (ACS) named him the “Most Cited Author in Chemistry.” Also, in 2007, he was given the first “Cycle of Excellence High Impact Contributor Award” by the ACS Publications Division. Based on the impact of his research, the Hirsch Index (h-index) put him at the top of the list of chemists.

Some of his students went on to do great things, like K. C. Nicolaou, Ryoji Noyori, William L. Jorgensen, David E. Cane, and Phil Baran. But at one point, the suicide of one of his students, Jason Altom, caused a controversy that hurt his reputation.

Altom made it clear that Corey, his research advisor, was to blame for his death. Still, the American Foundation for Suicide Prevention (AFSP) pointed to the article in the New York Times about the incident as an example of bad reporting and said that Corey was unfairly made a scapegoat.

Up until 2008, 19 universities around the world, such as Cambridge University, Oxford University, and National Chung Cheng University in Taiwan, gave him an honorary degree.

Elias is one of the wealthiest chemists and is on the list of the most well-known chemists. Based on what we found on Wikipedia, Forbes, and Business Insider, Elias James Corey has a net worth of about $1.5 million.