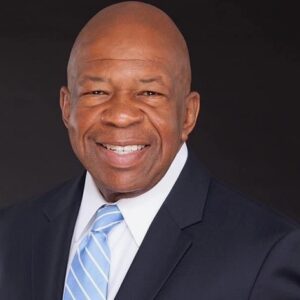 Elijah Cummings was an American politician, civil rights activist, and lifelong Democratic representative who served in the United States House of Representatives for 23 years, representing Maryland’s 7th congressional district. He is a law graduate who previously served in the Maryland House of Delegates for 13 years and practiced law for 19 years before entering politics. He was a member of the Congressional Progressive Caucus and served as chairman of the Maryland Legislative Black Caucus and the Congressional Black Caucus. He was the chair of the Committee on Oversight and Reform at the time of his death in October 2019, and he was conducting the impeachment investigation into President Donald Trump. He was at odds with President Trump over the latter’s racist remarks. He worked to lower prescription drug prices, combat addiction, enhance gun control, and overhaul the criminal justice system as a legislator.

Elijah Eugene Cummings was born in Baltimore, Maryland, on January 18, 1951, the third of seven children born to Ruth Elma and Robert Cummings, both of whom had previously worked as sharecroppers in South Carolina. His father worked at the Davidson Chemical Plant, while his mother, a homemaker, founded the Victory Prayer Chapel in Baltimore, which became a focal point for the local civil rights movement.

He graduated from Baltimore City College in 1969 and went on to Howard University in Washington, D.C., where he was a sophomore class president, student government treasurer, and eventually student government president. In 1973, he graduated with a bachelor’s degree in Political Science from the Phi Beta Kappa Society.

He studied law at the University of Maryland School of Law and was admitted to the Maryland bar later that year after getting his Juris Doctor degree. He began his legal career with Michael A. Christianson’s modest Baltimore company, Cummings and Dashiell, and then founded his own firm, Cummings and Dashiell.

Elijah Cummings served in the Maryland House of Delegates from 1983 to 1996 while still working as an attorney, following a successful campaign by his predecessor Lena King Lee to establish his political career. He advocated for a ban on inner-city billboard ads of alcohol and tobacco in Baltimore, which was the first such prohibition in a significant US city, in the Maryland General Assembly.

After only one term in Annapolis, he was voted chairman of the Maryland Legislative Black Caucus in 1984-85. He subsequently rose to the position of Speaker Pro Tempore, the second highest position in the Maryland House of Delegates, becoming the first African-American to hold that position in the state’s history.

After five-term Congressman Kweisi Mfume resigned to become president of the National Association for the Advancement of Colored People, he ran in a special election in Maryland’s 7th congressional district in February 1996. (NAACP). He won the twenty-seven-way Democratic primary in the black-majority district with 37.5 percent of the vote and defeated Republican challenger Kenneth Kondner in the election with 80.9 percent of the vote.

Months later, in November 1996, he won a seat in the United States House of Representatives in the official 1996 congressional election, defeating Kondner by a somewhat larger majority of 83.5 percent. Until his death, he went on to win 11 more elections.

He voted against a US military attack of Iraq in 2002, citing a lack of evidence that the country possessed weapons of mass destruction, which was ultimately proven to be false. Between January 2003 through January 2005, he was the chairman of the Congressional Black Caucus in the 108th United States Congress. He was lauded for asking to know if witness Mark McGwire, a professional baseball player, was “taking the Fifth,” i.e. avoiding self-incrimination, when he vaguely answered many questions at the 2008 congressional subcommittee hearings on steroids.

Cummings defeated Carolyn Maloney in the House Democratic Caucus with support from Nancy Pelosi in December 2010, after Edolphus Towns stepped down as the top Democrat on the House Oversight Committee despite his seniority.

On January 3, 2019, he was named chair of the Committee on Oversight and Reform, a position he held until his death in October of that year. He presided over the public testimony of Michael Cohen, President Trump’s former lawyer, and also supervised the impeachment investigation into the latter.

Elijah Cummings’ first marriage was to Joyce Matthews, with whom he had a daughter called Jennifer J. Cummings, but they had been separated since 1982, according to a 1999 report in the ‘Baltimore Sun.’ According to the story, he had a 16-year-old son and a four-year-old daughter, Adia Cummings, from previous unmarried relationships, and was facing financial difficulties due to child support, taxes, and a mortgage. He kept his son, who lived with his mother in Baltimore, a secret for a long time, although he frequently referenced his youngest daughter in speeches and eventually posed for images with his two children.

Maya Michelle Rockeymoore, who owns the consultancy firm Global Policy Solutions and previously worked as Chief of Staff for former Congressman Charles Rangel, married him for the second time in 2009.

Cummings rose to prominence in April 2015 after giving a moving eulogy at the burial of 25-year-old African-American Freddie Gray, who died in police custody, and later urging protesters to follow curfew and refrain from violence. He was diagnosed with thymic carcinoma, a rare kind of thymus gland cancer, in 1994 and had to undergo major surgery in 1997; nonetheless, he never fully recovered. He needed cardiac surgery to repair his aortic valve in May 2017, after which he suffered a surgery-related illness and was hospitalized again for a knee infection later that year.

While he had been absent from crucial political events since early September 2019 and required assistance to get around, the fact that he was in hospice care was not made public. On October 17, 2019, he died at Johns Hopkins Hospital from “complications related to long-standing health difficulties,” and he was laid to rest before his funeral on October 25 at the New Psalmist Baptist Church in Baltimore.

Elijah Cummings’s estimated net worth is about $1.3 million.

Elijah Cummings was only 11 years old when he marched to the Riverside Park Pool in South Baltimore with two dozen other youngsters in an attempt to integrate the segregated public pool. Despite the police barricade, a mob of enraged white people attacked them with bottles and rocks, injuring his eyebrow and leaving it scarred for life.

When he was in elementary school, a counselor informed him that he would never be able to pursue his dream of being a lawyer because he was too sluggish and talked poorly. Following the incident, he became so driven that he not only became a successful lawyer, but also a well-known orator at the statehouse.