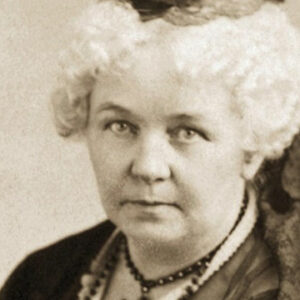 Elizabeth Cady Stanton was a well-known American civil right and women’s rights campaigner in the 19th century. She was raised in a highly liberal household where talking about the law was commonplace. Her early experience with the legal system made her realize how severely the law discriminates against women, especially married women who essentially lack any property, money, work, or even parental rights. She made the decision to fight for women’s rights, and as she grew older, she persistently promoted the right of women to vote. Susan B. Anthony was her campaigning companion, and together they had a major influence on the 19th-century women’s movement. After establishing the National Women’s Loyal League, Elizabeth and Susan eventually went on to found the National Woman Suffrage Association. In her later years, she became the most renowned voice of the female reformers, speaking out openly in favor of reproductive autonomy and liberal divorce laws. The most significant reform she brought about as a result of her persistent work was the Nineteenth Amendment, which gave everyone the right to vote. She was an activist, a writer, and maybe the most well-known female leader America has ever had.

On November 12, 1815, Elizabeth Cady Stanton was born in Johnstown, New York. Her father, Daniel Cady, was a well-known attorney who served as a legislator and a judge on the New York Supreme Court. Her mother came from a rich family as well. Elizabeth had ten siblings, although only a few of them lived to adulthood.

She acquired her early education at the Johnstown Academy, and from 1830 to 1833, she attended Emma Willard’s Troy Female Seminary. There, she pursued her studies in science, math, theology, Latin, Greek, and French.

She supported women’s rights causes, and since her father was a lawyer, she was familiar with the legal obstacles to women’s equality. The way husbands used to treat, dominate, and control their wives’ lives and property angered her to the core.

After getting married, Elizabeth Cady Stanton relocated back to New York in 1847 and made an effort to devote all of her time to become a wife and mother. She quickly became an abolitionist and a woman’s rights campaigner, though, after becoming bored.

She quickly made friends with other like-minded women and vowed to devote the remainder of her life to advancing the rights of women to vote, gender-neutral divorce laws, and better economic opportunities for women.

She and three other women organized the first-ever women’s rights convention in Seneca Falls on July 19 and 20, 1848. She also penned the Declaration of Sentiments, which was modeled after the Declaration of Independence, to proclaim women’s equality with men and to advocate for women’s suffrage.

As a result of the success of the conference, she was invited to talk about women’s rights at the National Women’s Rights Convention in Worcester, Massachusetts, in 1850.

She made friends with prominent feminist Susan B. Anthony in 1851, and the two of them worked to form the Woman’s State Temperance Society, which was eventually abolished after only a year. Soon after, Susan and Elizabeth began concentrating on women’s suffrage.

They established the Woman’s National Loyal League in 1863 in favor of the Thirteenth Amendment, which outlawed slavery. They both advocated for the constitutional amendment granting Americans the right to vote in all elections.

Matilda Joslyn Gage, Susan, and Elizabeth launched the National Woman Suffrage Association in 1869. Elizabeth joined the New York Lyceum Bureau that same year, and she soon began traveling and giving lectures for around eight months of the year until 1880.

She gave one of her most well-known and well-remembered addresses, titled “Our Girls,” in 1880 about the socialization and education of young girls. She aimed to promote the ideas of gender equality through her speech.
She stopped giving lectures in 1880 and began spending all of her time writing and traveling. Together with Susan, she started writing, and in 1881 and 1882, respectively, the two volumes of her “History of Woman Suffrage” were released.

She co-authored “The Women’s Bible” with Gage, which was released in 1895. Here, she applied a feminist interpretation to the text.

An important person in the early women’s rights movement was Elizabeth Cady Stanton. She campaigned tenaciously for equal rights for women throughout her life, including the right to vote, parenting and custody rights, and property rights. Her efforts led to the 1920 passage of the Nineteenth Amendment to the United States Constitution, which granted women the right to vote.

Elizabeth married Henry Brewster Stanton, a journalist and antislavery orator, in 1840. The couple has seven kids together.

On October 26, 1902, Elizabeth Cady Stanton passed away at her daughter’s house in New York City as a result of a heart attack.

The estimated net worth of Elizabeth Cady Stanton is unknown.

Elizabeth’s siblings had all passed away at young ages. Her father was saddened when Eleazar Cady, the only brother still alive, passed away at the age of 20. He told her, “Oh, my daughter, I wish you were a male,” as she went to comfort him. Elizabeth was inspired by her father’s remark to achieve parity with men, and she worked tirelessly to please him by outperforming them in all areas that were often reserved for men.

She was a strong feminist, and her marriage reflected this when she maintained that she would not “obey” her husband because they were entering a partnership in which they would be on equal footing. She even resisted adopting Mrs. Henry B. Stanton as her new identity and continued to use her maiden name.