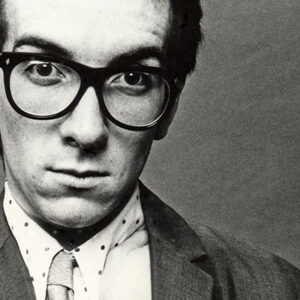 Declan Patrick MacManus, better known as Elvis Costello, is an English pop singer and songwriter. He is regarded as a member of the New Wave movement. He’s also a creative songwriter noted for his extensive lyrical language, which is uncommon among pop songwriters. His work spans a wide range of musical genres, and he enjoys mixing and matching genres to create music with a distinct vibe. It’s no wonder that music is his love; his father was a musician, so it’s in his blood. The father-son team had even collaborated on a television advertisement and won a trophy for it. When he first started performing professionally, he used the stage name Elvis Costello. The talented young artist obtained a deal with Stiff Records, an independent label, and published his debut album, ‘My Aim is True.’ The record was a moderate economic success, but it gave the world a glimpse of his potential. The Attractions, which he created with bassist Bruce Thomas, drummer Pete Thomas, and pianist Steve Nieve, became his supporting band. He was at the height of his fame in the late 1970s, when all of his albums were certified Gold or Platinum. Despite his lack of commercial success in the 1980s, he has amassed a passionate cult following.

Ross MacManus and Lilian Alda had Elvis Costello. His father was a member of the Joe Loss Orchestra.
He went to Hounslow Secondary Modern. He and his father appeared in an award-winning television advertisement for R. White’s Lemonade. As an adolescent, he relocated to Liverpool with his mother.
After graduating from St. Francis Xavier’s College, he returned to London.

The career of Elvis Costello

In 1974, he established ‘Flip City’ with Mich Kent and Malcolm Dennis. The band failed and disbanded the next year.
To support his family, Costello did solo shows and odd jobs. In his spare time, he wrote songs and made demo tapes to send to record labels.

In 1976, he sent a demo cassette to Stiff Records after seeing an ad soliciting sample tapes. Nick Lowe of Stiff Records signed the talented singer to a deal. During this period, he took the stage name Elvis Costello.
‘My Aim is True’ was released in 1977. Nick Lowe produced it with Clover members providing the backing music. The album sold well.

He established The Attractions with Steve Nieve, Bruce Thomas, and Pete Thomas in late 1977. His debut album with them was ‘This Year’s Model’ in 1978.

‘Armed Forces’ came out in 1979. Reviewers appreciated the album’s creative and quick lyrics. ‘Accidents will happen’ and ‘Alison’ were included. His prior albums’ popularity encouraged him to release one album every year. His 1980 album ‘Get Happy!’ has elements of R&B and soul music.
He released ‘Trust’ in 1981. His caustic attitude was reflected in the album’s lyrics. It was his first album to have the lowest sales.

His debut album, ‘My Aim is True’ (1977), was a smash hit, hailed as the greatest debut album in pop music history. U.S. Platinum and Gold in Canada. His 1979 album Armed Forces was voted one of the finest albums by Rolling Stone. Platinum in the UK and Canada. The album was so successful that it was reprinted again, in 1993 and 2001.

He has won two Q Merit Awards (2001 and 2002) from the UK music magazine Q.
He’s been nominated for multiple Grammys.

He married Mary Burgoyne in 1974 and they have a son. The marriage failed.
In 1986, he married Cait O’Riordan. This marriage ended in divorce in 2002.
He married Diana Krall in 2003. He and she have twins.
He became a vegetarian in the 1980s.
He is a member of the Jazz Foundation of America, a non-profit organization that assists jazz musicians in need.

Elvis Costello, OBE, is a singer-songwriter from England with a net worth of $70 million USD. Costello is best known for being the frontman of the band Elvis Costello and the Attractions, as well as a solo artist. When his debut album, “My Aim is True,” was released in 1977, it received critical acclaim. Following that album, he established the Attractions, a supporting band that toured for nearly a decade before disbanding in 1986. “Alison” (1977), “Watching the Detectives” (1977), “Pump It Up” (1978), “Everyday I Write the Book” (1983), and “Veronica” (1983) are just a few of Elvis’s long-running hits (1989).

He was inducted into the Rock and Roll Hall of Fame in 2003 with The Attractions.
He’s had minor appearances in films, typically as himself.
He is a huge Liverpool fan.