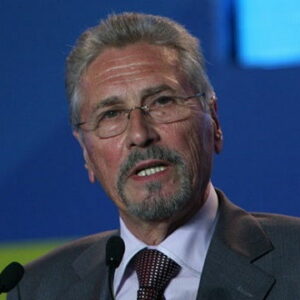 Emil Constantinescu is a Romanian politician who previously served as the country’s President from 1996 to 2000. He rose to prominence in politics in the late 1980s as a result of the 1989 Romanian Revolution. He was a co-founder and vice president of the Civic Alliance, and also served as acting chairman of the Romanian Anti-Totalitarian Forum, which later became the Romanian Democratic Convention (CDR). He was elected President in 1996, following the CDR’s victory in the 1996 parliamentary elections. Constantinescu is a professor by profession and holds doctorates in geology and geography, as well as a law degree. He became interested in politics during his highly successful academic career because he desired to play an active role in bringing about positive change in the country. In 1965, he joined the Romanian Communist Party (PCR). He was elected president (rector) of the University of Bucharest following the fall of the communist regime and became the CDR’s candidate for Romanian president. He was defeated in the 1992 elections by Ion Iliescu, a prominent Romanian Revolution figure. He remained active in politics and was elected President of Romania in 1996.

Emil Constantinescu was born in Tighina, Kingdom of Romania, on 19 November 1939. His father was an engineer specializing in agronomy.
He attended high school in Pitesti and enrolled in the University of Bucharest’s Faculty of Law in 1956. He earned a degree in legal sciences in 1960 and began his career as a junior judge at the Pitesti District Court.

He later changed his mind about his profession and enrolled at the University of Bucharest’s Faculty of Geology – Geography in 1961. He earned a degree in geology in 1966. He developed an interest in politics during his studies and joined the Romanian Communist Party (PCR) in 1965.

In 1966, he began a lengthy academic career. He was appointed assistant professor at the University of Bucharest’s Faculty of Geology.

He earned a doctorate in geology and geography in 1979. He progressed through the university’s ranks over the years, eventually becoming an associate professor in 1990. In 1991, he was appointed professor of mineralogy.

His political involvement grew significantly during the 1989 Romanian Revolution. Emil Constantinescu collaborated with other intellectuals to work toward the country’s democratization and establishment of a civil society following the fall of the communist government.

In May 1990, he took part in a 42-day meeting in Bucharest’s University Square that culminated in the establishment of the association “University Solidarity.” In the same year, he was instrumental in establishing the Civic Alliance, a significant non-governmental organization dedicated to the consolidation of civil society.

He was elected pro-rector and rector of the University of Bucharest in 1990 and 1992, respectively, a position he held until 1996. He also served as president of the Romanian National Council of University Presidents during this time period (1992 – 1996).

The Civic Alliance and University Solidarity joined forces with other civic organizations and democratic parties in the early 1990s to form the Democrat Convention of Romania (CDR) in 1991.

In 1992, the CDR elected him president. He ran for President of the CDR in the 1992 elections but was defeated by incumbent Ion Iliescu, who had been appointed acting President following the Romanian Revolution.

CDR fought for years to bolster the democratic opposition and its governance program. Emil Constantinescu initiated and signed the “Contract with Romania” as the convention’s leader.

Even though President Ion Iliescu began his term with overwhelming public support, he was unable to bring the citizens’ desired economic and political stability. The Democratic Convention won the 1996 elections, and Constantinescu was elected President of Romania.

He was inaugurated on 29 November 1996. Several sectors, including justice and administration, underwent significant reform during his tenure. Privatization and an acceleration of industrialization were among the economic reforms.

He effected a number of positive changes in the judiciary. The Local Government Law and the Criminal Code have been updated, and the Law on the Restitution of Agricultural Lands and Forests Confiscated by the Communist Regime has been adopted.

As President, he also emphasized the importance of developing strong foreign relations with other nations. He co-founded “the Romania-US Strategic Partnership” with US President Bill Clinton. He also bolstered bilateral cooperation with other countries.

He resumed his academic career following the conclusion of his presidential term on 20 December 2000. He remains active in politics and works with a number of non-governmental organizations (NGOs) both in Romania and abroad. He is also the president of the Association of Citizenship Education and the Romanian Foundation for Democracy, and a member of the World Justice Project’s Board of Directors.

Under Constantinescu’s presidency, the CDR government implemented several positive changes in Romania, but his accomplishments were overshadowed by an economic recession. He is credited with putting an end to the Mineriads—successful violent interventions by miners in Bucharest—and with implementing the economic reforms that resulted in Romania’s first significant foreign investment.

In 1998, the Institute for East-West Studies in New York named him European Statesman of the Year.

In 1998, he was presented with the International Democracy Medal by the Washington-based Center for Democracy.

In 2000, the Croatian government bestowed upon him the Grand Order of King Tomislav for his “outstanding contribution to the promotion of friendship and the development of mutual cooperation between the Republics of Romania and Croatia.”

In 2013, he was presented with the Institute for Cultural Diplomacy’s Lifetime Achievement Award in Berlin.

Emil Constantinescu is one of the wealthiest politicians and is ranked among the most popular. Emil Constantinescu’s net worth is estimated to be around $1 million, based on our analysis of Wikipedia, Forbes, and Business Insider.