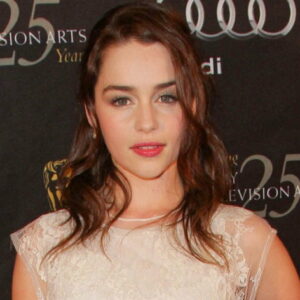 Emilia Clarke is a British actress who is best known for her part in HBO’s ‘Game of Thrones.’ She was introduced to the world of acting at a young age as the daughter of a theatre sound engineer. She attended the Drama Centre in London and performed in a number of theater shows, including ‘Breakfast at Tiffany’s.’ She made her television debut with a guest part in an episode of the English soap series ‘Doctors’. She went on to star as Daenerys Targaryen in the fantasy series “Game of Thrones,” for which she received numerous honors and nominations. Clarke has dabbled in acting, starring in films such as ‘Terminator Genisys,’ ‘Me Before You,’ and ‘Voice from the Stone.’ She’ll be included in the next Star Wars anthology ‘Solo: A Star Wars Story.’ Clarke was dubbed ‘Esquire’s Sexiest Woman Alive’ in 2015 after being voted ‘the most desirable woman in the world’ by AskMen readers. She is a strong and independent woman who is a fervent advocate of feminism, in addition to being gorgeous and brilliant. The English actress wrote an op-ed for ‘HuffPost UK’ on International Women’s Day 2017, expressing her views on feminism and gender equality.

Emilia Clarke’s early playing credits include two St. Edwards stage plays and 10 plays at the Drama Centre London. Her first television appearances were in an episode of the soap opera ‘Doctors’ and the television movie ‘Triassic Attack.’ The actress landed the role of Daenerys Targaryen in HBO’s fantasy series “Game of Thrones” in 2011. Her performance was well-received, and she was nominated for an EWwy Award for Best Supporting Actress in a Drama in 2011.

She starred in the films ‘Spike Island’ and ‘Shackled’ in 2012. She went on to play Evelyn Hemingway in the comedy-crime drama film ‘Dom Hemingway’ shortly after. The next year, Clarke starred in the American science fiction film ‘Terminator Genisys.’ Despite receiving terrible reviews, the film was a commercial success. The critics lauded her performance.

In 2016, she appeared in the film ‘Me Before You.’ The movie was a huge success. In the same year, she also voiced Bridget in an episode of ‘Robot Chicken.’ In 2017, she starred in the film ‘Voice from the Stone.’ She also did voice work for two episodes of the animated programs ‘Animals’ and ‘Thunderbirds Are Go’ in the same year. Clarke will soon be featured in the next film ‘Solo: A Star Wars Story’ as Qi’ra.

Emilia Isabelle Euphemia Rose Clarke was born on October 23, 1986, in London, England, to Jennifer Clarke and her husband. Her mother is the director of The Anima Foundation, a charity organization, and her father (who died on July 10, 2016) worked as a theatre sound engineer.
Clarke attended St. Antony’s School in Rye and St. Edward’s School in St. Edward’s. In 2009, she received her diploma from the Drama Centre London.

When it comes to the actress’ personal life, she dated filmmaker and comedian Seth MacFarlane for roughly six months before calling it quits. Despite their split, Clarke maintains friendship with MacFarlane. She has a large mansion in California that she bought in 2016.

Emilia Clark is an English actress who has a net worth of $20 million.