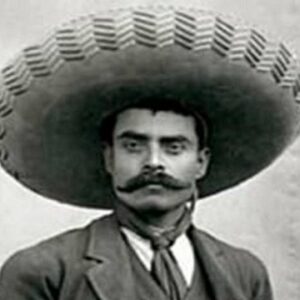 Emiliano Zapata was a Mexican revolutionary and one of the most influential individuals during the Mexican Revolution, which lasted from 1910 to 1920. He was the commander of the ‘Southern Liberation Army,’ which he had organized to fight guerilla fights against tyrannical governments’ troops on a regular basis. His supporters, known as ‘Zapatistas,’ were peasants and farmers who tilled their land with rifles slung over their shoulders, fought when called upon, and returned to farming once the conflict was finished. He was committed to agrarian reform and to forming a government that would return the land usurped by landowners and plantation owners to the country’s peasants and farmers. He was known for devising the ‘Plan of Ayala,’ which aimed to assist farmers and peasants in reclaiming their land. However, during his lifetime, his plan failed since he was slain by members of the opposing forces. After his death, ‘Zapatista’ generals deposed Venustiano Carranza, founded a government, and implemented the land reforms promised by Zapata.

Emiliano Zapata was born as Emiliano Zapata Salazar on August 8, 1879 in Anenecuilco, Morelos, Mexico.
He was the son of Gabriel Zapata, a well-known’mestizo’ peasant who trained and sold horses to people. His mother was Cleofas Jertrudiz Salazar.

He obtained fundamental schooling including book-keeping from his teacher Emilio Vara.
His mother died when he was 16 years old and his father died 11 months later, following which he had to look after his family.

In 1897, he was detained for participating in a protest gathering against the plantation owner who had taken their farmland.

After being pardoned, Emiliano Zapata again started agitating and was soon enlisted into the Mexican Army to stop him from agitating any longer.

After barely six months in the Army, he was dismissed and transferred to Porfirio Diaz’s son-in-law’s ranch asa horse-trainer.

In 1909 the villagers ofAnenecuilcoelected him as president of the village council board and he quickly became involved in the agitations carried out by the local peasants and farmers against the landowners.

Once an entire hamlet was burnt to the ground by the irate landowners because the residents had forcibly occupied a piece of land.

Zapata continued with his struggles and sometimes he was successful in obtaining the land back for the villagers by using extremely ancient title deeds to petition the governor to assist return sections of land to their original owners.

Sometimes he got agitated by the tardy response of the government and forcibly occupied pieces of land he felt fit and handed them to the peasants and farmers.

During this period, the president of Mexico was Porfirio Diaz who had defeated a northern landowner called Francisco Madero in the 1910 presidential election. Francisco went to the United States, announced himself as the real President, returned to Mexico, and lay claim to the presidency sparking a fight between the two.

Seeing a tremendous chance for land reforms, Zapata established a secret partnership with Francisco Madero who vowed to carry out the reforms.

In 1910 Zapata became the commanding general of the ‘Ejercito Libertadordel Sur’ or the ‘Liberation Army of the South and declared war against President Diaz.

In May 1911, the Zapata’ssmall army of guerillas beat the forces of President Diaz and captured the city of Cuautla after a terrible six-day fight and closed the road to the capital Mexico City.

A week after being beaten by Pancho Villa and Pascual Orozco at the ‘First Battle of Ciudad Juarez’, President Diaz resigned and fled to Europe after turning over control to a provisional president.

Zapata and his force of 5,000 guerillas took captured Cuernavaca, the capital of the state of Morelos.
Zapata flew to Mexico City to force the interim president to return the illegally occupied land to the farmers where he met the jubilant Francisco Madero.

But when Zapata begged for Francisco’s help in restoring the land, Madero ordered him to disarm his guerillas first before the work could be done.

Zapata started disarming his guerillas but when he found that Madero had deployed the army to quash any protests to disarm, he stopped the process immediately which deteriorated their relations by the summer of 1911.

After being refused by Zapata, Madero nominated a governor in November 1911 who sided with the landlords instead of helping the farmers gain back their land which enraged Zapata further.

Many attempts were made to find a peaceful solution to the matter but nothing succeeded and when Francisco Madero declared himself the president of Mexico, Zapata, and his followers took sanctuary in the hills of southwest Puebla.

After the disenchantment with Madero, Zapata began onto a strategy known as ‘Plan of Ayala’ that proclaimed Madero as a traitor and incapable of delivering any of his pledges given before the revolution.

This time around Madero becameZapata’s target instead of Diaz. According to ‘Plan of Ayala’, a provisional president will be appointed till elections are carried out. The elected president would then return at least one-third of the plundered land to their rightful owners.

If any landowner refused to part with his land then it would be occupied by force if necessary. The motto raised by Zapata was ‘Tierra y Libertad’ or ‘Land and Liberty.

As the revolution continued, General Victoriano Huerta killed Francisco Madero in February 1913 and established himself as the president of Mexico. He asked Zapata to merge the forces of both sides into one unified army which was denied by Zapata.

Huerta’s attempt to meet and defeat the ‘Constitutionalist Army’ led by Venustiano Carranza, Pancho Villa, and Alvaro Obregon in Northern Mexico was thus stymied and he was forced to abandon the nation in July 1914 after being defeated by his four opponents.

After Huerta withdrew, Zapata invited Carranza’s ‘Constitutionalists’ to embrace the ‘Plan of Ayala’ with a threat that as long as it was not executed in full would remain independent.

In October 1914 Carranza called all the leaders to gather to Mexico City for a meeting. Pancho Villa refused to attend citing that Mexico City was hostile territory.

The convention was transferred to Aguascalientes where everybody including the ‘Villistas’ and ‘Zapatistas’ came and chose General Eulalio Gutierrez as the provisional president. This idea was rejected by Carranza and he transferred the government to Veracruz.

Zapata restored Morelos during 1915 by allocating hacienda land to the farmers who made the area affluent by farming grain, beans, and vegetables. When the battle broke out between the moderate ‘Carrancistas’ and the revolutionary ‘Conventionalists’, Zapata ordered his army to take over Mexico City.

Zapata and Villa reunited outside the city two weeks later and agreed at the National Palace to fight together till the election of a new president. Villa accepted the ‘Plan of Ayala’ during this meeting.

In April 1915 U.S. president Woodrow Wilson sent his representative to see Zapata. When Zapata urged Wilson to send a delegation in response, Woodrow declined as he had already recognized Carranza’s government.

The war dragged on with Zapata winning more battles and occupying the city of Puebla. He was finally isolated when Carranza’s army beat Villa in 1917. Carranza called for a constitutional conference without inviting Zapata where he was chosen as the president of Mexico.

During this time William Gates, the new U.S. envoy to Mexico met Zapata, went back to the U.S., and published a series of articles extolling the agrarian reforms launched by Zapata which brought him immense happiness and tranquility.
Sometime thereafter General Pablo Gonzalez sent Colonel Jesus Guajardo to Zapata’s camp disguised as a revolutionary and set up a secret rendezvous with Zapata at a Chinameca property in Morelos.

When he got to the conference on April 10, 1919, Zapata was attacked and killed by ‘Carrancista’ soldiers and his body was shown to the public for 24 hours and buried in Cuautla.

Emiliano Zapata married Josefa Espejo in 1911 and had a daughter named Paulina Ana Maria.
He also had six boys Mateo, Juan, Nicolas, Felipe Diego, and Ponciano, and four daughters Elena, Josefa, Carlota, and Margarita who were born out of wedlock.

He has affected the history of Mexico and his life has been depicted through movies, novels, comics, clothes, and music.

Emiliano is one of the richest War heroes & featured on the most popular War heroes. According to our analysis, Wikipedia, Forbes & Business Insider, Emiliano Zapata’s net worth is roughly $1.5 Million.

Emiliano Zapata was known as ‘El Tigre del Sur’ or ‘The Tiger of the South’.