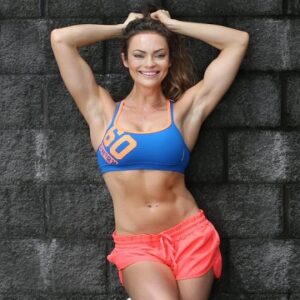 Emily Skye’s athletic physique is a mix of everything healthy and perfect; one look at her and you’d think she’s a health idol. Emily Skye has seen and braved it all, from being an insecure adolescent struggling with depression and an unhealthy lifestyle to taking up traditional modeling to find her sense of self-worth and subsequently giving it all up to focus on health and fitness to better her quality of life. Skye’s sole goal when she began professional modeling was to improve her self-esteem. However, as her health began to deteriorate, she understood that feeling well was more important than looking ideal or small. Her unhealthy diet and lack of exercise gave way to a more devoted way of life, which saw her adopt a healthier lifestyle. Skye switched from being a gym cardio girl to focusing on physical and weight training. Her commitment to fitness is admirable and noteworthy, and she has become an inspiration to many. Skye is an online personal trainer that advises people on how to live a healthy lifestyle. Her extraordinary story of transformation is both inspiring and motivating.

Emily Skye’s road to becoming a fitness icon is inspiring for someone who claims to have been “lost” in life throughout her adolescent years.

Skye was completely lost in her early life until finding consolation in modeling. She is now a wellness consultant and advocates for healthy living.

Although her career provided her with a sense of self-worth and dignity, insecurities, melancholy, and unhealthy living continued to plague her mind and body.

It wasn’t until her health began to deteriorate that Skye recognized that appearing flawless wouldn’t help her; feeling well was more essential. Skye was motivated by this insight to begin her fitness and wellness journey.

She began exercising instead of modeling, adopting a better lifestyle as a result. She went into fitness modeling and subsequently became a personal trainer after studying physical training.

Her adoption of weight training was aided by the advantages of strength training. Emily’s body, as well as her quality of life, transformed as a result of her new way of life.

Her online personal training sessions are quite popular and encourage people to live a healthy lifestyle.

Emily Skye was born in Australia on January 7, 1985. Her father abandoned her mother when she was just two years old. Skye had a lot of insecurities as a child because she was raised only by her mother. She lacked self-esteem and was adrift in life, unsure of what she should do.

She had always believed she was unfit for anything and, as a result, she attempted a variety of jobs before settling on modeling. Skye used to pose for popular magazines in Australia when she was younger.

Her self-esteem grew as a result of the assignments. Skye, on the other hand, had previously been a skeptic of the advantages of being fit and healthy.

Despite her athletic appearance, she was insecure, melancholy, sickly, and generally unhappy. Skye’s life took a turn when she learned that, while walking on the ramp made her happy, it had a negative effect on her life.

She was more concerned with ‘looking flawless’ than with ‘feeling well.’ Her path to becoming a fitness model icon is both inspiring and motivating.

She has not only changed her life’s motto but has also changed the lives of others who are linked with her.

In 2022, Emily Skye’s net worth is estimated to be $36 million. She is an Australian fitness model, YouTuber, and social media sensation.