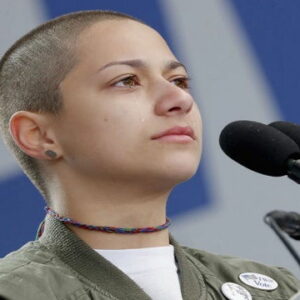 Famous American gun control campaigner Emma Gonzalez. She survived the massacre at Stoneman Douglas High School in Parkland, Florida in February 2018, which left 17 people dead and a number of others with life-threatening injuries. Gonzalez in reaction co-founded the pro-gun control organization Never Again MSD. She gained notoriety when a video of her passionate speech at a rally against gun violence in which she used the slogan “We call B.S.” went viral. Since then, she has appeared in a number of high-profile media interviews and even helped to plan the ‘March for Our Lives’ anti-gun violence rally, which grew to be the biggest student protest in American history. She was referred to as “the face of the #NeverAgain Movement” and “a recognizable figure” by Glamour Magazine and “La nueva cara of Florida” by The Washington Post, who also likened her to the revolutionary Jose Marti. She was dubbed “one of the most visible student activists to emerge from the shooting” by NBC News.

Jose Gonzalez, a cybersecurity lawyer who moved to New York City from Cuba in 1968, and Beth Gonzalez, a math tutor, had Emma Gonzalez in 2000. Gonzalez has two older siblings and was reared in Parkland, Florida.
In the spring of 2018, she is anticipated to graduate from Marjory Stoneman Douglas High School. Gonzalez leads the “gay-straight alliance” at her school as its president. On “Project Aquila,” a student project that planned to launch a weather balloon “to the edge of space,” she oversaw the tracking team. David Hogg, one of her fellow students, recorded the entire endeavor. Her favorite topics are astronomy and creative writing, while mathematics is her least favorite.

On February 14, 2018, a shooter opened fire inside her school, leaving seventeen people dead and numerous others injured. When the fire alarm went out, Emma and many other students ran inside the auditorium. She tried to leave down the hallway but was advised to duck for cover. She sought sanctuary in the auditorium and was kept there for two hours until police began releasing the pupils.

Emma Gonzalez spoke for 11 minutes during a pro-gun control rally on February 17, 2018, in front of the Broward County Courthouse in Fort Lauderdale, Florida. She delivered her address in response to the tragic events that occurred at Stoneman Douglas High School just three days before. In response to gun legislation, she made a call and response in her speech that quickly went viral: “We call B.S.” Her speech, according to “The Washington Post,” came to represent the “new strain of furious activism” that emerged soon following the shootings.

She and other survivors discussed the urgent need for gun regulation with Florida state legislators in Tallahassee on February 20, 2018. Gonzalez and her classmates observed as the legislature rejected a bill that would have restricted access to firearms.

Gonzalez and her fellow students denounced the NRA and politicians who accept donations from them for their complicity in the massacres on February 21, 2018, at a town hall organized by CNN that was broadcast worldwide. Gonzalez prodded NRA official Dana Loesch to respond to her inquiries at the town hall when the latter was being evasive.

Gonzalez said in an interview with Ellen DeGeneres on February 23, 2018, that she developed the term “We call B.S.” because she believed that repetition would help her message stick.

Emma Gonzalez started using Twitter soon after giving a speech that went viral and making prominent media appearances. In less than 10 days, she attracted more than a million new followers.

Gonzalez was the subject of the March 2018 cover story of Time Magazine. Along with Alex Wind, David Hogg, Cameron Kasky, and Jaclyn Corin, she was highlighted. In the same month, “France 24” did a profile on her.

Gonzalez led the nationwide “March for Our Lives” demonstration on March 24, 2018, alongside other students, including fellow Parkland survivors David Hogg, Cameron Kasky, and Sarah Chadwick. The Parkland shooting lasted six minutes, which is how long she spoke. By repeating the names of the victims and the things they would never be able to do or cherish again, she also paid tribute to them. During the march, she urged viewers to “empathize rather than sense apathy” and to vote for change in an interview with MSNBC.

The political right wing of American politics and the media have consistently attacked and condemned Emma Gonzalez and her fellow students for their activism. She was referred to as a “skinhead lesbian” by Leslie Gibson, a Republican who is running unopposed for the Maine assembly and a lifelong NRA member. He was ultimately compelled to withdraw from the Maine legislature election.

Gonzalez and her fellow protesters have been wrongly accused of being “crisis actors” by conspiracy theorists. After her widely reported speech at the “March for Our Lives” demonstration, doctored images of her tearing up a copy of the US Constitution quickly went viral online. Republican congressman Steve King also chastised her for donning a Cuban flag patch on her jacket during her remarks.

Emma Gonzalez and her fellow students’ persistent protests and activism in support of increased school safety led to the Florida Legislature passing a measure with the name “Marjory Stoneman Douglas High School Public Safety Act” in March 2018. The bill increased the legal age to purchase a firearm from 18 to 21, instituted waiting periods and background checks, provided a program for some teachers to be armed and hired as school police, outlawed “bump stocks,” and prohibited violent or mentally ill people from owning firearms. It also banned “bump stocks.” Rick Scott, the governor of Florida, signed the legislation on March 9th, 2018, allocating around $400 million for its execution.

Bisexuality is Emma Gonzalez.
Her buzz cut is not a feminist message, but rather a measure to assist her to tolerate the scorching Florida weather claims fashion and leisure magazine Vogue.

Emma is one of the wealthiest and most well-known activists. According to our research, Emma Gonzalez has a net worth of $5 million, as reported by Forbes, Wikipedia, and Business Insider.