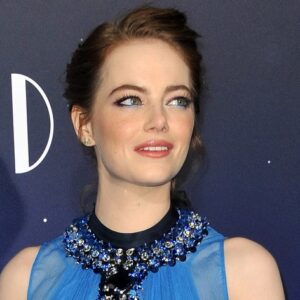 Emily Jean Stone is an Oscar-winning actress from the United States. She is regarded as one of the most talented and accomplished actresses of her generation, having reached the pinnacle of her career with the success of her 2016 film ‘La La Land,’ in which she starred. Stone, who was born in the state of Arizona in the United States, was lured to acting at a young age. She made her acting debut in a play called ‘The Wind in the Willows’ when she was 11 years old. She made her television debut in the 2004 episode of ‘The New Partridge Family,’ in which she played a supporting part. Throughout the next few years, she played in minor roles on numerous TV shows. Three years later, she made her cinematic debut in the American teen comedy ‘Superbad,’ in which she played a supporting role. She won a ‘Young Hollywood Award’ for her performance. Her role of Gwen Stacy, the protagonist character’s romantic interest, in ‘The Amazing Spiderman’ garnered her international fame. In the 2014 sequel ‘The Amazing Spiderman 2,’ she reprised her role. She has won several more honors in her career, including a ‘Golden Globe Award’ and a ‘National Board of Review’ award, in addition to the Academy Award for ‘La La Land,’ her most successful work to date.

Emily Jean Stone was born in Scottsdale, Arizona, in the United States, on November 6, 1988. Jeffrey Charles Stone, her father, was the founder and CEO of a general contracting firm, while her mother, Krista Jean Stone, was a stay-at-home mom.
Stone has described herself as being overly loud and domineering throughout her early years, despite having vocal issues as a child. Sequoya Elementary School and Cocopah Middle School were her schools. She used to get panic attacks, which had a detrimental impact on her social abilities. However, she began acting in local theater productions, which assisted her in overcoming such attacks.
Later, she enrolled in Xavier College Preparatory, but dropped out after only one semester to pursue her acting ambitions. She used to work part-time at a dog-treat bakery in between auditions for parts.

Emma Stone made her television debut in the American sitcom ‘The Partridge Family’ in 2004. She went on to perform minor roles in other TV shows like ‘Malcolm in the Middle’ and ‘Drive’ during the next few years. She made her cinematic debut in ‘Superbad,’ a teen comedy released in 2007. Greg Mottola directed the picture, which stars Jonah Hill, Michael Cera, and Seth Rogen. Stone played Jules, a character who appears in the film as a supporting character. Her outstanding performance earned her a ‘Young Hollywood Award.’ The following year, she appeared in a supporting part in the American comedy ‘The Rocker.’ The film, directed by Peter Cattaneo, follows a failing musician on a tour with his nephew’s band. Stone took on the role of Amelia in the film. She had a supporting role in the 2009 film ‘Ghosts of Girlfriends Past.’ The picture, directed by Mark Waters, was a moderate box office success. ‘Paper Man’ (2009), ‘Zombieland’ (2009), ‘Friends with Benefits’ (2011), and ‘Crazy Stupid Love’ were among her subsequent projects (2011).
Her role in the 2012 blockbuster film ‘The Amazing Spider-Man,’ which was based on the popular Marvel Comics superhero Spiderman, earned her a lot of attention and praise. The film is directed by Marc Webb and follows Peter Parker, a young New York kid whose world is turned upside down after he is bitten by a genetically mutated spider. As a result, he gets superhuman abilities and becomes Spider-Man. Gwen Stacy, Parker’s girlfriend, was played by Stone. The film was a major box office hit.
The following year, she starred in the American crime thriller ‘Gangster Squad,’ as well as the American comedy ‘Movie 43,’ and finally, the adventure animated comedy ‘The Croods.’ She also hosted the TV show ‘Saturday Night Live’ on a regular basis. She returned to the character of Gwen Stacy in ‘The Amazing Spider-Man 2’ in 2014. The picture, like its predecessor, was a box office smash. ‘Magic in the Moonlight’ (2014), ‘Aloha’ (2015), and ‘Popstar: Never Stop Never Stopping’ were among her subsequent features (2016).
‘La La Land,’ a 2016 American musical comedy, was her most recent and most successful role. Damien Chazelle wrote and directed the picture, which went on to win multiple Academy Awards. The tale centred around a musician and an aspiring actress who meet and fall in love. It was probably the most successful picture of the year. Stone earned an Academy Award for ‘Best Actress’ for her outstanding performance. One of Emma Stone’s most successful early works was ‘Marmaduke,’ a 2010 American family comedy film. The picture, directed by Tom Dey, featured Stone in a pivotal role. Owen Wilson, George Lopez, Steve Copgan, and Marlon Wayans were among the cast members. Commercially, the picture was a modest success. It received a ‘Teen Choice Award’ nomination. Another of Stone’s most important and successful projects was ‘The Amazing Spider-Man,’ a 2012 American superhero picture directed by Marc Webb. Along with Stone, the picture also starred Andrew Garfield, Rhys Ifans, Denis Leary, Campbell Scott, Irrfan Khan, and Martin Sheen, and was based on the popular Marvel Comics character Spiderman. The film follows Peter Parker, a teenager who gains abilities after being bitten by a genetically modified spider. With approximately $ 760 million in box office receipts, the picture was a major commercial success. The majority of the feedback was good. She reprised her role as Gwen Stacy from the prequel film in ‘The Amazing Spider-Man 2.’ The film was directed by Marc Webb and starred Andrew Garfield as the main and Emma Stone as his girlfriend, as well as Jamie Foxx, Dane DeHaan, and Campbell Scott. The film follows the life of Peter Parker, a regular guy who transforms into Spider-Man and fights criminals and super-villains. The movie was a box office hit, grossing $709 million worldwide. The 2016 American film ‘La La Land,’ which won Stone an Oscar for Best Actress, can be considered Stone’s most significant achievement to date. Ryan Gosling and Emma Stone starred in the picture, which was directed by Damien Chazelle. The plot revolves around the two characters, who, despite falling in love, are unable to be together owing to a variety of obstacles. John Legend, Rosemarie DeWitt, Finn Wittrock, and Jessica Rothe are among the other cast members. The picture was nominated for six Academy Awards.

Emma Stone dated Andrew Garfield, with whom she co-starred in ‘The Amazing Spiderman’ and its sequel in 2012 and 2013. They apparently broke up in 2015, according to reports. Emma Stone began dating comedian, writer, and director Dave McCary in 2017. They married in 2020, and their first child, a daughter, was born in March 2021.