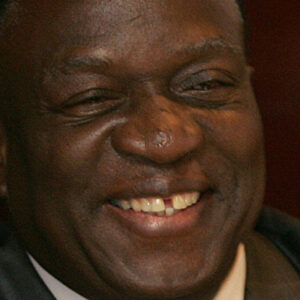 Emmerson Mnangagwa is a politician and the current president of Zimbabwe. Robert Mugabe was forced to quit as president on November 24, 2017, following a coup d’état. He remained a loyal associate of Robert Mugabe and served as vice president from 2014 to November 2017 during Mugabe’s reign. He was also a significant figure in the Zimbabwean War of Liberation and later became Minister of National Security, Robert Mugabe being the leader of the ruling party ZANU-PF and the Prime Minister. In the succeeding decades, Emmerson held a variety of posts in the Mugabe administration and proven to be a devoted ally. Born and raised in Shabani, Zimbabwe, Emmerson got military training in China and Egypt before forming the ‘Crocodile Gang’ to intimidate the white minority rule in Rhodesia. After causing mayhem as the leader of his gang, he was apprehended in 1965 and sentenced to death; however, he deceived everyone by demonstrating he was under 21 years old, causing the judicial system to overturn his death sentence. In prison, he met Robert Mugabe for the first time, sparking a political and personal bond that lasted decades, until Mugabe was ‘forced’ to retire in November 2017. When the military intervened and forced Mugabe to resign, the entire nation applauded.

Emmerson Mnangagwa was born in Zvishavane, central Zimbabwe, on 15 September 1942 to a staunchly anti-establishment farmer family. Due to his father’s constant struggle against the white rulers, his family was forced to relocate permanently to the neighboring country of Zambia.

After completing his education at Mumbwa Boarding School, he enrolled in a Building course at Kafue Trade School, but he had his sights set on Hodgson Technical College, the premier institution of higher education in the country. He passed the entrance examination and enrolled in a four-year City and Guilds Industrial Building Course program.

His involvement in political activism began in college when he was elected to the executive board of UNIP, a student organization. During one of his violent political activities against white supremacy, he was convicted guilty of setting fire to a structure. Consequently, he was ejected from the university.

He had no interest in academics and was outraged by the minority whites’ dominance over the local Africans. When he was dismissed from college in the late 1950s, he joined a startup and began his career, but the company failed and he remained unemployed for some time.

The United National Independent Party subsequently called him to assist them with coordinating their activities and recruitment. He became their secretary.

This did not sit well with the Egyptian authorities, who imprisoned Emmerson. After learning of this, Robert Mugabe traveled to Egypt to arrange their release.

Emmerson was dispatched to China in 1963 to acquire additional training in combat and guerrilla warfare. In 1963, other Zimbabwean groups with similar objectives accelerated their operations, and Emmerson was sent to China to receive additional combat and guerrilla warfare training. Emmerson met some other radical Zimbabwean youths in China, and the three of them created a group called as “Crocodile Group.”

With the assistance of his attorneys and physicians, he managed to convince the court that he was too young to be executed, and the death sentence was reduced to ten years in prison.

After ten years in Grey Street and Khami Prisons, he was sent to Harare Prison, where he met Robert Mugabe and other nationalists. He was later transported back to his parents in Zambia.

Emmerson began preparing for his law degree in college via correspondence with the University of London and completed it in the late 1970s at the University of Zambia. After a few years of practicing law and working for a private law company, he reconnected with Robert Mugabe during the Mozambican War of Independence.

There, he became good friends with him and worked as his personal bodyguard, eventually accompanying him to the Lancaster House Agreement discussions, which addressed the independence and destiny of the Republic of Zimbabwe.

Mugabe became president in 1988, following the political reforms, and Emmerson was given increased responsibilities within the ministry. He was turned over to the Justice, Legal, and Parliamentary Affairs Ministry. He was also appointed Foreign Minister and Minister of Finances for a little period. During his tenure in these positions, Emmerson introduced several new constitutional actions and amendments.

In 2000, Emmerson ran for a seat in parliament but was unsuccessful. President Mugabe intervened swiftly and handed him a place in the parliament as the speaker despite his lack of eligibility. In 2005, after losing yet another election, he served briefly as the Minister of Rural Affairs. Being named head of the Ministry of Rural Affairs was viewed as a significant demotion, and his status as a key politician declined.

In 2007, there was an attempt to compel the resignation of President Mugabe. It is alleged that certain senior military personnel backed by Emmerson were involved in the effort. All the participating officers were charged with treason and sentenced appropriately, however, Emmerson’s name was cleared.

According to reports, he was the mastermind of Mugabe’s 2008 presidential campaign, which secured him another term. Emmerson was appointed Minister of Defense in February 2009, then after Mugabe’s re-election as President in 2013, he was promoted to Minister of Justice and Legal Affairs.

The pressure on Mugabe to declare his successor increased, and in 2014 he confirmed Emmerson as his heir by naming him Vice President. The news quickly spread that Mugabe is handing up the majority of his presidential duties to Emmerson.

In 2016, Emmerson began to have ideological conflicts with Grace Mugabe, the First Lady of Zimbabwe, and the situation in the safe haven began to deteriorate.

She was subsequently suspected of poisoning Emmerson as his health deteriorated by the day, causing further political unease. Grace appeared to desire to succeed Robert Mugabe as president, and Emmerson was removed from his role as vice president on November 6, 2017. Emmerson then fled to South Africa out of fear for his life in response to several death threats.

On November 19, 2017, it was announced that Emmerson had become the leader of the ruling ZANU-PF party and had assumed the presidency. Mugabe initially refused to step down, but on November 21, 2017, under intense pressure, he resigned, paving the way for Emmerson Mnangagwa to become President of the Republic of Zimbabwe.
Emmerson was sworn in as the third President of Zimbabwe on November 24, 2017.

Farai and Emmerson Jr. are the children of Emmerson Mnangagwa and his wife, Auxillia.

Emmerson is one of the wealthiest and most popular politicians in the world. According to our analysis, Wikipedia, Forbes, and Business Insider, Emmerson Mnangagwa has an estimated net worth of $1.5 million.