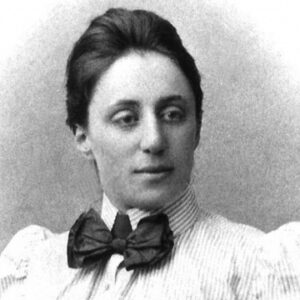 Amalie Emmy Noether, who was born on March 23, 1882 in Bavaria, Germany, made numerous contributions to the discipline of mathematics. She is primarily recognized for her research on chain conditions and ring ideals. Her contributions to the fields of group theory, number theory, group representations, algebra, and ring theory are highly regarded internationally. The University of Erlangen granted her a doctorate in mathematics. A considerable portion of her life was spent at the University of Gottingen in Germany. When the Nazis seized power in Germany, she was compelled to leave the country. She then traveled to the United States, where she worked as a guest lecturer at Bryn Mawr College in Pennsylvania until her death in 1935. More than forty articles were published during her lifetime. Her dynamic teaching style motivated many pupils to study Mathematics. Noether struggled throughout her whole life to pursue a career in mathematics. Continue reading to learn more about this talented mathematician.

Amalie Emmy Noether was born in Bavaria, Germany on March 23, 1882. She was the daughter of math professor Max Noether. She was not permitted to attend college preparatory schools, so she attended a “finishing school.” She specialized in English and French. The young Noether enjoyed cooking and playing the clavier.
Education

Noether graduated from Hohere Tochter Schule in Erlangen. In 1900, she completed the State of Bavaria’s examinations and became certified to teach English and French at schools for women. Soon after becoming a language instructor, Noether decided to study mathematics, which at the time was considered a difficult field for women to enter.

She attended lectures given by prominent mathematicians such as Minkowski, Hilbert, Blumenthal, and Klien. In 1907, she was awarded a Ph.D. in Mathematics after completing her doctoral studies at the University of Erlangen.

She conducted research at the Mathematical Institute of Erlangen without compensation from 1908 to 1915. In 1915, Felix Klien and David Hilbert asked Noether to join the University of Gottingen’s mathematics department. Although she was chastised by many for working at the university, she taught pupils under Hilbert’s name for four years.

She was given the title “Privatdozent” in 1919, which allowed her to lecture, but she was not compensated. In 1922, Noether was appointed as an associate professor with lowly pay.

Because she was a woman, a Jew, and a social democrat, she was not accorded the position of professor despite her excellent writing and knowledge. During 1928 and 1929, Noether was a visiting professor at the University of Moscow.

In 1930, she taught at the University of Frankfurt. In 1932, she delivered a speech at the International Mathematical Congress in Zurich. She was a member of the mathematics department at Gottingen until 1933.

In 1933, she immigrated to the United States and taught as a guest professor at Bryn Mawr College in Pennsylvania since she was unable to continue her career in Germany when the Nazis assumed power. She was paid a full salary and recognized as a legitimate faculty member. She also lectured at Princeton’s Institute for Advanced Study.
Works And Achievements
Noether produced numerous articles while employed at the Mathematical Institute of Erlangen. She began researching theoretical algebra and collaborated with the algebraist Ernst Otto Fischer on her publications. She also collaborated with Felix Klein and David Hilbert on Einstein’s theory of general relativity.

The Contributions of Noether

The work of Noether was separated into three epochs. During the first period, from 1907 to 1919, she focused on algebraic invariant theory, Galois Theory, and physics. Noether demonstrated two significant theorems for elementary particle physics and general relativity. Noether’s Theorem, one of her most important contributions to the development of modern physics, is one of her theorems.

From 1920 to 1926, she focused on the theory of mathematical rings during the second period. She created the abstract and conceptual approach to algebra, which led to the development of various principles that combine topology, logic, geometry, algebra, and linear algebra. Her contributions advanced abstract algebra.

Her research-based on chain conditions on the ideals of commutative rings was highly regarded by mathematicians worldwide. Her 1921 article titled “Idealtheorie in Ringbereichen” or “Theory of Ideals in Ring Domains” laid the groundwork for commutative ring theory.

Noether had surgery to remove a uterine tumor, but she passed away in 1935 due to post-operative infection. Her students adored and regarded her highly. After World War II ended, the University of Erlangen recognized her accomplishments.

In Erlangen, a gymnasium dedicated to mathematics was named after her. The ashes of Noether were interred at the Bryn Mawr Library. Her contributions to mathematics will forever be recognized.

Emmy Noether has an estimated net worth of $7 million dollars and earns mostly as a physicist, university professor, and mathematician. We lack sufficient evidence regarding Emmy Noether’s automobiles and lifestyle.