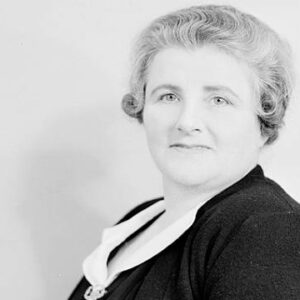 Enid Lyons was Australia’s first female member of the House of Representatives. She was a well-liked politician and the first woman to be appointed to the federal Cabinet. Prior to becoming an independent politician, she was the wife of Australia’s Prime Minister, Joseph Lyons. As the prime minister’s wife, she was involved in a variety of official duties and campaigning for the party, and is widely regarded as the most devout prime ministerial wife in Australian political history. As the mother of twelve children, she juggled her official responsibilities effectively while also managing her large family. Enid was born into an ambitious family and encouraged to pursue a professional education. She graduated from Teacher’s Training College and began her career as a teacher. She eventually married Joseph Lyons, a prominent politician who ascended to the position of Prime Minister. Following her husband’s death, she entered politics herself and established a successful career as a politician. A gifted speaker, she delivered speeches on a variety of subjects, many of which were particularly relevant to women, as well as on national issues. Even after retiring from politics, she remained active, serving as a commissioner of the Australian Broadcasting Corporation in her later years.

Enid Muriel Burnell was born on 9 July 1897 in Smithton, Tasmania, as the daughter of William and Eliza Burnell. She was the younger of two sisters. Her mother, a strong-willed and ambitious woman, was an activist in Tasmanian Labor and community groups.
Her mother desired that all of her daughters receive an excellent education and pursue professional careers. Enid inherited her mother’s diligence and ambitions as a child. After graduating from Burnie State School with a primary education, she attended Teacher’s Training College and became a professional teacher.

Enid married at a young age. While still a teenager, she met a man named Joseph Lyons, a rising Tasmanian Labor politician. Lyons was taken aback by the young woman’s audacity and ambition and proposed marriage to her. The couple married in 1915, when Enid was only 17 years old.

Over the years, her husband’s political career flourished. Their family also expanded rapidly, and the couple welcomed several children. Enid Lyons established herself as a devoted wife and mother, shouldering all family responsibilities while her husband pursued his career.

Along with her familial responsibilities, she was an active participant in her husband’s career. She was instrumental in the 1922 Tasmanian election campaigns and delivered speeches to women on a variety of issues. In 1923, Joseph Lyons was appointed premier.

After her husband was elected to the House of Representatives in 1929, she became more involved in his political career and enthusiastically supported his ambitions.

In 1931, with her backing, he broke away from the Australian Labor Party and joined the United Australia Party. Joseph reached the pinnacle of his career in 1932, when he became Australia’s Prime Minister.

As the prime minister’s wife, her political responsibilities multiplied. She had already given birth to 11 children before giving birth to her 12th and final child in 1933. Managing a large family on top of her political responsibilities took a toll on her health, but she worked as hard as ever. She traveled extensively, attending meetings and delivering speeches in addition to running her household and overseeing her children’s education.

Enid was devastated when Joseph Lyons died in 1939. She fell into a deep depression, but she recovered completely with the help of her children. She ran for the House of Representatives after being encouraged by her family to do so.

Enid Lyons was elected to the Tasmanian House of Representatives in August 1943, becoming the first female member. Her inaugural address, in which she discussed social security, the declining birth rate, housing, the family, and the critical importance of anticipating postwar policies, was a rousing success.

She became a popular politician by voicing her opinions on a variety of issues, many of which were particularly relevant to women, such as baby foods, child endowment, maternity services, service women’s pay, and widows’ pensions. She also spoke persuasively on national-level issues such as nuclear energy, finance, population, and industry.

In 1946 and 1949, she was easily re-elected. In 1949, she was appointed Vice-President of the Executive Council by Menzies. She was afflicted with a variety of ailments during this time period, which forced her to resign from politics in 1951.

Following her retirement, her health improved, and she became a newspaper columnist in 1951. She also served as the Australian Broadcasting Corporation’s commissioner from 1951 to 1962.

Enid Lyons is best remembered as the first woman elected to the Australian House of Representatives when she won the UAP’s Division of Darwin in north-western Tasmania in the 1943 election.

Awards and Accomplishments of Enid Lyons

On Australia Day 1980, she was appointed a Dame of the Order of Australia (AD).

In April 1915, she married Joseph Lyons, a rising politician. She was 17 years old and Joseph was 35 years old at the time of their marriage. They had 12 children, one of whom died in infancy due to an illness. In addition to her hectic political responsibilities, she was a devoted wife and mother.

Throughout her later years, she battled a slew of health problems, including cancer and a thyroid condition. Despite her failing health, she remained active throughout her life and died on 2 September 1981, at the age of 84.

The estimated net worth of Enid Lyons is unknown.