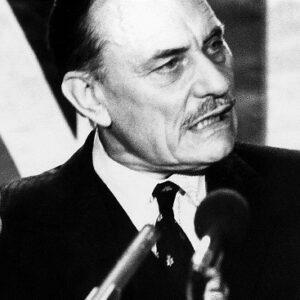 Brigadier John Enoch Powell was a British politician who served in the House of Commons and as the Minister of Health. He is primarily known for his strong anti-immigration beliefs, particularly his infamous “Rivers of Blood” speech, which sparked widespread outrage. Powell had the backing of a majority of the British people, and he helped the Conservatives win the general election in 1970. He was openly racist and asked that non-white immigrants be expelled back to their homelands, openly opposing the non-white population in the United Kingdom. In the perspective of the public, his ideas made him a man who was both liked and despised. He was a classical scholar and poet before entering politics, and he became a professor of Ancient Greek before he reached 25. He had also served in the army and had poetry published. When he entered politics, he carried with him a wealth of expertise and knowledge in a variety of fields. He was a brilliant student who, as a university student, had little interest in politics. Before joining the military, he pursued a career in academia. Due to India’s independence in 1947, he was unable to fulfill a long-held desire of becoming Viceroy of India. As a result, he entered British politics, where he became known as an outspoken conservative.

Albert Enoch Powell and his wife Ellen Mary had only one kid. His father was a former elementary school principal, while his mother was a former teacher.
Before attending King Edward’s School, he attended King’s Norton Grammar School for Boys for his primary schooling.

He matriculated in Trinity College, Cambridge, in 1930, and was highly affected by the poet A. E. Housman and the German philosopher Friedrich Nietzsche’s writings. He was a brilliant student who stayed away from politics.
He enrolled in an Urdu study because he aspired to become Viceroy of India and wanted to learn an Indian language.

He was appointed Professor of Greek at the University of Sydney in 1937, when he was only 25 years old, after serving as a Fellow at Trinity College and authoring academic works in Greek and Latin.
In 1939, he went home and enlisted as an Australian in the Royal Warwickshire Regiment; he was quite enthusiastic about joining the war. In 1940, he was sent to the Intelligence Corps. By 1942, he had risen to the position of lieutenant colonel, and by 1944, he had risen to the rank of full colonel. He rose to the rank of Brigadier at the end of the war.

When India gained independence in 1947, his desire to become Viceroy of India was dashed, so he joined the Conservatives and worked for the Conservative Research Department.
In the general elections of 1950, he was elected as a Member of Parliament (MP) for Wolverhampton South West, and his first speech was on a White Paper on Defense.

In 1955, he was appointed as Duncan Sandys’ parliamentary secretary at the Ministry of Housing. The next year, he spoke in support of the Housing Subsidies Bill in the Commons, as well as the Slum Clearance Bill. At the subcommittee on immigration control, he campaigned for immigration control.
In January 1957, he was offered the position of Financial Secretary to the Treasury, which was the most important office outside of the Cabinet. In January 1958, he resigned after a year as a protest against government intentions to raise spending.

He was appointed Shadow Secretary of State for Defence in 1965. He presented a new defense policy and supported Britain’s nuclear weapons in his first speech as Prime Minister.

In 1968, he gave a lecture on immigration that became known as the “Rivers of Blood” speech. He warned of the dangers of unfettered non-white immigration into Britain in this address. The speech sparked widespread outrage, and he was accused of being a racist.
The day after the speech, he was fired from the Shadow Cabinet. However, the people viewed him as a hero as a result of his speech, and he received widespread support across the United Kingdom.

After winning the general elections in 1974, he returned to parliament as an Ulster Unionist MP for South Down. He was a staunch supporter of the Ulster Unionists’ wish to remain a member of the United Kingdom.
He was a vehement anti-American who alleged in 1984 that the Central Intelligence Agency assassinated Earl Mountbatten of Burma. He also accused the US of assassinating members of Parliament Airey Neave and Robert Bradford. These claims, however, were denied.

His political career came to an end when he lost his seat in the 1987 general elections.
He was a clever man with a distinguished military career who became famous for his infamous ‘Rivers of Blood’ speech, in which he opposed Commonwealth immigration and anti-discriminatory legislation.

During his illustrious military service, he received numerous decorations and honors, including the British War Medal, Africa Star, and Military MBE.

In 1952, he married Margaret Pamela Wilson. His wife was a former Conservative Central Office colleague. They had two daughters together.
In 1992, he was diagnosed with Parkinson’s disease. At the age of 85, he died in 1998.

Enoch is one of the wealthiest politicians and one of the most well-known. Enoch Powell’s net worth is estimated to be $1.5 million, according to Wikipedia, Forbes, and Business Insider.

In a BBC nationwide survey in 2002, this former British army veteran, classical scholar, and politician was nominated to the list of the 100 Greatest Britons of All Time.