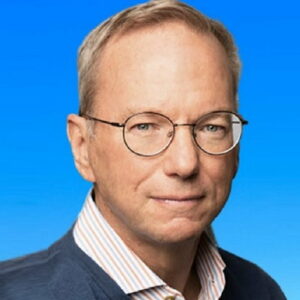 Eric Schmidt is an American software engineer who presently serves as the executive chairman of Alphabet Inc., a holding corporation formed to directly own many Google-related companies, including a slimmed-down version of Google. Schmidt had been the Chief Executive Officer (CEO) of Google for a decade before being named executive chairman of Alphabet, and during his tenure as CEO, the firm dramatically expanded its product line while cultivating a culture of creativity among senior management. From a young age, he was groomed to succeed by his well-educated and ambitious parents. Schmidt, who was intelligent, curious, and motivated as a child, excelled not just in academics but also in sports and was a long-distance runner in high school. He enrolled at Princeton University with the intention of becoming an architect. He soon learned, however, that he preferred electrical engineering and switched his major. He continued his education at the University of California, Berkeley, where he also earned his doctorate. Before becoming the CEO of Google in 2001, he worked for a number of companies, including Sun Microsystems. He has also served on the Carnegie Mellon University and Princeton University boards of trustees.

Eleanor and Wilson Emerson Schmidt gave birth to Eric Emerson Schmidt on April 27, 1955, in Washington, D.C. His father was a professor of international economics at Virginia Tech and Johns Hopkins University, while his mother held a Master’s degree in psychology. Eric is the younger of two brothers.

He was a bright and athletic young man who excelled in school and ran large distances. In 1972, he received his diploma from Yorktown High School in Arlington, Virginia.

He desired to be an architect as a youth and enrolled at Princeton University as an architecture major. He soon learned, however, that he preferred electrical engineering and switched his major. In 1976, he earned a bachelor’s degree in science.

He went on to the University of California, Berkeley, where he received his M.S. in 1979. He planned and constructed a network connecting the campus computer center with the CS and EECS departments during his employment at the institution.

Following the completion of his Master’s degree at the same university, he worked on his Ph.D. and received his doctorate in EECS in 1982. The issues of managing dispersed software development were the subject of his dissertation.

He began his career at Bell Labs, which was one of his first employment. He rewrote Lex, a program for creating lexical analyzers for the Unix computer operating system, with Mike Lesk. He developed on a regular-expression description, which he turned into a useful tool for compiler development.

In 1983, he became Sun Microsystems’ first software manager. He had a lot of technical knowledge and a lot of business sense, and he worked his way up through the company’s levels. Before becoming vice president and general manager of the software products business, he served as director of software engineering.

He subsequently ascended through the ranks of Sun Technology Enterprises to become vice president of the general systems group and president. He had earned a reputation as a very efficient company executive by the late 1990s. In 1997, he was named CEO and Chairman of the Board of Novell.

Larry Page and Sergey Brin, the founders of Google, interviewed Schmidt in 2001. Google was still a fledgling firm when it was founded in 1998, and the founders were seeking for someone with expertise to lead it. Schmidt was the ideal candidate for Page and Brin, and he was named Google’s CEO in August.

Schmidt’s first task as CEO was to oversee the vice presidents’ and sales organization’s activities, as well as to develop the organizational infrastructure required to continue Google’s rapid expansion. Under his leadership, the company experienced remarkable expansion and diversification, and it became one of the world’s fastest growing companies.

Schmidt remained as executive chairman of the company after Page took over as CEO in 2011. He was in charge of developing alliances and larger commercial contacts, as well as government outreach, in this position. He also provided commercial and policy advice to the CEO and top leadership.

In 2015, Google undertook a major organizational restructuring that resulted in the formation of Alphabet Inc., a holding company that owns or is affiliated with various Google companies, including Google itself. Schmidt was named executive chairman of Alphabet. He is also a member of President Barack Obama’s President’s Council of Advisors on Science and Technology (PCAST), in addition to his corporate obligations.

In 2006, Eric Schmidt was elected to the National Academy of Engineering, and in 2007, he was named a fellow of the American Academy of Arts and Sciences.

In 1980, he married Wendy Susan Boyle. Sophie and Allison are their two daughters. The couple split up in 2011, although they never divorced. Schmidt has a reputation as a playboy, and while being married, he dates other women frequently. TV host Kate Bohner, musician Chau-Giang Nguyen, PR executive Marcy Simon, and TV producer Lisa Shields are among his girlfriends.

In 2006, Eric Schmidt and his wife Wendy founded The Schmidt Family Foundation to address issues with the responsible use of natural resources and sustainability. The Energy Foundation, the California Academy of Sciences, the Regeneration Project, the Columbia Center for Children’s Environmental Health, and Green for All are among the organizations that have received funds from the foundation.

The Schmidts founded the “Eric & Wendy Schmidt Data Science for Social Good Fellowship,” a summer school program at the University of Chicago for aspiring data scientists. In 2009, the Schmidts endowed the Schmidt Transformative Technology Fund at Princeton University with $25 million.

Eric Schmidt has a net worth of US$18 billion.