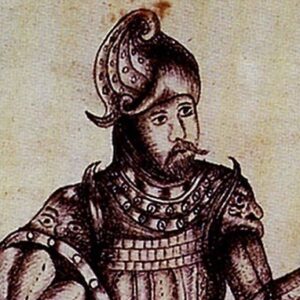 More Facts of Erik the Red

Erik the Red was the founder of Greenland’s first Norse settlement. He named the region Greenland after the Inuit people who had lived there. He was born as Eirkr orvaldsson in Rogaland, Norway, according to medieval and Icelandic saga traditions. Due to his father’s expulsion from the country due to a murder accusation, the family relocated to Hornstrandir in northeastern Iceland. Erik, too, was suspected of perpetrating some killings after a few years and was sentenced to three years in exile. Forced to locate a new home, he started on a voyage to the west, where he immediately discovered a country with fruitful conditions conducive to the establishment of colonies. He returned to Iceland, ecstatic at his finding, to tell his people about the “green country” he had discovered on his journey. His description of the new location pleased his people, and he was able to persuade a group of people to join him on his second voyage to the same area. He eventually became the first European to create prosperous colonies in Southern Greenland. His son, Leif Eriksson, went on to become a well-known explorer in his own right, carrying on his father’s heritage by being one of the first Europeans to visit North America.

He was born around 950 in the Jren area of Rogaland, Norway, as Eirkr orvaldsson (also known as Erik Thorvaldsson). Orvald Svaldsson was his father’s name (also called Thorvald Asvaldsson).

Thorvald was exiled from Norway around 960, during King Harald Fairhair’s reign, for killing some people. At the time of the incident, Erik was a little boy.

The father sailed west from Norway with his family, eventually settling at Hornstrandir in northwestern Iceland. Thorvald passed away before the year 980.

Erik grew up to be an adventurous and fiery-tempered young man, earning the moniker “Erik the Red” for his fiery red hair, beard, and temper.

He was exiled from Iceland for three years after reportedly killing some people in the year 982, similar to how his father had been deported from Norway years before.

He decided to embark on an adventure to explore new areas while in exile. Around 982, he set out with a small group of men from Snfellsjökull, one of Iceland’s westernmost points, and arrived on the opposite shore of a little-known landmass.

His soldiers approached the southern edge of the island and arrived near Qaqortoq (previously Julianehb) on an island at the mouth of Eriksfjord (today known as Tunulliarfik Fjord). Erik spent the next two years touring the west and north, naming the places he visited along the way.

Many portions of the territory appeared to be ice-free and had characteristics favorable to future growth and development, therefore he dubbed the country “Greenland.”

He spent the first winter on the island of Eiriksey and the second winter in Eiriksholmar during his exploration (close to Hvarfsgnipa). During his final summer in Iceland, he traveled as far north as Snaefell and into Hrafnsfjord.

Erik returned to Iceland in 985 or 986 after completing his banishment. He shared intriguing tales of his exploits in the new land he had explored with him. He gave a detailed description of Greenland and persuaded the locals that the new territory was ideal for founding new communities.

Erik the Red, who possessed tremendous persuasion skills, was able to persuade the people that Greenland held great potential. He sailed off again with a fleet of 25 ships from Iceland after obtaining widespread backing.

Over the course of the perilous journey across the sea, several of the ships turned back or were lost or destroyed with their crew. Only 14 of the 25 ships are thought to have arrived safely in a region known as Eystribygd (“Eastern Settlement”).

The colony had roughly 400-500 settlers at the start. Erik became the main chieftain of Greenland after successfully establishing settlements there. Over the years, he accumulated both wealth and respect.

The colonists prospered in their new home and were soon joined by a group of immigrants who had traveled all the way from Iceland to escape overcrowding in their own country.

The thriving hamlet expanded to over 5000 people and covered a large area along Eriksfjord and nearby fjords. However, soon after, something catastrophic occurred, almost destroying the colony.

In 1002, another group of Icelandic people arrived. However, these newcomers brought with them a terrible sickness that quickly swept Greenland’s population.

The disease killed several of the colony’s most powerful citizens and put the colony’s survival in jeopardy. Despite this, the colony lasted until the 15th century before being wiped out due to a variety of factors.

Erik the Red is credited with establishing Greenland’s first Norse settlement. Norsemen may have discovered Greenland before him, according to Icelandic sagas, but their attempts to populate the country were unsuccessful.

As a result, Erik is recognized as being the first permanent European resident in Greenland to build a settlement.

Erik the Red had four children with his wife, jóhildr (Thjodhildr): one daughter and three sons. Later in life, his son Leif Eriksson became a well-known adventurer.

He died in 1003 as a result of the plague that wiped out the vast bulk of Greenlandic settlers.

His net worth is a whopping $10 million. He has a large social media following in addition to his acting career.

Erik made the most of his money from his Yeezy footwear. While he had inflated the scale of his company over the years,