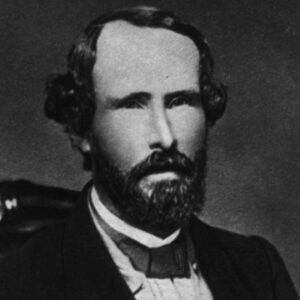 Eston Hemings was an African-American slave who was born to Sally Hemings, one of Thomas Jefferson’s slaves, and is believed to have been fathered by Jefferson. Historians have long maintained that Sally Hemings’ children were fathered by none other than Thomas Jefferson, based on his brother Madison’s memoir, contemporary newspaper accounts, entries in ‘Thomas Jefferson’s Farm Book,’ as well as census and property records. However, partly as a result of Eston Hemings and his descendants’ attempts to conceal their ancestry and pass as white people in order to avoid racial discrimination, there have been controversies surrounding his father’s identity. It was complicated further by later Jefferson family members, such as Thomas Jefferson Randolph, who claimed Peter Carr was the father of Sally Hemings’ children. However, one male descendant of Eston who underwent DNA testing at the turn of the twentieth century matched the rare Thomas Jefferson male line, but not the Carr male line.

Hemings, Eston Jefferson was born in Monticello, Virginia, on May 21, 1808, to Sally Hemings, a mixed-race slave. In 1998, DNA evidence confirmed the widely accepted conclusion that he was the son of Thomas Jefferson, the third President of the United States and the Declaration of Independence’s principal author.

His mother was the youngest daughter of widowed planter John Wayles and Betty Hemings, a mixed-race slave, and thus was three-quarters European in ancestry. She was also the step-sister of Martha Wayles, Jefferson’s cousin and later wife.

Martha Wayles, who was ill and died at the young age of 33, made Jefferson promise she would never marry again before she died. He later developed feelings for his 16-year-old slave Sally Hemings, whom he had brought to Paris with her brother James Hemings.

Eston Hemings was the youngest of his mother’s six children, who are all believed to be Jefferson’s. Four of his siblings, including his brothers Beverley and Madison, and sister Harriet, survived to adulthood.

Despite his birth as a slave, he was allowed to live with the Jefferson family and was required to perform light duties such as running errands.

He, like his older brothers Beverley and Madison, began learning woodworking at the age of 14 from his uncle John Hemmings, who was Monticello’s master carpenter.

Following in the footsteps of his father, who regularly played the violin as a child, he and his brothers began playing the instrument at a young age as well.

According to some sources, Sally Hemings agreed to return to the United States only after Jefferson promised to free her children when they reached the age of majority.

Notably, he did not pursue Beverley and Harriet when they escaped at the ages of 24 and 21, respectively, and left instructions in his will for the release of Eston and Madison upon their attainment of maturity.

Eston, Madison, and their three uncles were freed in 1827, one year after Thomas Jefferson’s death, under the terms of Jefferson’s will, which also allowed them to remain in Virginia following their freedom, unlike the majority of freed slaves.

While Jefferson did not explicitly instruct his daughter Martha to emancipate Sally, she informally allowed her to live as a free woman by allowing her “her time.”

In 1830, the two brothers and their mother moved from Monticello to Charlottesville, where they built a two-story brick and wood house.

They were legally white under Virginia law at the time, as a result of their predominance of European ancestry, and were recorded as such in the 1830 census.

Eston Hemings and his elder brother, Madison, established themselves as woodworkers and carpenters in Charlottesville, Virginia, following their emancipation. Both married free women of color and resided in their mother’s house in Charlottesville until her death in 1835.

Madison remained in their Charlottesville home following their mother’s death, but Eston and his family relocated to Chillicothe, a town in southwest Ohio’s free state, in 1837. His first two children were born in Charlottesville, and his third in Chillicothe.

He used his musical abilities to establish a successful career as a violinist and fiddler there. He also led a dance band that gained popularity throughout southern Ohio, owing to his “personal appearance and gentlemanly demeanor,” according to reports.

Despite a successful career, the state’s Black Laws denied him the right to vote or hold office, and his children were denied access to public schools. While attending Manual Labor School in Albany, a village in Athens County, Ohio, his daughter Anna was introduced as Thomas Jefferson’s granddaughter.

Following the passage of the Fugitive Slave Act in 1850, towns along the Underground Railroad were infested with slave catchers who frequently captured and sold free people into slavery as well.

Eston Hemings relocated to Madison, Wisconsin in 1852 to ensure his family’s safety and dropped the black surname Hemings in favor of the white Jefferson surname.

While his elder brother Madison lived his entire life as an African-American, Eston followed in the footsteps of his two other siblings, Beverley and Harriet, who identified as European-Americans following their emancipation from slavery. He died in Madison, Wisconsin, on January 3, 1856, at the age of 47.

His decision to pass as white aided in the education of his children. His eldest son, John Wayles Jefferson, was the proprietor of the American House hotel in Madison and later served as a US army officer, commanding the Wisconsin 8th Infantry.

Jefferson married his daughter, Anne Wayles, to Albert T. Pearson, a carpenter and Civil War captain. They had a son, Walter Beverly Pearson, who became a successful industrialist in Chicago. Beverly Frederick Jefferson, his youngest child, assumed responsibility for the hotel following his elder brother’s military service and later joined the Union Army as a Civil War veteran.

While Eston Hemings and his siblings were widely believed to be President Thomas Jefferson’s children, his oldest grandson, Thomas Jefferson Randolph, misled historian Henry Randall by providing false information. To divert attention away from his grandfather, he had stated that Sally Hemings’ children were fathered by his uncle and Jefferson’s nephew Peter Carr.

Following the 1974 publication of biographer Fawn Brodie’s book ‘Thomas Jefferson: An Intimate History,’ one of Eston’s descendants became curious about her ancestry and contacted the author. Subsequently, John Weeks Jefferson, a male member of her family, matched the Y-chromosome of the Thomas Jefferson male line in a 1998 DNA test, conclusively ruling out any connection to the Carr line.