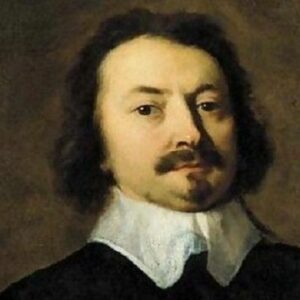 Evangelista Torricelli, an Italian mathematician and physicist, is credited with inventing the barometer and laying the groundwork for integral calculus. Evangelista was transferred to his uncle, a Camaldolese monk, when he was born to middle-class parents. Initially, he attended a Jewish school in Faenza. Torricelli was taken to Rome by his uncle, who recognized his mathematical skill and put him to the school of Benedetto Castelli, who was also a monk like his uncle. Castelli brought Torricelli to Galileo, and Evangelista functioned as the great scientist’s secretary and assistant during the final months before his death. After Galileo’s death, the Duke of Tuscany gave Evangelista his position as court mathematician and philosopher, which Torricelli accepted and held until his death. During his time in Rome, he became friends with Bonaventura Cavalieri, a brilliant mathematician. Torricelli was the first to produce a vacuum for an extended period of time and establish the barometer’s essential principle. Aside from his theoretical work, Evangelista was an excellent instrument maker who made a lot of money by grinding lenses. Continue reading to learn more about this prominent scientist’s scientific contributions.

Torricelli was the eldest of three children born to Gaspare Torricelli and Caterina Angetti on October 15, 1608 in Faenza, Italy. His father worked in the textile sector and had a modest income.

He saw his eldest son’s abilities early on, but he understood he lacked the money to help him. Torricelli was assigned to his uncle, Brother Jacopo, who assisted him with his studies until he was accepted into the Jesuit School.

Torricelli enrolled in a Jewish college in 1624, where he studied philosophy and mathematics. While some sources claim he was accepted to Jesuit College in Faenza, others suggest he graduated from Rome’s ‘Collegio Romano.’ Torricelli may have entered Collegio Romano after finishing his education in Faenza after his father’s death, when his mother relocated to Rome.

Torricelli’s uncle recognized his brilliance and recommended him to Benedetto Castelli, a professor at Rome’s ‘University of Sapienza.’ He learned a variety of sciences from Catelli, including mechanics, hydraulics, astronomy, and mathematics.

Castelli was a Galileo pupil, and accidental contact with the famous scientist, in which Torricelli introduced himself as a mathematician, led to his friendship with him.

In 1632, Galileo and Torricelli exchanged their first letters, with Torricelli writing on behalf of his professor Castelli. He went on to explain his interest in mathematics, his exposure to classical writings, and his conviction in the Copernican idea in his letter.

Torricelli was employed as Giovanni Ciampoli’s secretary in 1633, the year of Galileo’s trial. Galileo had a friend named Giovanni, and Torricelli served as his secretary for nine years.
Torricelli had completed most of his work by 1641, which was ultimately published in three parts as ‘Opera Geometrica.’
Torricelli also worked on and improved Galileo’s idea of the parabolic motion of projectiles around this time, and showed it to Castelli. Castelli was so taken with Torricelli’s manuscript that he wrote to Galileo about it.
While on a trip to Venice in 1641, Castelli presented Galileo with a copy of Torricelli’s work and requested that he be appointed as Galileo’s assistant.

The young mathematician arrived at Galileo’s house on October 10th, 1641, and remained with the maestro and Viviani, another of Galileo’s assistants.

Galileo died in 1642, therefore their relationship was short-lived. Torricelli was appointed to Galileo’s position by Grand Duke Ferdinando II of Tuscany when he returned to Rome after Galileo’s death, but he did not get the same title of Court Philosopher as his predecessor.

Torricelli engaged in a variety of scientific pursuits during his time in Florence, becoming friends with painters Salvatore Rosa, Carlo Dati, and hydraulic engineer Andrea Arighetti. Their friendship led to the establishment of the ‘Accademia dei Percossi,’ where the former is said to have narrated his comedies.

Torricelli came up with the idea for the mercury barometer while trying to solve the difficulty of raising the water level with a suction pump. He discovered a reliable method of establishing a long-lasting vacuum by using mercury.

Torricelli’s law of fluid dynamics and Torricelli’s trumpet were also discovered by him. He attempted to bridge the gap between Calculus and Greek geometry in mathematics.

Galileo’s idea inspired Torricelli, who authored a dissertation on mechanics called ‘De Motu,’ or Concerning Movement. ‘Discorsi e dimostrazioni matematiche intorno a due nuove scienze’ was essentially an expansion of Galileo’s idea on the motion of projectiles.

Torricelli published his geometry works in three sections in the ‘Opera Geometrica’ in 1644. Due to the Grand Duke’s generosity, this was the only book that was published during his lifetime. In comparison to Cavalieri’s complicated theories, the publications featured clear presentations, making geometry easier to understand.

On October 25, 1647, this illustrious scientist died and was buried in Florence’s ‘Basilica of San Lorenzo’ church.

After Galileo’s death, Grand Duke Ferdinando II of Tuscany appointed Torricelli as mathematician and philosopher, a position vacated by Galileo.

Torricelli created a number of comedies, which he revealed in ‘Accademiadei Percossi’ to his distinguished acquaintances. These comedies were never produced, but according to his memoirs, which he dictated to Lodovico Serenei from his deathbed, they were written by him.

The estimated net worth of Evangelista Torricelli is unknown.